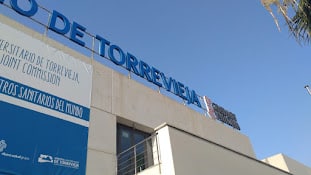 The ongoing crisis at Torrevieja is about to enter into a new chapter, following the resignation of the department’s medical director, oncologist Dr. Juan Carlos Toral, right-hand man of manager Pilar Santos, who has carried out the controversial process of reverting to public health from the public-private concession managed by Ribera Salud of the university hospital and your area, a decision which coincides with the announcement of more protests.

Toral’s resignation is said to be for “personal reasons”, and not as a result of the ongoing crisis, according to the working committee at the hospital, despite him being one of the main defenders of the reversal.

It has not been made public as to whether the oncologist will continue in his medical position or leave the hospital. In any case, the rest of the team continues, both the manager and her deputy, Julio Blázquez, explain the unions.

This resignation occurs in the “truce” period that the unions have given to the Ministry of Miguel Mínguez to dismiss the manager and solve the serious welfare problems that have worsened this summer. The workers’ representatives are already preparing demonstrations at the hospital. And even in Valencia, because they claim that the “grace” period granted to Mínguez has expired.

At the same time, a patient demonstration has already been called for September 27, to which the Plataforma de Afectados por la Reversión, one of the main critics of the change, will attend, along with representatives of the local councils in the area.

The mayor of Torrevieja himself, Eduardo Dolón, has had to make public all the steps he is taking with the Conselleria in order to solve some of the problems facing the university hospital, although much of the criticism has been more political than practical.

From the PP, the deputy José Juan Zaplana, assures that “uncertainty is taking over the health of patients, professionals and now management positions, the resignations of different positions are taking place due to the dissatisfaction and lack of foresight of the government that is causing health care to fall and increasing waiting lists and pressure on professionals”.

“These resignations are going to have a knock-on effect and the health crisis is going to become even more acute with the loss of knowledge and experience and the brain drain that Puig’s inefficiency is producing,” concludes the deputy.