Tipsy Toad hosted both K.O.Cup and Auxiliary Cup finals, Thursday last, the excellent venue totally rearranged to accommodate the 4 teams involved and many supporters. The committee extend their thanks to Toad’s hosts Lisa and Andy for their their mid match fayre and generous  prizes donated for the presentation.  Both matches concluded all team games for the season, with just Mens and Ladies singles / pairs remaining. Competition details within this article, entries still available, but limited.

Presentation night falls on Thursday, May 19th at Los Cucalos, details are with each team captain, to include choice of menu. All league members and guests are most welcome, to enjoy table magic, a three course dinner, award presentation and music till very late.

League champions Gap completed a fine League and Cup double, their opponents Toppers taking the champs to the 10th leg of the final. Toad won the bull to determine first throw, Lee Maiden outstanding with 100,140,140 and a D2, Darren Sanderson replying with 2×100. Gap responded with a James Brown ton, Gordon Cowan adding 125,140 and D2 for 1-1.

You would have gambled your last tenner on Brown, Sanderson, Cowan, winning the next, but a Gildea 140 and another ton from Maiden followed by S17,D1 made it 1-2. A Sam Salt 140 and a Cowan D4 levelled the tie. The next two legs before the break, comfortably went Gap’s way via Brown 121, and Carlos Escansiano 100, D5, plus Sanderson and Bliss Wright 100, D1 taking the score to 4-2. 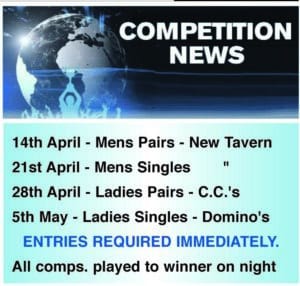 Division 2 champions the Rock, disappointingly found the going a little tough, many of their stars not quite finding the form that won them the title. Graham Solomans led Rock off with a ton, countered by a Jay Wilkinson 100 and D8. Mike Tierney made it all square on D4, Alan Havelock recording a ton. Legs 3 and 4 went Hubs way, Dylan Fitzsimmons D4 and Wilkinson D16, gaining the all important doubles, John Rodford finding T20 with ease. Billy Dolling nailed the Rocks second leg on D2, for 3-2.

Concluding the half Paul Durrant doubled on 20 for a 79 out and a half time lead 4-2.

Solomans resumed the game with a win on D4, Rodford hitting 100,140,100 but needing a further 20+ darts to complete the 501, opponent Dolling 100, unable to capitalise on Rodford’s shortcomings. Fitzsimmons D10 and Wilkinson a 56 out got the Hubbers over the line for a 7-3 victory. The two remaining legs were shared Durrant D10 and Tierney 100, D11. MOTM – Rodford – Tierney.