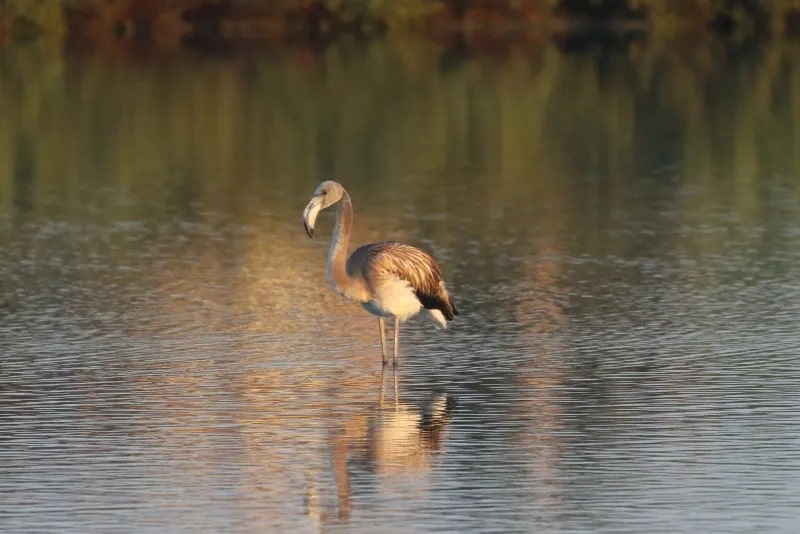 The Amigos de los Humedales del Sur de Alicante (AHSA) ornithological group has reported that the young flamingos born this year in the enormous breeding colony of the Torrevieja lagoon, which once gathered around 4,500 pairs, are beginning to disperse, as some of them have been spotted in El Hondo and in the Santa Pola salt lakes.

In a few days, thousands of birds living in the wetlands will continue on their way to other Mediterranean areas that offer them more food and tranquillity than Torrevieja. In addition, some inexperienced ones will arrive at unsuspected places for flamingos, in greater numbers than other years.

The reproductive cycle comes to an end and the young flamingos begin the nomadic life that characterises the species, which, unlike most migratory birds, does not present a pattern of movements linked to the seasons of the year, living in a continuous wandering among the wetlands of the western Mediterranean.

The AHSA is concerned that the recent project presented by the Generalitat Valenciana to carry out infrastructures to divert most of the rainwater from the Torrevieja lagoon catchment basin will adversely affect the birds.

The periodic contributions of rainwater during episodes of intense rainfall dilute the salinity of the lagoon water and allow the artemia salina cysts (eggs) to hatch, providing a huge amount of food for flamingos, black-necked grebes, seagulls billfishes, white jars and other species linked to saline aquatic environments, for which this small crustacean serves as the main source of food. Without these contributions of rainwater, the salinity will remain too high to allow brine shrimp to hatch and will affect the presence of these species in the Torrevieja lagoon.