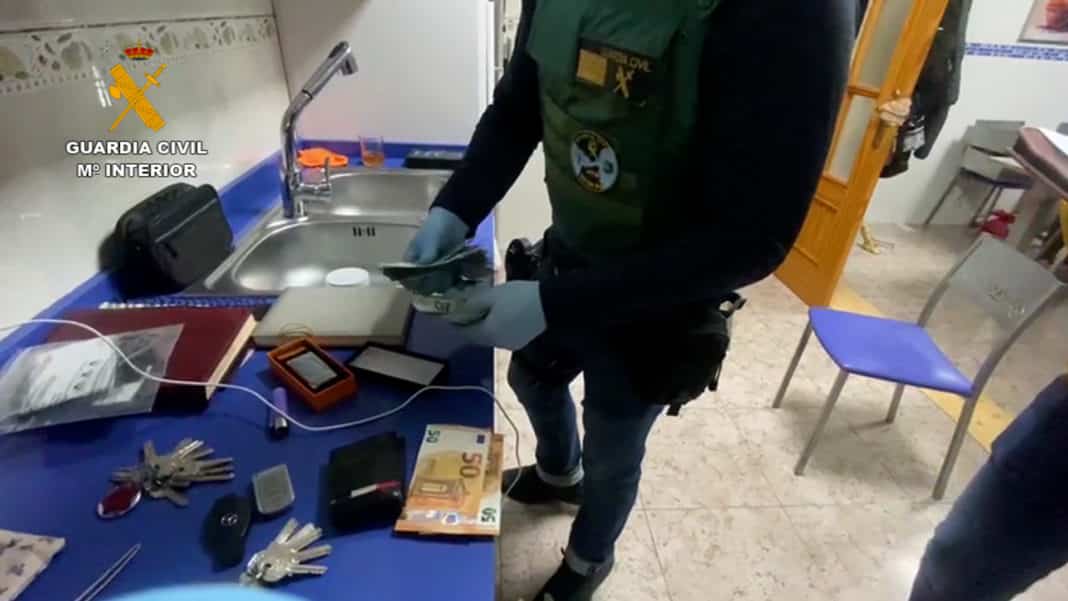 26 people have been arrested, including in the Alicante towns of Torrevieja, Guardamar de Segura and Orihuela; and in San Javier (Murcia Region), as well as in the Almeria towns of Macael, Olula del Río, Níjar, Carboneras, Mojácar and Pulpí, in an operation dedicated to dismantling a criminal network dedicated to introducing hashish into Spain by sea, from North Africa.

The Guardia Civil, within the framework of the “Uleyla and Mar 21” operations, began investigating the network a year ago, when officers became aware of a possible launching of a high-speed boat, one of those commonly used by drug gangs, from the North African coast bound for a port on the coast of Alicante.

The first investigations put the agents on the trail of two employees of an Alicante marina, who, as has been verified, offered security to the organisation by taking advantage of their working hours.

During the launching of a drug boat in a marina in Guardamar del Segura (Alicante), the alleged perpetrators who were being watched fled from the scene in a vehicle at full speed, destroying the fencing of the facilities and damaging several vehicles that had stationed in the area.

In June 2021, investigators intercepted a trailer equipped with a double bottom, which was accessed through a sophisticated hydraulic opening system.

Days later, it was possible to thwart a new launching of another narcolancha (drugs boat), which the gang intended to carry out on the beach of El Pinet, in the Alicante town of La Marina, using an agricultural tractor, a light trailer and a boom truck. On this occasion, the transport of the boat was intercepted by the agents a few meters from the launching point, intervening a boat 12 metres long and with 700 horsepower. The Guardia Civil then arrested the driver of the transport and his companion.

At one point in the investigation, the agents prevented the group from carrying out two caches on the beaches of the Almería coast, in which a total of 47 bales of hashish were seized. One of them in the town of San Juan de los Terreros, using a high-speed boat, and the other in Mojácar, using a recreational boat.

After several months of investigations, the last phase of exploitation of these two operations has been carried out.

9 searches have been carried out in the province of Almería. 30,000 euro seized, 2 vehicles, 2 boats, 3 short firearms with numerous ammunition, 3 Taser-type electric pistols, an AK assault rifle with ammunition, 2 propellers for high-power nautical engines, and numerous navigation and communication devices by satellite. In addition, 1,500 kilograms of hashish, several doses of cocaine, and the necessary elements for the preparation and retail sale of the drug have been seized.

The assault rifle was intervened in one of the actions carried out, when two of the detainees tried to flee in an SUV, hitting one of the official vehicles that was overturned in the middle of Sopalmo Beach in Almería, as well as the recreational boat that they used in said cache, which they did not hesitate to run aground on the shore.

Parallel to the investigation for drug trafficking and criminal organisation, an asset investigation was carried out, obtaining a multitude of indications that link the organisation with the crime of money laundering.

Last May 2022, both operations were considered completed, with the control of 236 bank accounts. The band created a business network, acquiring solvent companies. Later, under the name of these companies, they acquired goods for use in criminal activity. The money obtained from the illicit activity was exported to tax havens through million-dollar promissory notes, using figureheads or even their own relatives. Subsequently, the money was laundered by investing in Foundations in South America, thus hindering the economic trail.

The operation has been carried out by the Team against Organized Crime and Anti-Drugs (EDOA) of Alicante and the Coordination Body against Drug Trafficking of Andalusia (OCON SUR), which have had the support of the Rapid Action Group (GAR), the Centre Regional Analysis and Intelligence against Drug Trafficking (CRAIN) and the Cynological Service of the Almería Guardia Civil Command.