BY PAUL DURRANT – The OWS darts league concluded this week, at the Los Cucalos restaurant La Zenia, with an enthusiastic audience of nearly 200 darters and partners.  A 3 course meal was followed by the mandatory end of season prize giving formalities. 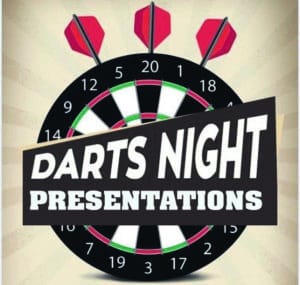 Preceding the auction of a Phil Taylor original artwork by Chelsea Campbell, was a raffle with wide ranging gifts on offer, electrical goods, obligatory alcohol, some amazing cakes, courtesy of Cheryl McGlynn and finally a Summer hamper devised by Simone de Lacy.

Jane Wills used gentle persuasion to rid guests of their raffle cash, partner Bob Smith conducting the auction for the signed Taylor painting. A good job he did too, raising a 3 figure sum, soon to be winging its way to benefactors, the Royal British Legion.

lronically it was Bob’s own team, Danny’s Bar, claiming the final bid, crafty Mr Smith. Music from Sunshine radio D.J. Alfie “G”, continued the evening until the early hours. At the time of writing, and from the numerous favourable messages l have received, it’s fair to say the evening was a great success.

The league will resume in September after an A.G.M. in August, details will be published / forwarded to existing members, teams wishing to compete next season should forward details to simonedelacy@hotmail.co.uk or 600 980 744, prior to August.

Guide to virtual offices and their services

Being the large center of business that it is,...