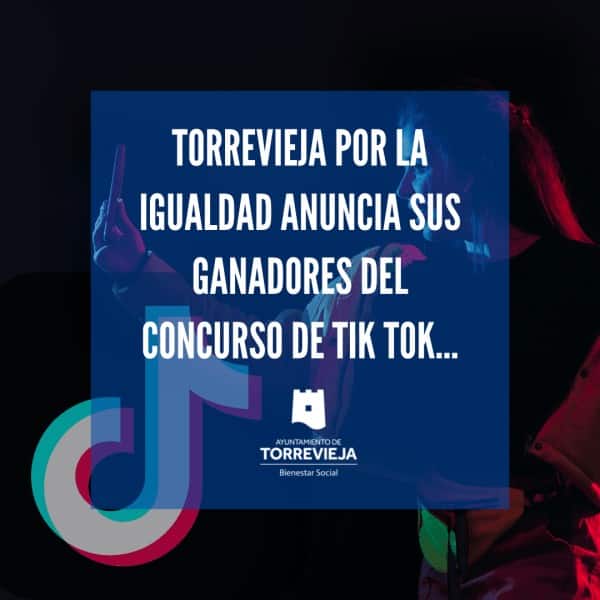 The contest invited citizens to upload videos for equality and against gender violence to TikTok around March 8, International Women’s Day.

The initiative is part of the national project ” Rolling for equality “, which unites more than 30 municipalities in the country and where the winning piece will compete for the national prizes of 1,000, 500, 400, 300 and 200 euro.

“Torrevieja for equality” has revealed its winning works. The first prize, endowed with 200 euro, went to Elisa Cánovas Lagueruela for a video entitled “Matriarcado, sensibilidad e igualdad” in which she cites the definition of matriarchy formulated by the philosopher and researcher Heide Göttner-Abendroth, accompanied by the phrase “With conscience and love there is no violence, there is no machismo” and a rap sung by McCrack calling for equality between women and men.

Elisa and her creation will represent this municipality of Alicante in the national awards of the initiative “Rolling for equality”, where they will choose to get one of the five that are made up, with prizes of 1,000, 500, 400, 300 and 200 euro respectively. These national awards, to which the winners of the 32 local contests that make up this edition will aspire, will be announced on March 31.

For its part, the second prize of “Torrevieja for equality”, endowed with 100 euro, has been won by Biviana Gisell Rosas Ardila for a video in which she represents her own story after suffering a sexual assault in 2018 wondering “¿Por qué a mí? ¿Fue mi culpa?” and replying “It wasn’t my fault. I was only 13 years old” to end with the motto “Not one more”.

The TikTok contest “Torrevieja for equality” has been held between February 22 and March 18 (both inclusive) with the hashtag #Torreviejaporlaigualdad and the national label #rodandoporlaigualdad.

32 municipalities from all over Spain have joined this second edition of the national initiative “Rolling for equality” to fight together for gender equality. The objective of the call is to stimulate the creative capacity of citizens and promote both reflection and awareness of gender equality. The TikTok platform was chosen for its high penetration in the youngest strata of society and for the ease of audiovisual creation it provides.

Web of “Rolling for equality”