Following on from the peace rally in Torrevieja last weekend there was not one, but two such events held on Saturday and Sunday in Orihuela Costa.

On Saturday people stood in solidarity against Russia’s invasion of Ukraine and in support of the people of that embattled country.

The rally got underway at noon. Organisers said that It involved over 20 different groups and Associations, including the International Association for the Awakening of Orihuela Costa, AIDOC, the N332 the Charity Association of the Guardia Civil, CLARO, Help at Home CB and Caritas. Disappointingly, however, it only drew about 80 participants.

Speakers addressed the crowd in Russian, Ukrainian, Polish and Spanish but all had a similar message in support of the people of Ukraine “against this breach of international and humanitarian law.”

While some spoke of their personal situations, and those of friends and family who were directly caught up in the conflict, Francisco Morales of the N332 and Luis Manuel Carcedo from Caritas, both gave details of charitable drop off points for donations of goods, as well as bank accounts, managed by Caritas and Cruz Roja, into which financial donations can be made. 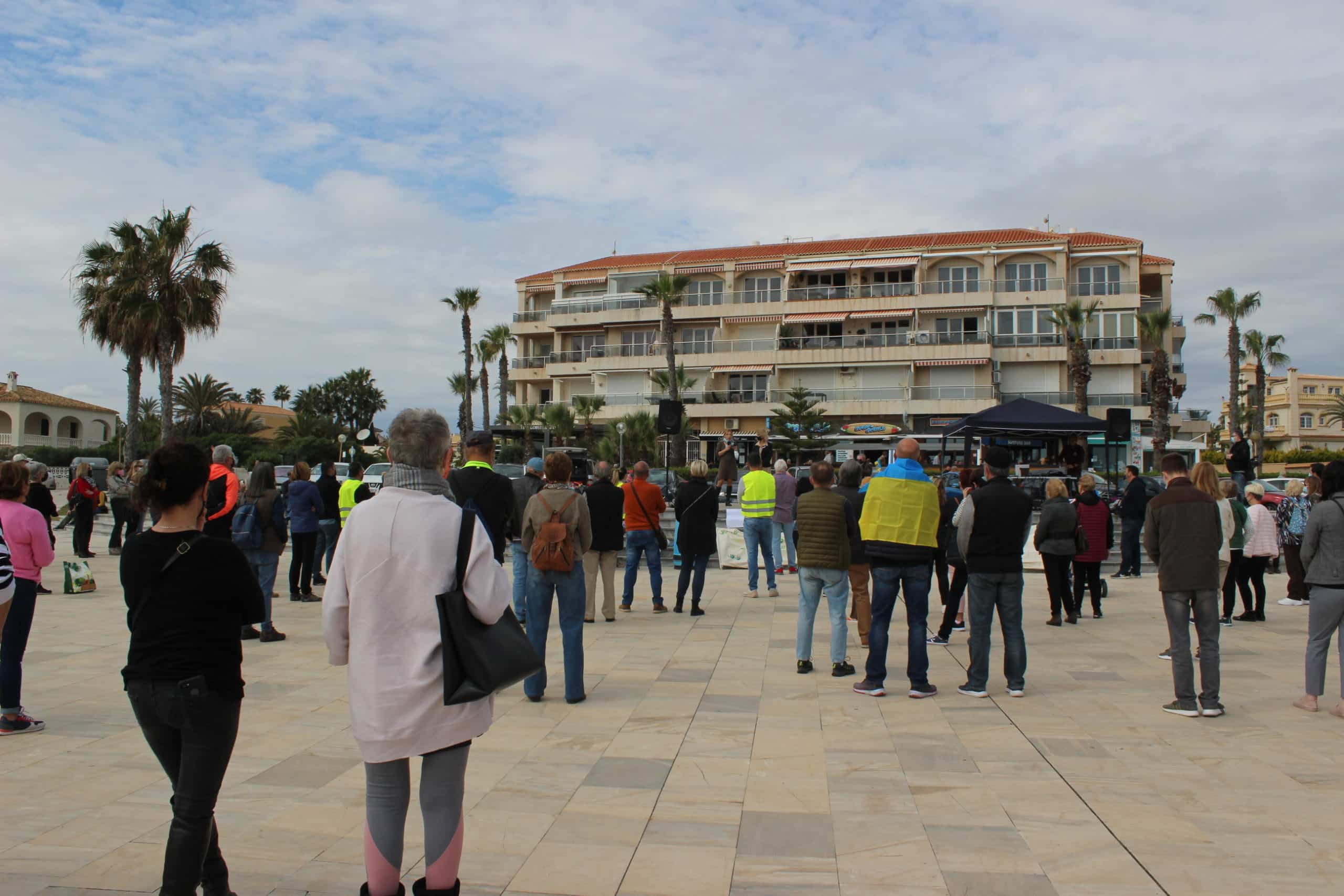 Morales confirmed that Castillo trans, a local transport company, have offered to transport any donated goods to the Ukraine for free, although on the day, donations were also disappointing, numbering fewer than a dozen bags.

Saturday’s rally ended when a dozen doves were released by Orihuela children, bearing a symbolic message of peace and hope for the people of Ukraine.

On Sunday, the second weekend rally was preceded by a live broadcast from Sunshine Radio, presented by Stevie Spit BEM, although because of the heavy rain the show was moved indoors to the adjacent ‘Surfers’ Bar. Nevertheless, despite the very wet conditions, about 150 people gathered at what turned out to be a frequently emotional rally, during which several Ukrainian speakers told of the damage being done to their country. 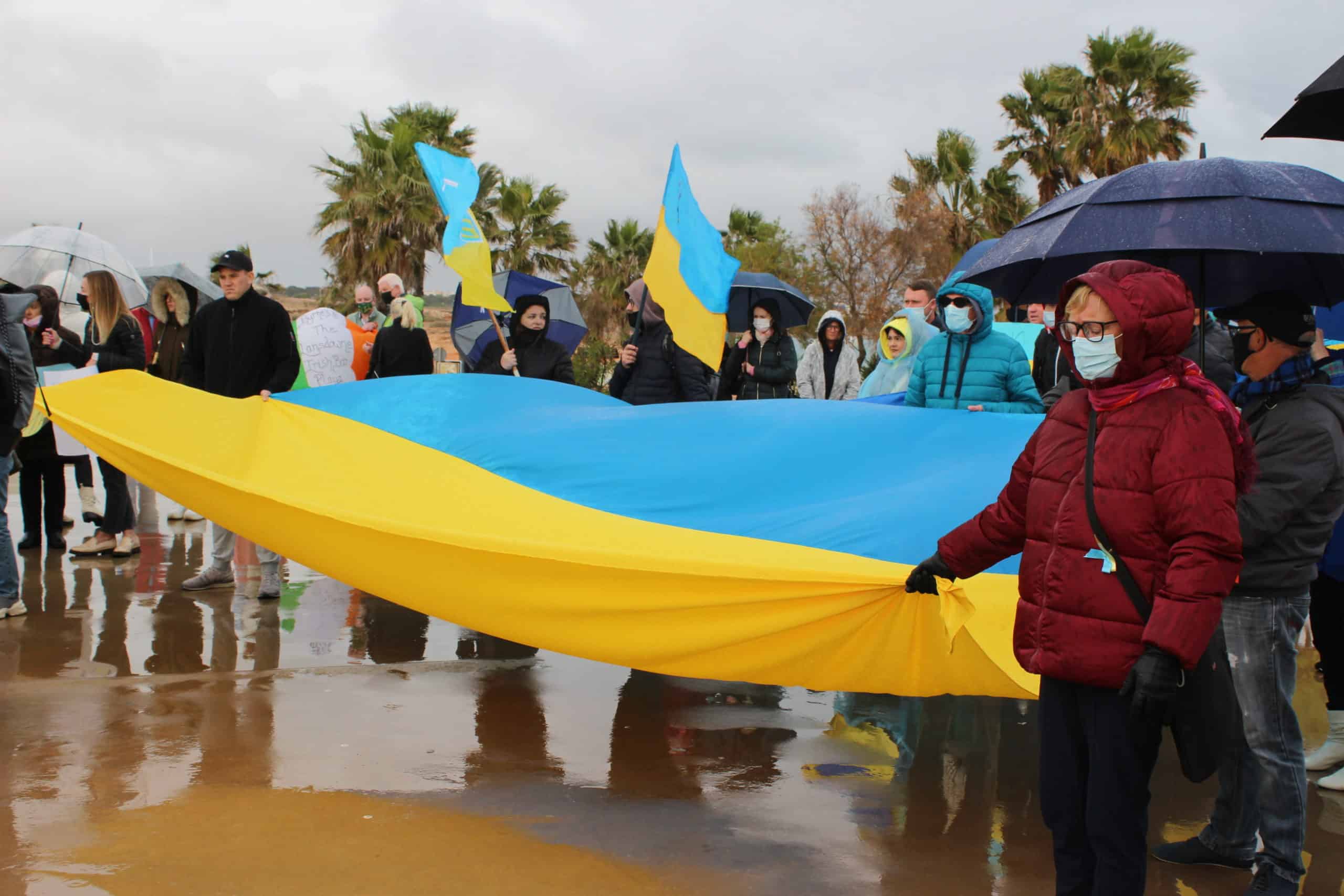 The event began with the singing of the Ukraine National Anthem, following which a number of short speeches were made by organisers.

The attendees were largely Ukrainian, with members of the Association from Torrevieja joining their brothers and sisters, including some Russians, in Orihuela Costa.

There were far more expats in attendance and also, unlike Saturday, there were a large number of banners and flags on display, representing Wales, Scotland and Ireland as well as a number of other European nations. 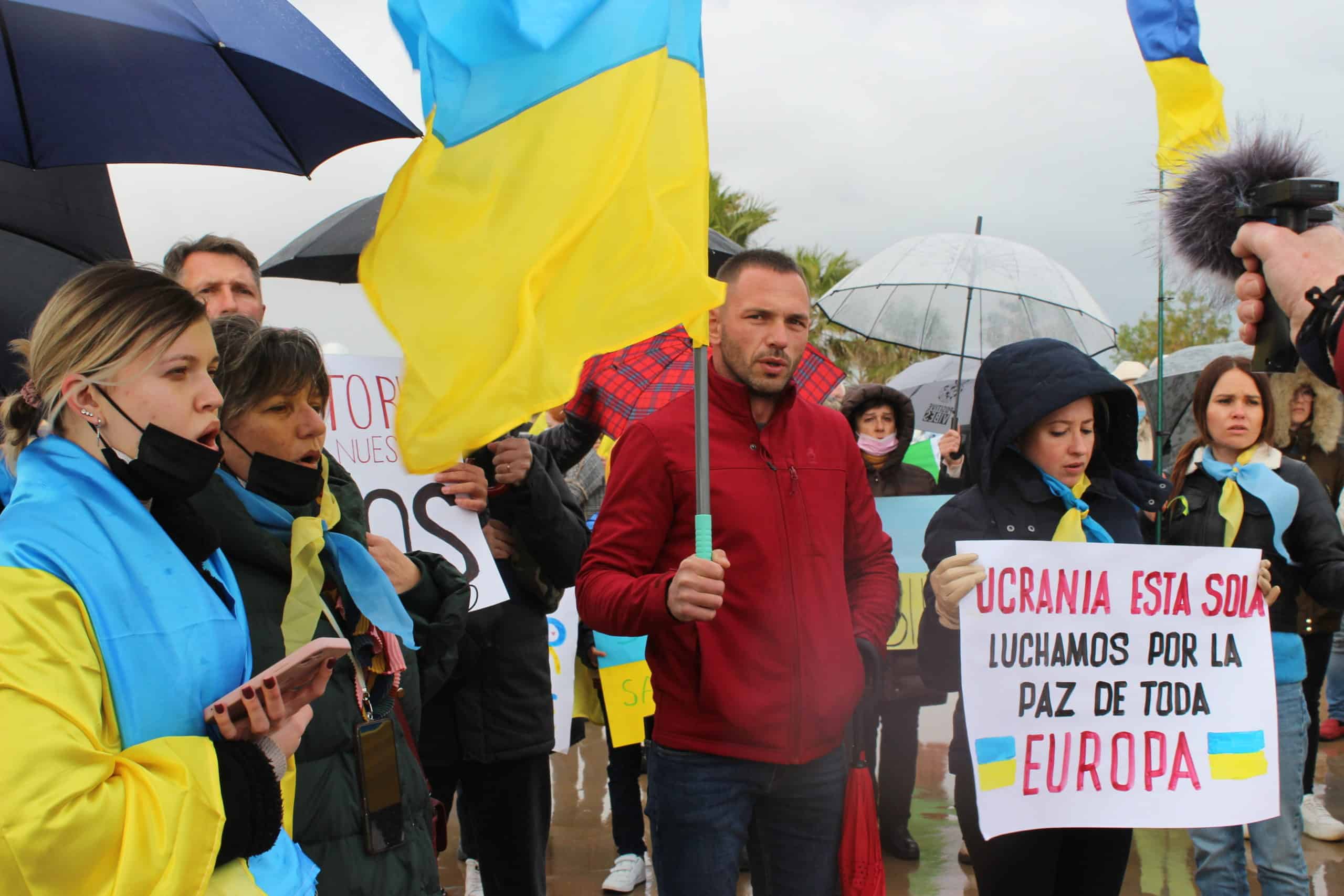 The emotion they brought ensured that it was going to be a far more passionate rally than that of the previous day. And such was the case, especially when one young Ukraine lady, having arrived from Kyiv earlier in the afternoon, spoke between her tears of the gunfire, the bombing and the destruction she had witnessed, as she fled the city with her sister and daughter, leaving her husband behind to fight.

“It’s a difficult situation because the madman has nuclear weapons. I think he has cut himself off from the entire world, totally,” she said.

Organiser, Román Jiménez, thanked all those present for their support. “The people of Ukraine are the real heroes of Europe today. They are defending freedom and trying to stop Putin starting the third world war” he said.

And while Ukraine resists on the front line we can help also by providing donations of food and supplies to the most vulnerable people inside Ukraine and in neighbouring countries, especially those on the move in search of safety.

And if you cant find a drop off point locally you can either contact us by WhatsApp +34 604 38 81 83 or you can take your donations to the Parroquia Cristo Resucitado – Centro Ecuménico or the offices of IBEX INSURANCE in La Zenia.

“Ukraine will rise again. It has done it in the past, it will do so in the future.”