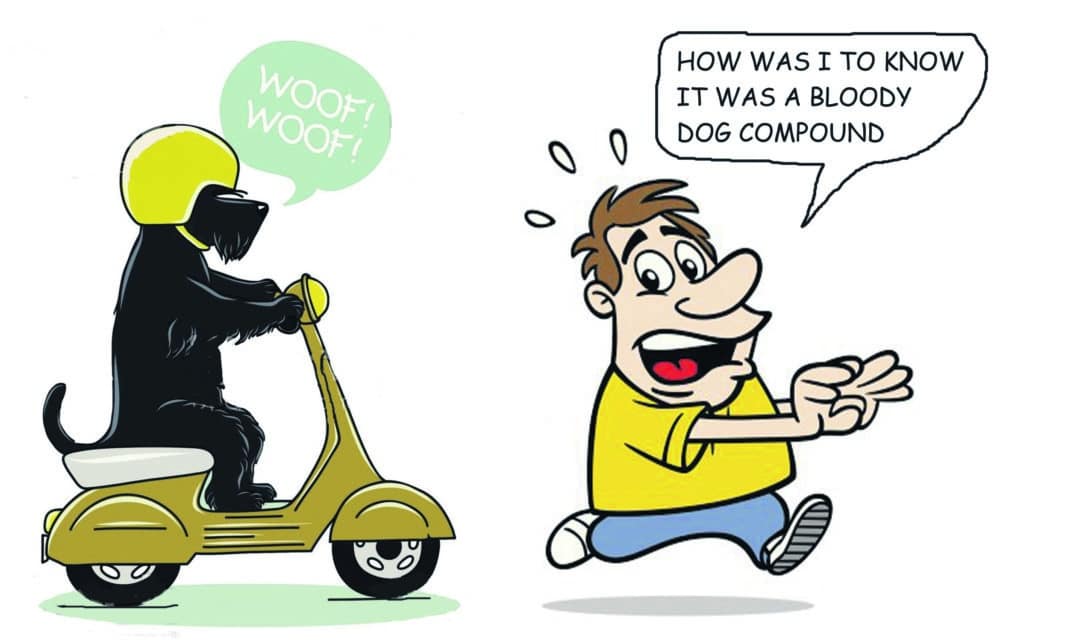 The huge mangy brute went mad as soon as it saw me, and a rabid race raged between us. But this time the beast wasn’t chained up – and on his home turf the odds of meanly mauling me were very much in this favour.

My annual RAF reunion takes place in May every year. It entails my flying to the UK for a long weekend, usually staying with my old mate from all those great years many moons ago. We always have a terrific time rolling back the years from the late Sixties and early Seventies. But last year my wife Annie couldn’t accompany me and she needed the car while I was away. I know, I thought, I´ll go to the airport on my scooter. I could leave it in the car parking pound for the weekend where my mate works. Great – what could go wrong?

It was a Thursday to Monday job. I left home mid-afternoon and arrived on my beloved Vespa at the airport security pound which I had used a number of times before with the car. Pulling off the motorway there is a large security gate in a wall about seven feet high and a speakerphone button which I pressed. The gate immediately began to open and I continued towards the reception building. Since owning a scooter for about ten years in my later life I have noticed there are some dogs which just cannot tolerate the particular phut-phut noise a typical Vespa makes. I spotted a large wooden kennel between the reception building and the parking area – and suddenly its occupant emerged in an apparently foul mood.

Anyone remember the big horrible dog ´Spike´ in the Tom and Jerry cartoons? Huge head, big teeth too big for its mouth, slavering with anticipation of something tasty coming its way? At the steps of the reception building I froze as the ´dog´ came at me. Before anything could happen the animal nearly choked as the ten foot of chain was jerked to its full strain. Phew! There was no-one about so I stopped, took off my helmet and walked into the office. My mate wasn’t there so I introduced myself: the lads there said no problem, just leave my helmet with them and they would wheel my scooter round the back for me where it would be safe. I thanked them, listened to the strange instructions to get to the airport building and I was let out of the compound.

I was suddenly and dramatically introduced to the world of asylum-seekers. Jumping over a fence as instructed I crossed two double lanes of motorway traffic, negotiating the central crash barrier en route. Then scrambling up a six foot bank, I stumbled along a precarious footpath of big weeds to a six foot wall I needed to descend. Some kind person had propped up some wooden pallets to assist the drop down to the dingy corner basement of the lower car park of the airport. After a good dust down I was ready for the bright lights of Alicante Airport and departure.

A great weekend ensued, as ever I met up with some ´old´ mates including a couple of newbies which we manage to find every year. So when my great friend dropped me off at Gatwick Airport mid -afternoon on Monday I was looking forward to coming home with new memories to relate to anyone who would listen. The reverse journey went as planned, except for having to somehow climb up the pallets – I´m not as young as I used to be.

The compound gate was shut so I pressed the button and it started to open. It was getting dark by this time and I went straight into the office and met a different set of lads. They gave me my helmet, took me through a back door and showed me where my scooter was. I thanked them, put my helmet on, and slung my weekend rucksack on my back. The only way out was round the far side of the office building and then to the gate, an area I hadn’t been before. I started up my scooter and drove around to the front.

In the euphoria of my trip I had completely forgotten about Spike – but he hadn’t forgotten me. I suddenly realised I was dangerously near his fortress and tried to take a wide berth from him to aim for the big wide gate. He was having none of that and the Wacky Races took on a new meaning. As I wildly accelerated I thought I might make it but the big beastly b*****d caught me just before the gate – and sank his teeth into my leg. I swore savagely and kicked him away, and bursting through the gate left Spike behind. I vaguely heard one of the  lads shouting out ´Sorry mate!´ as I juddered off into the night.

Everything was OK when I got home and I recounted the good points of my weekend to my wife. But like most wives Annie has that sixth sense when she’s knows there’s something wrong – and it didn’t take long before I told her what had happened. Predictably she went mad and demanded I go to hospital before gangrene or whatever took over. In the end we settled for our surgery the next morning which then involved a trip to Guardamar accident centre. Here they discovered from my notes that I had already had jabs the year before to prevent such infections. They cleaned me up and all was well. You could actually see the big teeth marks where Spike had sank his teeth in, so it wasn’t actually very trivial.

The following week I caught up with my mate who works there and I told him the story, of which he was unaware. All he said was ´Oh that’s nothing, he attacks the postman every week…´ 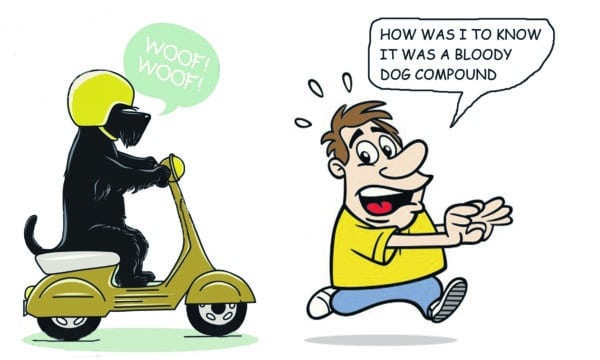 Something To Shout About