The LeaderPutting YOU at the Heart of the Community
Sign in / Join
Subscribe
Home Columnists Bernie Comaskey You Can’t Be Serious – ‘We’ll meet in Purgatory! …’ 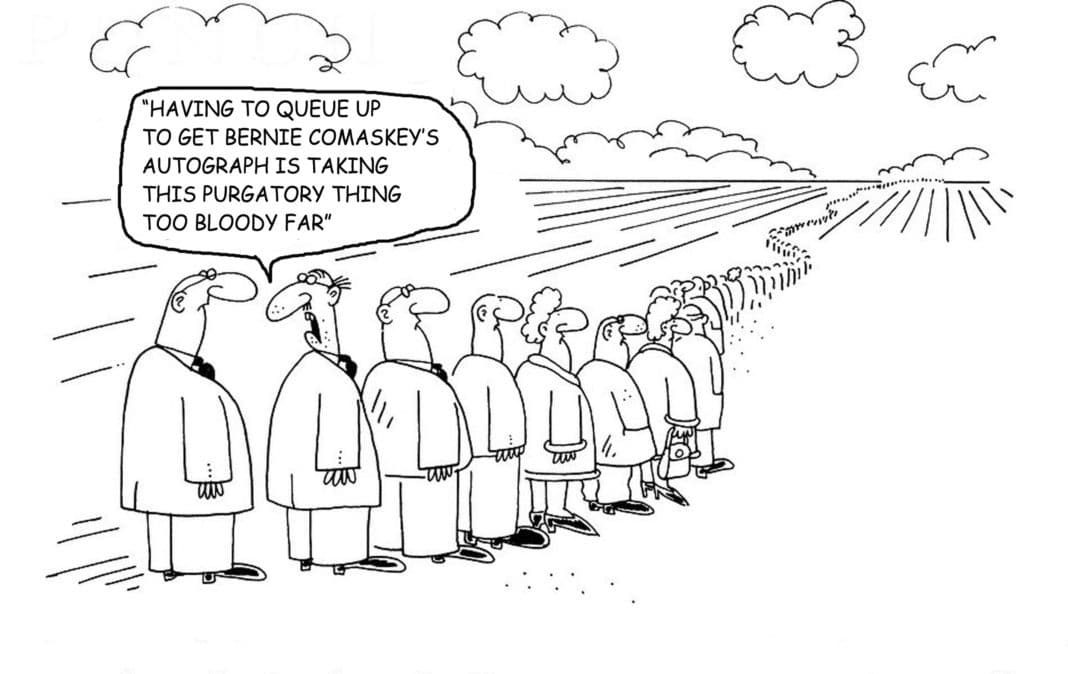 Let’s face it folks, there is no way that I am going straight to heaven. On the other hand – and in my own defence, I don’t believe that I have ever done anything bad enough to warrant the ultimate penal sentence of spending eternity in Hell’s fire?

Purgatory … now there’s ‘yer mould’ for the likes of me. I had more or less forgotten all about Purgatory until a priest brought it up recently during mass. In fact, at the back of my mind, I might even have thought that the Church had done away with Purgatory – same as it stripped my friend, Christopher, of his sainthood. Anyway, turns out it was Limbo that got the chop.

‘What is Purgatory?’ was a question in our school catechism. ‘Purgatory is a place or state of punishment, where souls suffer for a time before entering into the Kingdom of Heaven’, was the answer that any kid in Johnstown could rhyme off without a moment’s hesitation. So, there you have it – and I am so thoroughly pleased that this vitally important stop-over is still in existence. When you think about it, Purgatory is an essential element in the field of fair play and justice.

It will come as a shock to a great many readers of YCBS that this scribe is no card-carrying saint. (Give that nice lady over there in the corner, a whiff of smelling salts, please.) Like I said, I don’t deserve to go straight to heaven: equally, in my biased opinion, I should not be confined to languish forever down there in you-know-where. I put my hands up; am prepared and willing to ‘atone for my sins’, do my time and come out at the other end a better man. (Stop it, Lads.)

If you ‘do the crime –you do the time’, is more than fair, don’t you think? I picture God presiding from a bench-like throne. Angel Gabriel will probably act as chief prosecutor, with the gatekeeper, Peter, ushering people in and out. Wouldn’t it be great if they allow a ‘plea bargaining’ system, like they do in courts in America? I’m all for that when it comes to my turn. You agree to plead guilty to a lesser charge in exchange for a more lenient sentence. I expect that my guardian angel will speak up on my behalf; pleading with the Lord that I was always good whenever I thought of it.

Whatever the length of my sentence, I shall be mightily relieved in comparison to that possible alternative we spoke about. Indeed, I believe that Purgatory will be rather an interesting spot, because you never know who you might meet there!

I guarantee you I shall know more people in this ‘place or state of punishment’, than anywhere else in the afterlife. Can you imagine all the conversations going on around us?

All the Lads will be there, apart from one poor scrut, who was always full of hatred for his fellow-man. His elevator doesn’t stop at ‘P’ on the way down.

‘Oh my God, Tess … and not taking his name in vain; but I see that nice girl over there who used to collect money for the one-eyed cats and lame dogs: Wouldn’t you be surprised that she didn’t go straight to heaven?’ ‘Oh, I don’t know, Vera, that wan had another side that no one ever noticed, but ‘I’m more surprised to see yer wan that stole the chicken from the supermarket after the husband left herself and the children – and we couldn’t speak to her after the court case and we told our children she was going to hell?’ ‘Just goes to show you, we should have left all that judging for today’s tribunal!’

Meanwhile back on Earth, the old people would often make the comment, ‘we’ll meet in heaven’ when they bumped into each other more frequently than usual. This column believes it would be nearer the truth for some of us to change that to ‘we’ll meet in Purgatory?’ I was explaining where my bar is set to one of the Lads and all he could think of to say was; ‘Doesn’t that bate the divil!’

There is no chance of an AA Roadwatch warning of traffic-jams on the road to heaven. 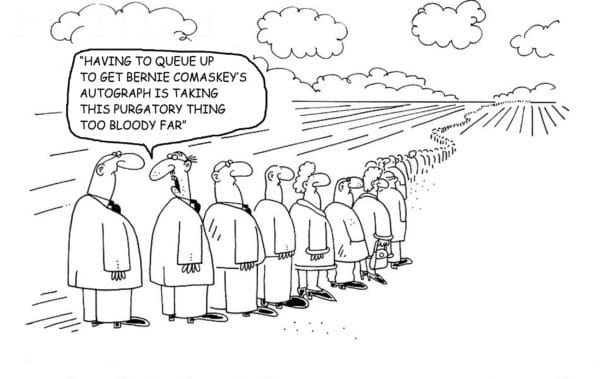