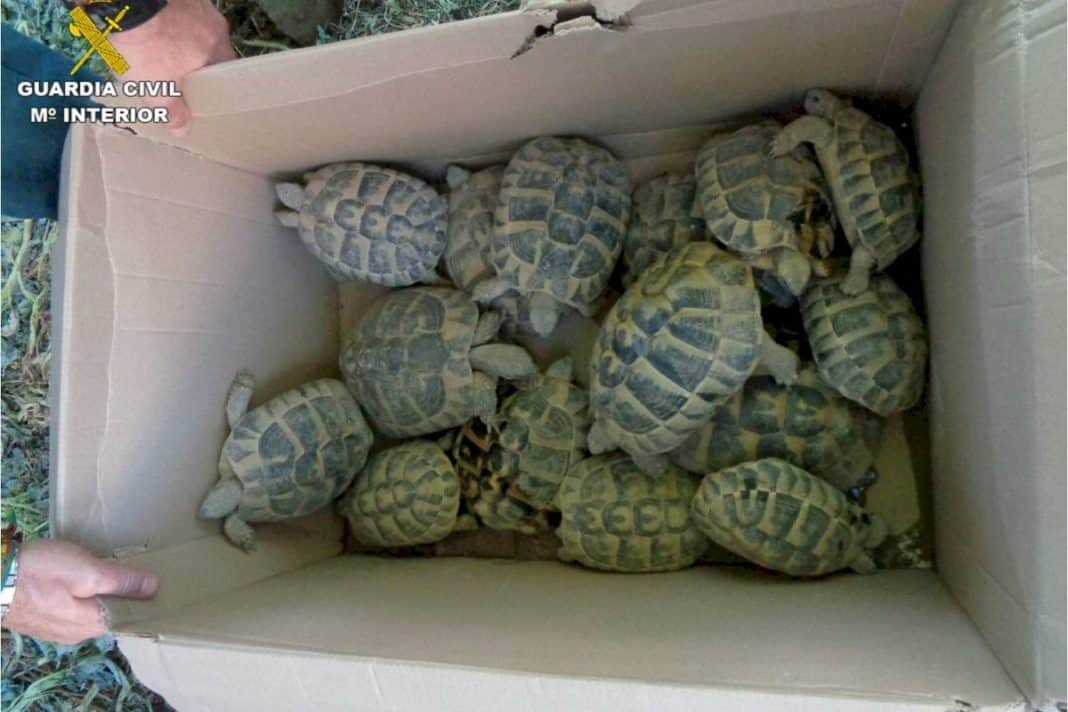 Officers from the Alicante Environmental branch of the Guardia Civil, SEPRONA, closed an illegal Mediterranean tortoise (Testudo hermanni) hatchery located on a rural estate in Elche.

Carrying out an ordinary inspection in a country house in Partida Algoda de Elche, the Nature Protection Service (SEPRONA) found a fenced area in which there were several dozen Mediterranean tortoises (Testudo hermanni). Upon entering the interior of the wooden shed that was in the enclosed space, they verified that the facilities were set up as a breeding ground for the species.

The person in charge was required by the agents to provide the necessary documentation for the legal possession, breeding and trade of this type of animal, but he could not prove it. Among other obligations, he has to prove the lawful origin and acquisition of the animals, as well as the registration of the farm, in case of obtaining the pertinent authorisation, for the possession of protected wild species as pets.

The Mediterranean tortoise (Testudo hermanni) is a family of diurnal, herbivorous land reptiles that can reach ages comparable to that of humans. Its popularity as a pet, and therefore the proliferation of illegal trade in these specimens, is one of the main threats to the long-term survival of the species. It is a species of protected wildlife, included in Appendix II of the Convention on International Trade in Endangered Species of Wild Fauna and Flora (CITES).

Seprona intervened 27 specimens of Mediterranean turtle and closed the illegal hatchery. The owner has been denounced as the alleged perpetrator of an infraction of the regulations that regulate the possession, trade and captive breeding of wild fauna species of this type: Organic Law 12/1995 on the Repression of Smuggling and Law 42/2007 on Natural Heritage and Biodiversity, in accordance with Royal Decree 986/2021, which establishes application measures of the CITES Convention, regarding the protection of wild fauna and flora species through the control of their trade.

The person responsible faces, according to article 334 of the Criminal Code, a crime for illegal trafficking with protected species of wildlife, punishable by prison sentences of six months to two years, and special disqualification for profession or trade, as well as the exercise of hunting or fishing, from two to four years.

The intervened specimens have been deposited in facilities of the Ministry of Agriculture, Rural Development, Climate Emergency and Ecological Transition, at the disposal of the competent state authorities to resolve the file.