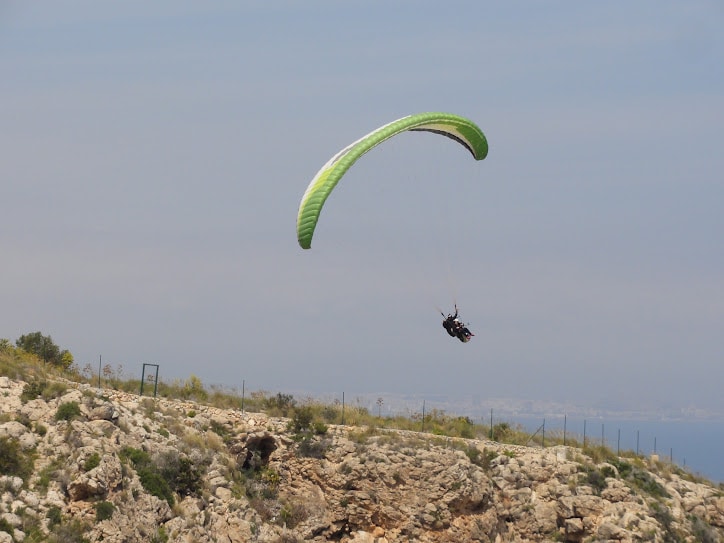 After almost 30 years of conflict and neighbourhood complaints between the residents of Gran Alacant and the paragliding clubs, due to the perceived problems the jumpers cause in the area, Santa Pola Council has announced that “it is determined to put an end to the situation”.

The Council explained it has been trying for 3 years to solve the problems between the paragliding association and the residents of the area, by drafting an agreement in which it was only requested that the association “regulate jumps by the association, civil liability insurance is required from the association, there are controllers and portable toilets are installed in the area. The association confirmed in the last meeting that these points were unaffordable”, confirms the councillor of Gran Alacant, Oscar Valenzuela.

Therefore, a letter has been sent to the residents of the area and to the paragliders making clear the position of the council in the absence of consensus with the association of paragliders.

To date, jumps were made in that area by paragliders. An activity that they explain “has become a problem due to the accidents it has caused since its inception and the repeated complaints of the residents of the area, due to the accesses to the area through privately owned housing estates, the use of the urbanisation and a long list of complaints, after residents installed surveillance cameras in the area to corroborate the facts”.

The Association of Paragliders, indicates the consistory, “has not wanted to accept any type of agreement in the numerous meetings that have been held. Therefore, the Santa Pola City Council has already raised both the political groups and the residents of the area, give a different use to the natural area”.

The Santa Pola City Council has clearly positioned itself in its commitment to promoting sport in the town. “Safe and regulated sport, that offers all the guarantees to those who practice it and to the residents of the area”, says the Councillor for Sports, Julio Baeza.