On the 12th of September San Miguel de Salinas resident Andrew J Daniels will be setting off on an epic cycle ride from his old home in Hastings in the south east of the UK to his current home in the south east of Spain. The journey of approximately 1,200 miles will be undertaken to raise money for Muscular Dystrophy UK and will fund vital research.

In 2002 Andrew fostered Matt, a twelve year old boy with Duchenne Muscular Dystrophy, a muscle wasting condition for which there is currently no cure. What followed were fourteen years of incredible joy and crushing pain until Matt’s death in 2016 aged 26.

Says Andrew, “Knowing Matt changed my life and brought out the best in me. Every morning he woke with an excitement about the coming day that I will be channelling during my cycle ride. For somebody with Muscular Dystrophy every day requires huge courage and determination, so that will inspire me when the going gets tough.”

After doing a sky dive in 2016, Andrew bought his first bike in thirty eight years to do a second challenge three years ago.

For the current challenge he will be riding a vintage cycle, and describes himself as a creaky old man on a creaky old bike. He hopes to cover an average of sixty miles every day.

You can follow his journey and donate via JustGiving at: Andrew J’s Miles for Matt 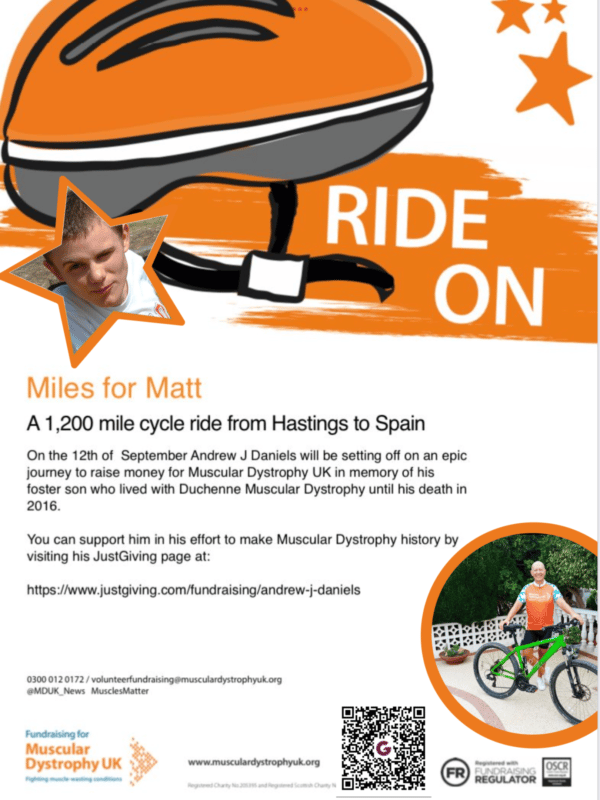