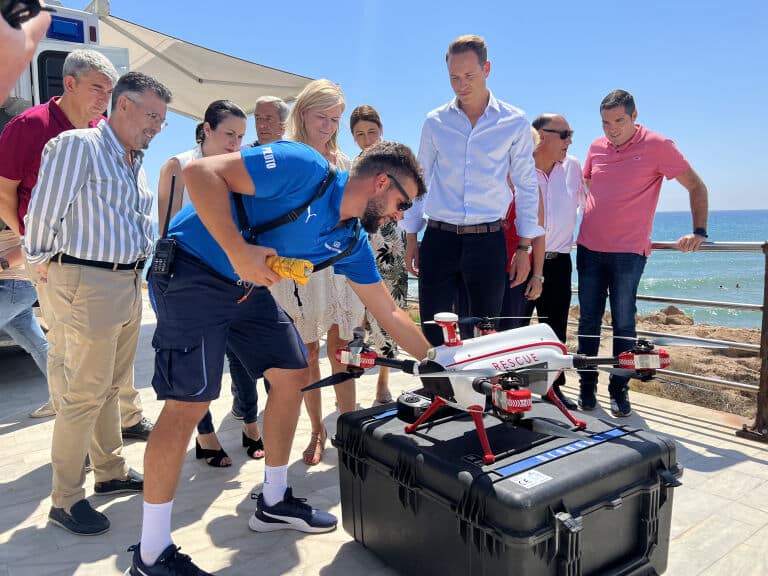 The Valencia region’s Minister of Justice, Interior and Public Administration, Gabriela Bravo, was on the Orihuela Costa on Friday, to present the maritime rescue device using drones which this year, after the pilot test last summer, is being extended to 20 municipalities in the Community, eight of them in the province of Alicante.

The company that provides the service carried out an example drill in Playa Flamenca to show how the device works, which is capable of starting up in just a few seconds, reaching a speed of 85 km/h, which gives a quick response to an emergency in the water.

Bravo has pointed out that it takes only 60 seconds for a person in distress in the water to drown, so this quick response can save lives. In fact, she pointed out that in the last summer campaign the drone managed to save six lives in cases in which the victim could not have been accessed through the usual channels due to the state of the sea or the orography of the terrain and acted in 99 emergencies.

During the demonstration in Playa Flamenca, where a drill was carried out that also included the presence of the rescue service concessionaire on the beaches of Orihuela, Ambumar, since the objective is for the service to support those contracted by each council to deal with emergencies on the coast. Thus, the lifeguard service was alerted that there was a person in the water with difficulty staying afloat.

Quickly, the pilot of the drone took off and headed to the point indicated by the walkie talkie. In just a few seconds, the drone located the swimmer and has been able to throw him a life preserver to keep him afloat, while the lifeguards arrived, seconds later, with the jet ski and a stretcher, with which he was towed to the sand in a few seconds, where the medical team was waiting to revive him, successfully. In this way, in just a few seconds, a life jacket was provided to the victim to keep him afloat and, in less than four minutes, he was out of the water and in resuscitation.

The service will be provided in 20 municipalities throughout the Community, explained Bravo, and although, as the mayor of Orihuela, Carolina Gracia, pointed out, “the best thing is not to have to use it”, she celebrated that the municipality has a gift already that there are many coves and rocky areas where access by land for rescue teams is complicated and, with the drone, a quick first assistance can be given to avoid drowning.