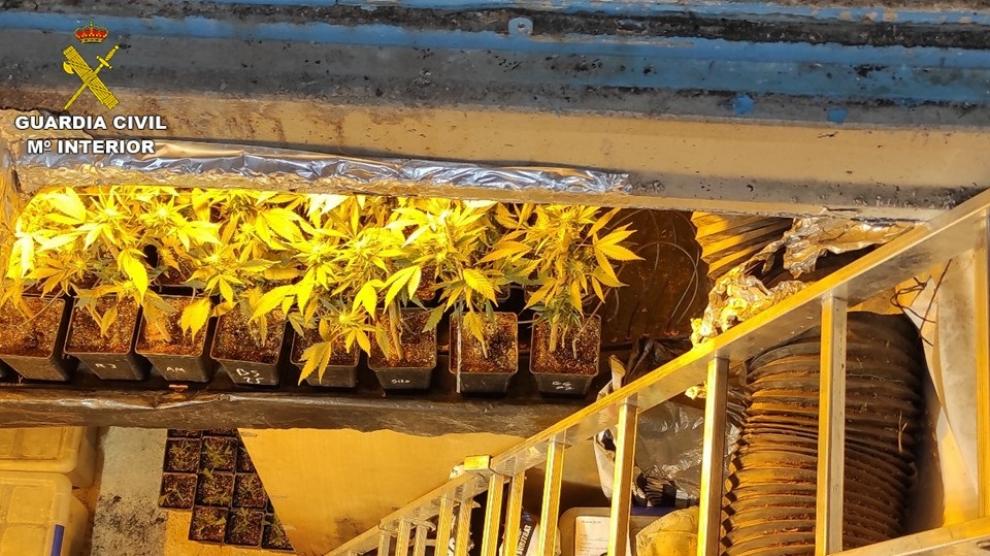 Officers from the Guardia Civil have discovered a marijuana plantation hidden in a bird farm in Aspe.

Officers received information about the location of the site, and that it was being used to grow marijuana for the purpose of trafficking, in May. They immediately started to investigate the claim.

To verify the information, the officers from Santa Pola launched operation ‘Bunma’. In a first phase, the agents approached the house where they believed drugs were being cultivated and trafficked.

Once at the location, they could see that it was a family home that had a nearby shed intended as a bird breeding ground. Likewise, they verified that the inhabitants of the house were members of the same family and that they didn’t have a police record.

Although the investigations did not give the expected results, the agents continued with the operation and added new means and methods of field work, such as fixed surveillance in the vicinity of the house.

After several days and nights, the device paid off. Thus, the agents saw how a man, a member of the family, never left the location and, every time he accessed the shed intended as a bird farm, it coincided with the fact that it gave off a strong smell of marijuana in the area.

The person under investigation did not have any lawful work activity, the investigators discovered. This man, a 45-year-old Spanish man, lived with his 75-year-old mother, also Spanish.

After noticing this detail, the agents investigated the date of construction of the annex, which had been built illegally by the brother and brother-in-law of the main suspect, both Spaniards aged 47 and 58.

It was possible to prove that since its construction, the electricity consumption of the house had increased considerably. This high consumption made the agents suspect that there was an important marijuana plantation inside the shed.

Once the necessary evidence was gathered that implicated the residents of the property in the crime of drug trafficking, on June 13, the operation was carried out, they proceeded to secure the area, and then to search the property, both of the house and its annexes.

Once the search began at the home, the main person under investigation resisted to slow down access to the agents, and thus try to destroy all the drugs through a crematorium or even down the toilet.

The obstruction of the alleged criminal did not last long, in a few minutes the agents entered the house, finding and intervening inside 3 kg of marijuana buds, as well as material for drying and weighing.

After accessing the house, the man was arrested on site for crimes against public health and for resistance and disobedience to an agent of the authority.

Subsequently, the search continued in the shed intended for raising birds, where the agents found a concrete cover, and below it, a ladder that went down to an underground bunker.

About 4 metres deep, was the bunker with an indoor cultivation of 756 plants and its laborious infrastructure. The equipment was made up of irrigation, cooling and ventilation systems, as well as halogen lamps and transformers. All this material, valued at around 15,000 euro, and the marijuana plants were seized by the agents.

Finally, both the mother, as well as the brother and brother-in-law of the detainee, were investigated for the crime against public health for growing marijuana.

The arrested person, along with the proceedings and the three investigated, has been placed at the disposal of the Court of Novelda (Alicante), which has decreed his provisional release with charges pending.