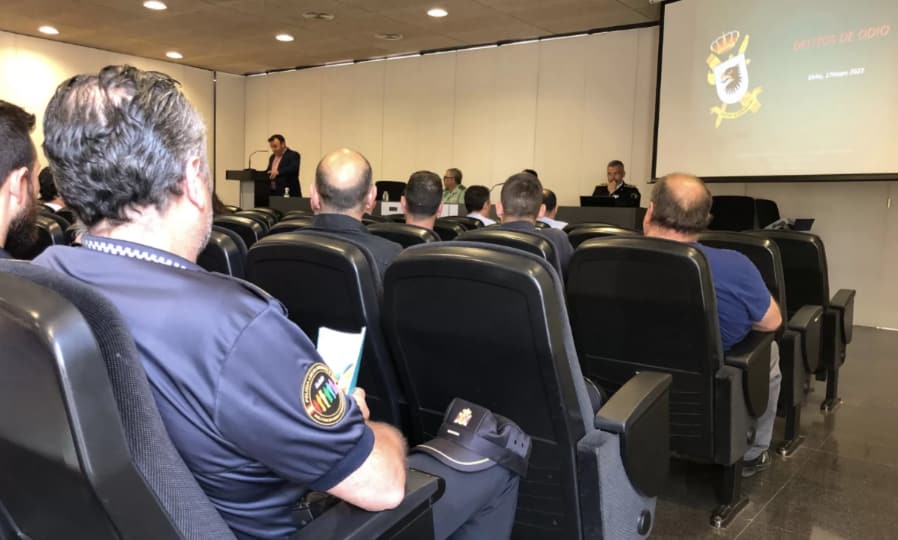 The most committed hate crimes at the national level are those related to racism and homophobia, as they are among the most visible groups; however, the authorities are also concerned about the significant rise in other hate crimes.

In order to combat any kind of intolerance from the law, the Government Subdelegation in Alicante chose Elche to develop its Hate Crimes Training Day, which took place at the Ciutat d’Elx Congress Centre, in an event that coincided with the International Day against LGTBIphobia.

Divided into two round tables and five eminently practical interventions, more than fifty agents and commanders of the state security forces and bodies, and local police from the municipalities with more than 20,000 inhabitants of the province, have gathered in the congress facilities of Porta de la Morera to exchange views resulting from daily work.

The training action has allowed the agents to raise and update their knowledge based on experiences in order to equip themselves with the tools to identify hate crimes and apply the available legislation against them; specifically, article 510 of the Penal Code and the generic aggravating circumstance typified in article 22.4 of the Penal Code applicable to any other punishable act.

The Councillor for Citizen Security of the Elche City Council, Ramón Abad, opened the Conference accompanied by other dignitaries from both the town hall and security forces.

“Hate crimes are the tool of the weak to destroy plurality and diversity, turn freedom into fear and fracture social cohesion and coexistence,” Abad said. “The perpetrators of these crimes base their hatred towards characteristics of the human being collected both in constitutional norms and in international treaties on the protection of Human Rights, which means that they must be handled as attacks on society and humanity as a whole”, the municipal official continued. “Hate crimes are, ultimately, an attack on the dignity of the people who suffer them, as well as their denial as an individual,” he added.

Abad, who recalled that the Elche Local Police fight against hate crimes with the Vulnerable Group Management and Attention Unit in collaboration with other forces, and that in the last quarter of the year the specific team to combat them will start up, which It will foreseeably be made up of an officer and up to three agents, he has expressed. The councillor has said that conferences such as the one organised by the Government Sub-delegation in Alicante in the town, showing his gratitude to Araceli Poblador for the courtesy of “choosing Elche for this pilot Conference”, are important to “put these crimes on the agenda and police strategies to prevent them”, being key to this the work of managing the diversity of municipalities and entities such as the Consistory and the Local Police of Elche.

In addition to the regulations in force, initiatives were discussed at the conference that have made it possible to establish alliances between police forces and groups that have historically been discriminated against in order to increase effectiveness against hate crimes. Like the international project of the European Commission Against Racism, Xenophobia and Hate Speech (CLARA).

Lieutenant Baeza from the Guardia Civil exposed practical cases on hate crimes against the poor, foreigners and the disabled. Sofía Rey from the National Police did the same on homophobia and crimes against transgender people. The press officer of the Valencian Observatory against LGTBphobia, Fran Rebollero, has focused on the work of the entity as an instrument of a social nature and support for victims of discriminatory attacks. And the prosecutor for Hate Crimes in the Elche area, Diego Pérez, has focused on those behaviours in this regard that clearly violate criminal and administrative regulations.

Pérez has stressed that the work of the Prosecutor’s Office is to guarantee the framework for existence in a “plural and prejudice-free society” by prosecuting hate crimes committed by “those who do not allow other people because of their skin colour, because of their place of birth or because of their sexual orientation, can live with the same freedom as the rest”, he stated. The prosecutor has recalled that there is a certain growth in hate speech on the Internet and in crimes against trans people, “although it is not a substantial increase in relation to other hate crimes,” he said.

Likewise, the Conference has urged to continue working with minors and young people, as education is the best weapon against discriminatory attitudes and behaviour towards those who are different. Finally, Abad recalled that the II Action Plan to Fight Hate Crimes (2022-2024) of the Ministry of the Interior, recently presented, reinforces the leading role of the police forces against incidents and crimes in this area.