With honours shared in the first half and Milos coming out out top in the scoring department, this match was expected to be a lot closer. Not so as the visitors surprisingly reeled off all six singles, with skipper and occasional player Simon Williams taking the 7th match winning leg along with his deserved MOTM award.

Gap sealed the league championship with this emphatic victory over the Lads. This weeks last league match against Flyers determining 2nd place. A D4 from Phil Husband was Lads only leg in the match, accompanied by 126,117,117, it was however Dario Sierra earning MOTM with consistent scoring.

C.C.’s couldn’t have had a more difficult end of season finale than firstly El Cap and next week The Gap to finish. They got over the 1st hurdle in style, a home victory, fair to say won in the 1st half by taking 4 of the 6 legs available, then sharing the singles. Matt Smith was pivotal before the break, finishing a D19, a 52 out and D8 ina 17 dart 601 thriller with Dougie Adkins both sharing 140’s. Suso Madrid a 49 out with the 4th. 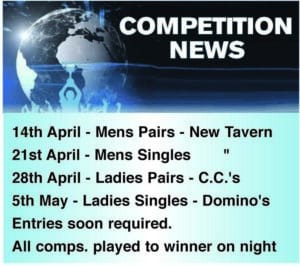 A real cliff hanger this one, match points determined only in the final 12th leg. Honours went the way of Toppers Phil de Lacy in a 3 legger with Rob Norbury, the Topper claiming the points on D16. lt was a fairly tame 1st half, outs from Barry Schofield, Andy Gildea, Paddy Winterbourne and Hugh Galloway, countered by Steve Collins and Bob Smith, Jane Wills125, Jean Randall 124.

The 1st 4 singles were shared, all going 3 legs, Steve Lumb and John Giggs for the visitors, Winterbourne, Galloway for the Toppers. Giggs defeating MOTM Maiden. Smith earned his sides MOTM with a 2-0 over Schofield for 6-5, prior to de Lacy’s match winner.

The top 4 teams in div.2 play each other this week, all are in with a chance of honours, 1st and 2nd place are up for grabs, the Bears improving their leg advantage after their visit to the Hub and the Raisers. A fine MOTM performance from Amanda Skinner was the highlight of this encounter.

Her scoring skills matched her finishing, a D8 in the triples was followed by a 64 out (pairs) and a 52 out (singles), all possible with 3×100, 125. The other Skinner Ken was nearly as lethal with 2 outs and 3 tons. Top scorers from the Raisers were Gill McCarthy, Carol Peace, Sue Spiers and Ali Scammell 134. Jo Burns the only Raiser to find D5 earning her a MOTM.

Sharon Williams deservedly earned her sides MOTM with 2 of the 3 Angels finishes, plus creditable scores. The other finish was via Nikki Dean. Sue Collins top scoring. Freakie John Bowden enjoyed a decent match winning leg with 95,117,D2, Groa Bryndis 100, D10 and finally Bryan Livsey winning both his singles and pairs, for his sides MOTM.

This Queens defeat leaves the royals Rock bottom and placing great importance to their last match of the season versus Angels Delight who sit 2 points ahead with a 6 leg advantage. This means Queens need to win 9-3 at Angels to draw level withe Delights for a tie. Anything more means Angels finish bottom, any less or of course a defeat and Queens finish with the addition of a spoon.

A solid performance from Graham Solomans 3×100,135,plus an 80 out,and Billy Dolling with 3 outs. Susan Frew however who merited MOTM with a D12 and a 100 game shot. Lorraine Cox fired the royals only double a D12, Debbie Wright earning MOTM finding the trebles with ease and a colossal score of 154.

The glimmer of a place in the top 2 spots of Division 2 was dashed when Tipsy Tiaras visited Dominoes Desperadoes and beat the home team 5 -7 again.   On home turf, Despo’s can play both their young bucks, Ben Kernahan and ‘Ashtray’ Panchal which theoretically gave them the edge, but team members Dave and Liz Minto had to dash out on a mission of mercy at the beginning of the match which left the hosts a man short in the 2nd triples, which the Tiaras capitalised on.

Desperate to make an impression Ben, Ash and Liz took the rest of the first half points between them.  A happy and relaxed Tiaras surprised themselves in the singles taking the 1st 4, Eliz (D20), Sharon Marshall (100, D20)Pat Schofield (92, 97, 1-D1) and Simone de Lacy (D5) to bring the Tiaras into draw territory.

Torrevieja Medical Director Didn´t Resign and They Have a Plan, says Health Minister