Setmana Gastronòmica de la Nyora i el Llagostí celebrates its XVIII Edition in June 2022, showcasing national and international foods including Señora and prawn caught from the Segura and Mediterranean Sea, along with emblematic products from the farmland, making Guardamar a culinary capital.

Guardamar celebrated the 750th anniversary of ‘Castell i la Vila Murada’ Castle this year along, along with the tenth edition of the Guardamar Route of Tapas. 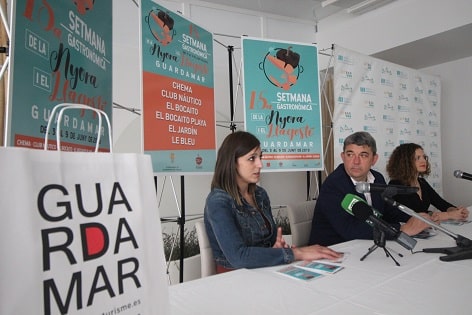 Guided tours and cultural activities, including an exhibition can be visited at the House of Culture until the end of 2021.

The book ‘750 Aniversari Vila i Castell de Guardamar’ will be presented along with a series of conferences.

Guardamar, located south of the Costa Blanca has 11km of beaches, bordering the Natural Park of La Pinada and Dunas de Guardamar, with over 800 hectares and 1,400 metres of width, one of the most extensive coastal forests on the Costa Blanca.

Rábita Califal is one of the most venerable and sacred Islamic monuments on the Iberian Peninsula.

Of extensive heritage, the archaeological site of La Fonteta circa. 8th century BC, it is one of the most notable Phoenician cities in the Mediterranean.

The Caliphal Rábita was later raised, depicting a foundation stone dating 944, considered one of the most venerable and sacred Islamic monuments on the Iberian Peninsula having been buried under the sand of the dunes for centuries.