FLAMINGOS have bred for the first time, producing hundreds of Flaminglets in the La Mata and Torrevieja lagoons nature park.

The breeding season has been aided by the reduction of salt, due to the mass of rainfall during recent months, which has given the flamingos increased food intake in the tranquil setting.

Over 600 Flaminglets are present, deemed as one of the most impressive natural parks of Valencia.

Las Salinas de Torrevieja spreads across 1,400 hectares and is separated from the Laguna de la Mata by an anticline – the Chaparral – but both are connected to the ocean through a canal known as Acequion. 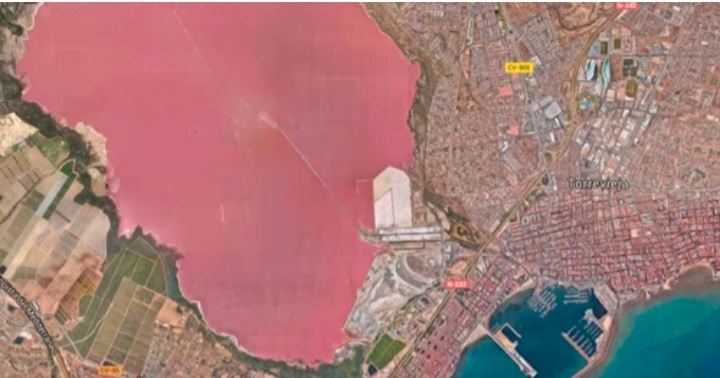 Acequion canal was created for the purpose of obtaining salt from the ocean in the 13th century. As a legacy of its past are huge mountains of salt piled high along the shore.

The natural lake offers a plethora of species of flora, although there is not much vegetation in the area, due to the high levels of salinity in the water.

When the time of flowering comes to Las Salinas, it is possible to see a rare show of saladillas – lavender – groundsel and the complex shaped orchids (collina) in full bloom. Towards the south of the lake, where the salt levels are not as high, it is possible to find more common Mediterranean vegetation, including pine trees and eucalyptus. The lake produces the archaeas (a micro-organism) and dunaliellas (micro- seaweeds) which synthesize the components of the salty water, in order to survive.

The existence of these two forms of life provides the pink, unique hue of the water.

Flamingos annually return to the natural park with approximately 2,000 flamingos – a flamboyance – during breeding season.

Brine shrimp are also present, a singular life form that requires a high level of salinity to survive. Flamingos colour depicts from their diet of pigments in food – carotenoids – bringing the red and pink colours to feathers.

Flamingos migrate mainly at night, during favourable tailwind and clear sky, and can travel approximately 600km (373 miles) in a night with a speed of 50-60kph (31-37 mph). Travelling during daylight Flamingos will fly at high altitudes, to avoid predators, including eagles.