The literal translation of Dolores is ‘Pains’ which is what many hundreds of people living in the small town, pop just over 7,000, are still feeling, almost 4 weeks after the dreadful Gota Fria and the subsequent flooding to large parts of the Vega Baja.

Hundreds of people were required to vacate their homes with many only recently returning to find the devastation and the losses that has so decimated their lives. There are pensioners, living on less than 800 euros a month, who have seen everything washed away and who will never be able to recover many of the things that they have lost.

Ruined furniture, household goods and waste is still piled high outside many properties. In Orihuela the council is still removing approximately 300 tons of household goods from flooded homes on a daily basis.

The Ayuntamiento in Dolores is doing much the same. The one big difference, however, is that the Orihuela process then sees the Department of Road Cleaning move the waste on to the Cañada Hermosa treatment plant in Murcia at a rate of almost 40 trucks a day while in Dolores the waste is simply being stockpiled on a large new dump where already it’s proving to be a hazard to the health of local residents as, with the return of the heat, it is already proving to be a breeding ground for fly’s, mosquitos, cockroaches, rats and many other types of vermin. 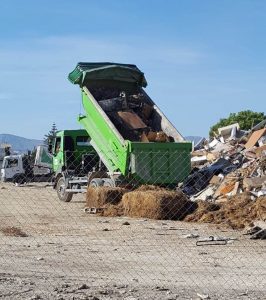 Initially the site was established for the use of the Dolores Council for water damaged waste but now it is being used by the general public from miles around who are arriving at the dump in increasing numbers, ladened down with absolutely anything they want to be rid of, farm waste, bales of straw, building materials, even old car parts and tyres.

Local residents of all nationalities, who live directly across the street, and in many cases, less than 10 metres from the dump, are at their wits end, having appealed to the Ayuntamiento to close the dump down.

“Unfortunately it is quickly become a very real hazard to our health but there appears to be no sympathy at all from the council. We have asked them to move the dump to sector 4/5, a large parcel of land where there are no properties and where there are no residents, but while this seems eminently sensible we have had neither acknowledgement nor response,” said one expat occupant.

“For every 2 loaded wagons that leave the dump bound for authorised sites, another 6 lorries arrive, so we are concerned that the situation will continue to get worse,” he continued.

“There are many far better locations for such sites. We just want the council to stop dumping across from our properties and consider re-establishing the dump at Sector 4/5.