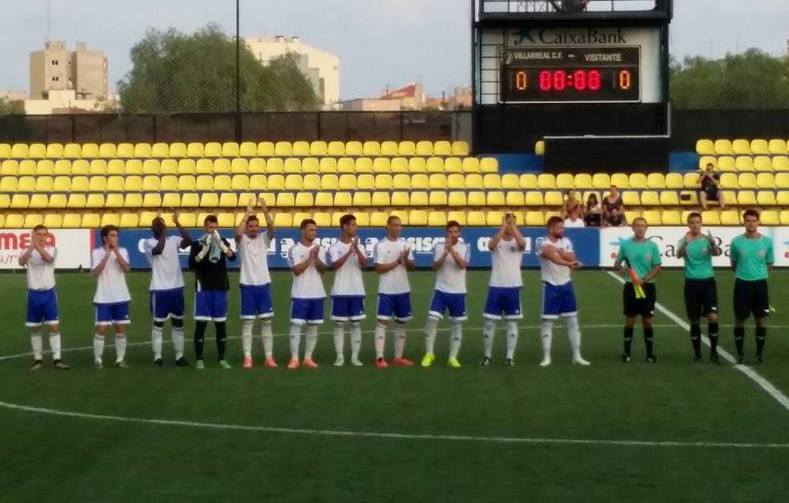 Torry made the long trip to Villarreal to face their 3rd string side last Sunday night.  The match was played inside the impressive Mini Estadi, which as we arrived was hosting a div 2b match involving the 2nd team against Gava, then 45 mins post match, the main La Liga outfit competed against Seville at Madrigal Stadium, some 3 kilometres away.  Last season the youthful Villarreal ´C´ lost only once on home soil, so Gabi Correa´s men knew they had to be at their very best if a positive result was to be achieved.

But unfortunately, things didn´t go quite to plan, for the hosts dominated the 1st half for long periods.  The same Torry starting XI as opening day fixture against Almoradi could and should have taken the lead against the run of play on 8 mins.  A defensive mix up presented Zapata with a 1 on 1, but from close range his full blooded shot was deflected for a corner off the keepers outstretched leg.  On 15 mins, a well worked move resulted in Alex firing the hosts in front, before Luis Carlos saw his rasping shot from the edge of the box skim the cross bar.  Midway through the half, Marcano pulled off a super save, then from the rebound Pastor cleared off the line as the hosts stepped up a gear.  Goal number 2 arrived via another piece of quality team work, culminating in Andrei squaring the ball to Chuca, who had the simple task of stroking it into an empty net.  Marcano was working marvels, stopping a 1 on 1 with his legs, but he could do nothing to prevent a 3rd goal as his defence were caught flat footed on 38 mins, leaving Simon a simple tap in.  Not to be outdone, Torry struck back well, being suitably rewarded for their gutsy response.  Not only were they awarded a penalty on 41 mins following a foul on Alex, but the culprit Pablo was shown a red card, before Zapata scored with ease.  Matheus should have reduced the deficit even more on the stroke of half time, but faced with yet another 1 on 1, his panicked shot lacked accuracy.

Being a player down didn´t change the hosts attacking philosophy, for they continued to test Marcano with accurate shots, both long a short ranged.  Having said that, Torry gave their all, and had it not been for a series of magnificent saves by keeper Fuoli, then at least a point would have been secured.  As it was, only a firm headed goal by Salamanca from a left wing cross by fellow sub Costa, was all they had to show for their hard worked efforts.

Next Sunday 4 September, ko 6.30pm, Torry host near neighbours Orihuela at Nelson Mendela Stadium.  This div 3 match has been designated as a Dia Del Club match, for which entrance will cost 12 euros, or 8 euros for season ticket holders.