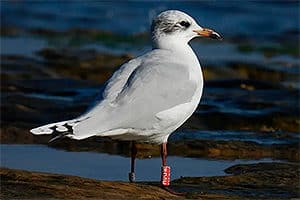 The ecologist group, Asociación de Amigos de los Humedales del Sur de Alicante (AHSA), have identified a black-headed gull in cabo Cervera in Torrevieja, which has been previously tagged in a visit to Hungary.

The specimen, which had a red ring, had been tagged in Lake Rétszilas in central Hungary in May of last year. The same bird gets around a bit and was observed twice in January of this year in Isla Cristina (Huelva), next to the border with Portugal, and later in Les Vieux Salins de Hyéres (France).

The AHSA has controlled eight birds from Hungary since 2001.