The LeaderPutting YOU at the Heart of the Community
Sign in / Join
Subscribe
Home Province of Almeria Mojacar MOJÁCAR VENUE FOR THE XXII EDITION OF THE SPANISH PETANQUE CHAMPIONSHIP FOR... 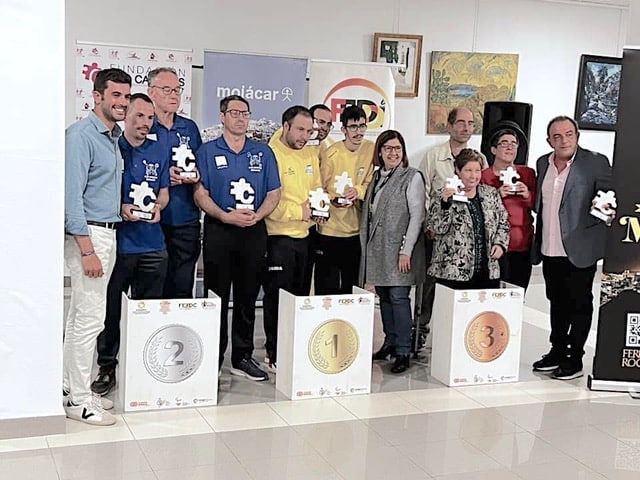 The XXII edition of the Spanish Petanque Championship for People with an Intellectual Disability has been held in Mojácar, for two days bringing together in the locality more than 400 participants from the 13 sports clubs from seven different communities, 120 sportspeople, technicians, companions and members of the public who didn’t want to miss this sporting event, that sees a greater number of sportspeople taking part in each edition, as well as a noticeable increase in the level of play.

The championship was held at the Mojácar Petanque Sports Club Facilities, with a great sporting atmosphere over the two days of the competition and the emotion of some very close matches in terms of the level of quality of the players and the scoreboards.

The trials were held at three levels of participation in accordance with the sporting discipline’s federative regulations: competition (threes), adapted (twos) and sports skills (individuals).

In the threes category, Rogelio Sánchez Ruiz from CD de Ciudad Real emerged the winner. In the twos, first place went to CD FEDDIG2008 from Madrid, and in shared skills, first position also went to Madrid, with Javier Valdés.

Mojácar Mayor, Rosa María Cano, attended the prize-giving, accompanied by the Sports Councillor, Francisco Garcia Cerdá, as well as the Provincial Sports Deputy, José Antonio García, the Territorial Delegate for Tourism, Culture and Sport, José Ángel Pérez, the Almería Provincial Council’s adapted sport expert; also not missing the event were José Antonio Antolín, head of the Los Carriles Foundation, and the President of the Los Carriles Foundation, Diego Martínez. All of them representatives of the bodies that organised this event, which has been held in the locality for a long time.

The Mojácar Mayor, Rosa María Cano, expressed her satisfaction on Mojácar, once again, being the venue for a gathering of these characteristics, which goes beyond the practice of sport and that allows the locality to contribute to highlighting the value of the sport as social integration and of a healthy life for everyone, even in the case of having a disability.

She also wanted to thank all the bodies collaborating on the event, as well as the FEDDI for their efforts, for their organisation and for their work throughout the year, and in particular the Los Carriles Foundation for their unconditional support for Mojácar.

In the spirit of everyone, the hope is that the next edition will also be based in Mojácar and that it could be the host of the XXIII Spanish Petanque Championship for People with an Intellectual Disability.