Although HM Queen Elizabeth was laid to rest two days earlier, the Torrevieja and Orihuela Costa Branches of the Royal British Legion made their final farewells to the former monarch in the packed Church of the Immaculate Conception, in Torrevieja city centre, on Wednesday.

Led by Fr Richard Seabrook, the service was organised by the Torrevieja Ayuntamiento, in a show of both admiration and respect to the former monarch, and in solidarity alongside it’s large British population in the city.

The mass was attended by the mayor, Eduardo Dolon, the Deputy mayor, Rosario Martínez, along with the Councillor for Foreign Residents, Gitte Lund Thomsen, Jean Paul Mulero who manages the Department of International Residents and his predecessor, Graham Knight. Also at the service was the councillor for security, Federico Alarcon Martinez and a number of other guests including Guradia Civil officer, Francisco Morales, founder of the N332 FB page. 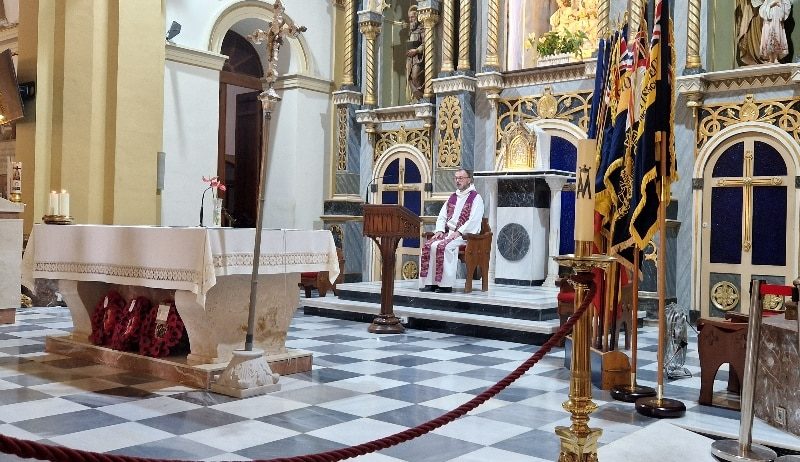 In his eulogy Fr Richard spoke of the transformation of London into a pageant of both mourning and celebration. The endless rows of Union Jacks. Acres of red Beefeater uniforms. Forests of raised arms with mobile phones snapping and filming. Flowers everywhere, whether laid in neat piles or pelting the black Jaguar hearse as it glided through the crowds as well as the dignity and respect shown during the period of mourning, and the service, itself by King Charles and members of the Royal Family.

He saluted the crisply dressed military men and women in uniform with their gleaming epaulets; the impeccably behaved and beautifully groomed horses; the traditional gun carriage that carried the queen’s father and grandfather, both kings, before her, rather fittingly ending with a tribute paid to Her Majesty by King Felipe IV of Spain, in which he said that Queen Elizabeth “will be remembered as one of the greatest monarchs of all time for her dignity, sense of duty, courage and devotion to her people throughout her entire reign”.

The Torrevieja Mayor, Eduardo Dolon, took up in the same vein as Fr Richard, praising the dedication shown by the Queen over her 70 year reign, her devotion to duty, dignity and the love and respect she has shown to the people of the United Kingdom and the Commonwealth since she was first thrust into the limelight upon the death of her father, George VI, back in 1952.

Under the direction of Parade Marshall, Mike Whitbread, the standard bearers were resplendent, Crescendo International choir were in fine voice and both bugler Mark Benton and Pipe Major Pipe Major Brian Day ensured that there wasn’t a dry eye in the church as the service finished, for the very first time in Torrevieja, with the National Anthem ‘ God Save the King’.