Pedro Zaragoza got up very early one morning, tucked yesterday’s newspapers down his jumper, fired up his trusty old Vespa and set off from his home on the sunny Costa Blanca of Spain. The year was 1960 – a lot of exciting new things were happening in most European countries post-war – but not in Spain. Where was the man heading? And what was he going for?

Pedro was the mayor of a fishing village of 1700 inhabitants – not because he wanted to be but somebody had to do it. This local businessman had an unusual problem on his hands, and there was really only one man who could solve it. That man lived in a palace in Madrid and in those days ruled Spain with an iron fist. His name was Francisco Franco and his paramilitary men, the feared Guardia Civil with their green three-pointed hats carried out his orders ruthlessly – and did his dirty work too.

Even though the Spanish Civil War had finished twenty-one years previously, throughout the country no-one dared to cause any trouble: even three people meeting on a street corner could be considered an illegal meeting and sticky questions asked. But if you did as you were told and obeyed the law you could leave your doors open at night, there was negligible crime in those days. Life was quiet and God-fearing.

Zaragoza’s problem was that he had started to have a number of Northern Europeans visiting his little pueblo on holiday, spending welcome money in his town and enjoying the lovely beaches and beautiful Meditteranean sea. But the age of the bikini was dawning and these new cool visitors liked to take their clothes off to feel the sun on their bodies.

Alas, Spanish laws were old-fashioned and strict Catholic tastes in Spain did not welcome such bold displays – the local Guardia Civil became involved in trying to keep everyone happy – with some difficulty.

After a few long hard hours on the road, Pedro finally reached Madrid and headed for El Pardo, Franco’s posh gaff. Surprisingly after several more patient hours our mayor was actually allowed to see the great man. To a lot of people’s amazement Franco listened with interest and told Pedro he would relax the laws – locally for now – to allow visitors to continue enjoying themselves unharassed on their holidays by the local law: and when the Generalisimo spoke everyone listened.

Just over a week later Franco’s wife Dona even visited the fishing village with a minister and his wife and stayed there for ten days, returning in later years many times – what an endorsement. The Sixties sexual revolution even reached strict Catholic Spain at last, and attitudes began to change – despite some teething ex-communication problems threatened by the Archbishop of Alicante.

In Benidorm – you guessed it was the original fishing village, didn’t you –  Pedro Zaragoza now sprang into action, proving to any doubters that he was a man of true vision. Making full use of the region’s ideal all-year-round climate, over the next few years the infrastructure of his home town was changed drastically.

By its two wide sweeping golden beaches adjacent to the Turquoise waters of the Med Zaragoza built big roads forty metres wide. Major routes like the Mediterraneo and Avenida Europa still exist in their original form, and cope today admirably with the amount of traffic which arrives on a daily basis: numbers of vehicles which Zaragoza had obviously never previously seen, but he knew would one day come to Benidorm – what a vision the man had.

Tall hotels were constructed with swimming pools and tennis courts, and holiday accommodation built to suit various budgets. The mayor also arranged for a major airport to be constructed at nearby Alicante in 1966 to allow for international air travel and keep Spain in line with other desirable European holiday resorts in such countries as Italy, Greece and France.

To promote the city Pedro Zaragoza also sent Queen Elizabeth II boxes of Turron, a local delicacy and cases of local wine ‘produced under the sun of Benidorm’ to enhance the Spanish message to the UK. Many celebrities were also invited to this fast-growing holiday resort as it exploded in size over the following decades. 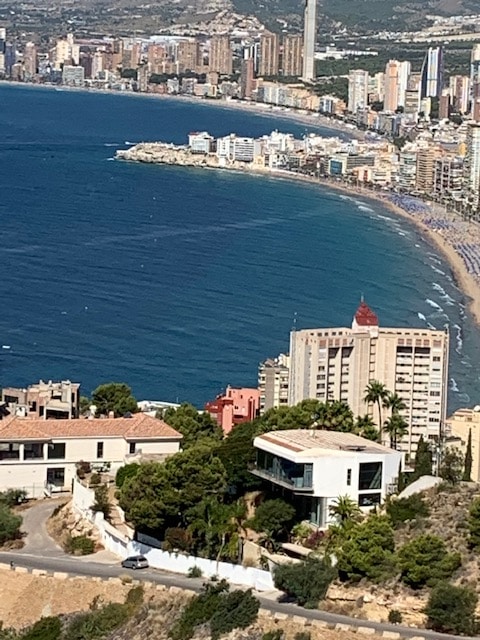 Today with over 300 skyscrapers only in London and Paris are there now more hotel beds than Benidorm, its nickname is  ‘BeniYork’ or the ‘Manhattan of the Meditteranean’. Five million visitors now come every year, and one in every ten Spanish holidaymakers come to Benidorm:  a truly international holiday resort of the world. Many Brits live permanently in the city today enjoying all Spain has to offer, and a very successful TV series used the city’s name to entertain in the UK.

As the years moved on whilst still being mayor Zaragoza studied law, and even in the last years of his life he studied tourism at the University of Alicante. Pedro graduated at the age of 82 and eventually died in 2008 aged 85. The architect Pedro Torrijos has defined Zaragoza as the ‘inventor’ of mass tourism in Spain and in the world. ‘He proposed a differentiating and groundbreaking urban plan with respect to what was in Spain’. Yes, the mighty Benidorm is all due to one brave man, proving the old adage ‘If you don’t ask, you don’t get’.

This week there is also much sorrow in the huge resort of Benidorm in mourning the death of our British Queen. Benidorm has taken the passing of our monarch very seriously and is awash with Union Jacks and pictures of the Queen to remind the world of the huge respect between our two countries.

‘Today we would like to mention the city of Benidorm whose authorities have placed a mast with a British flag at half-staff in one of its more touristic areas in memory of Queen Elizabeth. They also have used the marquees of the bus stops to honour her. Even the Spanish police officers have paid tribute to her with a military salute. We consider this is the best action ever done for a Town Hall towards the international community’.