Starting in just two weeks time, on 16 August, Thader resident Anne Allen will be taking her husband Peter on one last cycle ride.

Peter passed away in March but his ashes will be joining Anne as she makes the 1600 kilometre ride from Goodison Park in Liverpool to the Moi Gomez Stadium, home of his beloved CD Thader.

Cycling was the couple’s passion and it was during a 1994 cycling tour from Lands End to John O’Groats that the pair stopped off en route to wed in Gretna Green.

Peter’s other great love was football, so it is fitting that the ride will get underway at the home of Everton FC, with Anne riding the heavy steel framed bike that she got married on 28 years ago.

As a tribute to her husband, all the monies raised on the memorial ride will be shared between the Everton Foundation and Tranmere FC in the Community, who both carry out such good work in and around Liverpool, and more locally, CD Thader de Rojales, of which Anne is currently a club Director. 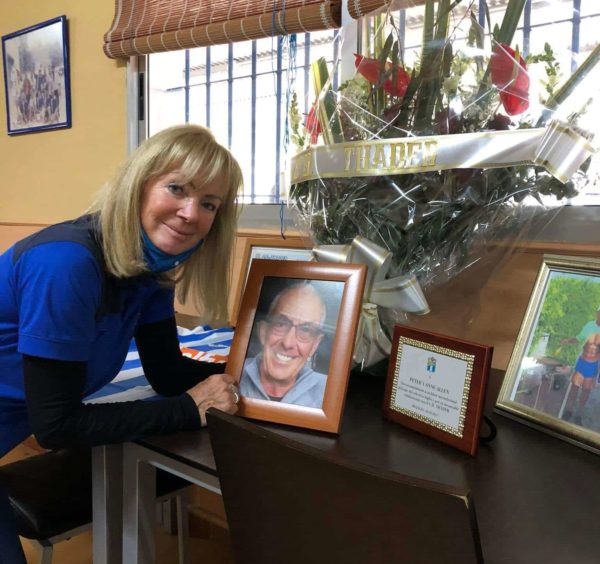 Anne told The Leader, “Funding is a constant struggle for CD Thader so it is fitting that in their centenary year Peter will be able to help the club that he supported for many years, both home and away, here in Spain”.

Anne will cycle from Everton to Portsmouth, taking the ferry across to Santander on 21 August, before then setting off from Northern Spain to her final destination at the home of CD Thader, the Moi Gomez Stadium, prior to the start of the season. Her route will cover approximately 1600km.

“Peter would have loved to be doing this with me in person. During one of our last conversations he told me that he wanted me to continue doing what we both loved doing for as long as I could.”

“So with his blessing, I will be setting off from Goodison Park on 16th August, which would have been my Dad’s 91st birthday,” Anne added.

Anne said that anyone is welcome to join her at anytime during the ride, either in UK or here in Spain and followers will be able to track her progress either on strava or facebook. https://www.facebook.com/anne.allen.543

Anne is hoping to raise a total of £5000 for the three good causes, The Everton Foundation, Tranmere in the Community and CD Thader de Rojales, and she has set up a Just Giving Page which has already reached over 50% of the target.

If you would like to donate to the cause and help these worthy causes you may do so at https://www.justgiving.com/crowdfunding/inmemoryofpeter-allen?utm_term=pK7BK7Qx6.

Alternatively go to the justgiving page and search for Peter Allen. Make sure you get the right one though, as there are a couple. You are looking for the Everton Foundation, Tranmere in the Community and CD Thader de Rojales.