The LeaderPutting YOU at the Heart of the Community
Sign in / Join
Subscribe
Home Environment The Removal of 11,000 Tons of Biomass Prevents a “new catastrophe” in... 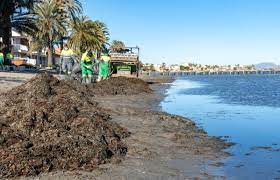 The Murcian Government has removed 10,509 tons of biomass from the Mar Menor since January 1, an amount six times higher than the average extracted annually since 2017 and which has made it possible to avoid a new “catastrophe” in the salty lagoon, according to the Scientific Committee in charge of monitoring this ecosystem.

In statements, the spokesman for the Scientific Advisory Committee, Emilio María Dolores, recalled that the Community has been removing biomass for several years but at values ​​”much lower” than those of this 2022. And the fact is that the average biomass removed in the last four years it may be around 1,600 or 1,700 tons per year. Thus, so far in 2022, a figure of biomass six times higher than what was removed during previous full years has been removed.

María Dolores has attributed this difference to the fact that “this year there is a greater proliferation of eggs because there has been a higher input of nutrients than in previous years”. For example, in 2021 around 720 tons of nitrogen entered the salty lagoon throughout the year, while in 2022 they have already exceeded 970 tons.

Therefore, this excess of nitrogen in the water, in different chemical forms, is favouring the generation of this proliferation of algae. If these 10,509 tons of biomass had not been removed, María Dolores pointed out that the effect would have been “catastrophic” for the ecosystem because the extraction of algae “means removing organic matter.”

The removed algae have been subjected to analyses after drying and the nitrogen and phosphorus they contained have been estimated. Based on the results, these 10,509 tons of biomass “equivalent to 219 tons of nitrogen and 7.29 tons of phosphorus” which, if not extracted, would be in the water and available to generate more problems.

“Both components would be favouring the eutrophication right now ” of the salty lagoon, according to Maria Dolores, who explains that removing nitrogen and phosphorus lowers the availability of nutrients within the water column and, therefore, reduces the risk that phytoplankton proliferate.

The Scientific Advisory Committee has no estimate of the biomass that would remain to be extracted from the Mar Menor because the egg is being generated every day and its proliferation depends on multiple factors such as nutrient levels, the competition of these nutrients with other living marine organisms, temperature and other oceanographic factors.

In this sense, the team cleans a different area every day based on the detection of the highest concentrations of biomass that are observed on the ground. In total, it has an average of 150 people integrated into brigades dedicated to this work every day. Of these, a hundred people carry out the task on foot and another 50 people at sea, belonging to the Cofradía de Pescadores de San Pedro del Pinatar.

Right now, these brigades respond to an emergency contract from the regional government, because the Committee warned that it was urgent to remove this biomass from the technical and scientific point of view. In total, the Community has invested between 5 and 7 million euro in emergency contracts for cleaning tasks.

The Professor of Ecology at the University of Murcia, Ángel Pérez Ruzafa, confirmed that everything that could be rapidly growing or proliferating biomass is being extracted, above all, the most nitrophilous and that they are the ones that have the most affinity with the discharges of urban type, nitrates and phosphorus.

He explained that they are species that take advantage of the available nutrients very quickly and have a tendency to accumulate. When they rot, later, they form a lot of organic matter. This is the biomass that has been causing siltation on the beaches in recent years.

“That mud, which remains very particulate on the beaches, moves with the waves and, in summer, those suspended particles are the ones that accumulate in the deep areas of the basin and end up causing anoxia,” according to Pérez Ruzafa, who points out that its withdrawal is very important, as has been warned for four or five years.

The problem erupted in the spring, when the water table began to rise and water came out not only through the Rambla del Albujón, but also through numerous riverbeds and beach areas. At that time, the scientists advised the removal of the biomass with manual rakes “so as not to alter the sediment and not harm the Cymodocea meadows, which not only do not cause any problems, but the biomass suffocates them and blocks the light”.

Pérez Ruzafa has indicated that the extraction task has been carried out in 2022 in a “very methodical” way and a large amount of biomass has been extracted. The most beneficial, in his opinion, is that “not only is the formation of organic matter prevented and the risk of anoxia reduced when high temperatures arrive, but the biomass has sequestered many of the nutrients that have been entering” the lagoon.

In this way, from the hand of that biomass many nitrates, nitrogen and phosphorus are extracted. “Thus, a double task is done to prevent the formation of sludge and to remove these nutrients”, he added.

He has stressed the importance of being “methodical” in the removal of this biomass, especially until a management infrastructure is achieved that reduces water inflows and lowers the water table. In fact, he has predicted that, the day that the water table is lowered below sea level, this type of task “will not be so necessary.”

“Any reduction in the nutrients that accumulate in the Mar Menor is essential to ensure that the ecosystem does not break,” according to Pérez Ruzafa, who explains that the removal of biomass plays a “fundamental” role in this regard.

However, he has also called for the pumping station of the Rambla del Albujón to be put into operation, which allows the extraction of between 30% and 40% of what is entering, a percentage that “is already enough for the salty lagoon to begin to have controllability”. On the other hand, when its functioning is interrupted, the risk of having a dystrophic crisis “is multiplied by ten”.

“The fact that there may be a phenomenon of anoxia or not will depend on whether the pumping station also works, on the weather conditions that are registered and on the amount of nutrients that enter between now and August,” according to Pérez Ruzafa, who has ensured, however, that the extraction of biomass “is essential to reduce risks.”

“The situation improves thanks to the cleaning”

The senior patron of the Cofradía de Pescadores de San Pedro del Pinatar, José Blaya , has pointed out that this removal of biomass “is a very positive action” for his group. In fact, he has verified that the situation is “stable” and is improving thanks to this cleaning.

He has pointed out that the fishermen are cleaning, above all, in the entire southern area of ​​the Mar Menor, which is where there are more eggs located. The Brotherhood has 50 people aboard some 35 vessels deployed every day, which take out some 50 tons of eggs daily.

In case of not having carried out this biomass extraction task, Blaya has recognised that fishing would have been more difficult because the nets fill with eggs and prevent the task.