On April 2, 1982, a British overseas territory, the Falkland Islands, 300 miles (500km) off the east coast of Argentina, was attacked.

After decades of diplomatic wrangling, the Argentines launched a surprise invasion of the Falkland Islands with their ruling military junta hoping finally to bring Las Malvinas, as the Islands are known in Argentina, under the control of Buenos Aires.

The invasion led to a joint force quickly being assembled and on April 5, 1982, the first elements set sail for the South Atlantic, to re-take the Falklands.

The Task Force was composed of 100 ships, carrying a reinforced 3 Commando Brigade with 2nd and 3rd Battalions, The Parachute Regiment attached, along with other units, including a reinforced Troop from The Blues and Royals, under the command of Brigadier Julian Thompson, RM.

A handful of Royal Navy personnel were involved in Minewarfare, Diving and Explosive Ordnance Disposal (EOD – known as Bomb & Mine Disposal) during Operation Corporate, in the Falkland Islands campaign in 1982.

Giving an insight into the Falklands War, former Royal Navy veteran diver Peter Gallant, 81, who is retired in Los Montesinos, Alicante, Spain, said: “I was not involved in the Falklands conflict, I was out the Navy by then.

“Most of my B & MD was in 1965/66 Singapore and Malaya, after the Japanese surrendered their munitions, dumped in the sea around the coast and buried in rubber plantations.  We had the job of clearing them.

“The Diving team in the Falklands, along with diving, were all trained in bomb and mine disposal.

“It was mainly for when explosives were washed up, or brought up on fishing nets.”

Peter added: “I knew Commander John Parry in Singapore as I trained is group on how to assemble the Geminis (rubber boats) prior to an operation they were going on.”

Two main Portsmouth-based Fleet Clearance Diving Teams (FCDTs 1 and 3 and up to five FCDTs) were active.

Sir Lawrence Freedman’s Official History of the Falklands Campaign says little about the activities of the Fleet Clearance Diving Teams, or the minesweeping trawlers of the specially formed 11th Mine Countermeasures (MCM) Squadron that swept 10 of the 21 deadly moored mines laid by the Argentinians in the approaches to Port Stanley.

Throughout the Falklands campaign, members of the FCDTs lived and worked in atrocious conditions, performing most of their bomb disposal and repair work at night, during lulls in the air raids, sleeping in cramped spaces, in odd nooks of ships or ashore in damp, makeshift shelters.

Much of their diving was conducted in dark fetid compartments, surrounded by jagged steel edges, explosive debris and freezing water, contaminated by oil, battery acid and raw sewage.

Early on, members of the FCDTs surrendered all their spare clothing to the survivors of Sir Galahad and other bombed ships, so they soon looked a piratical bunch.

When he first heard about the bomb disposal work conducted by the Fleet Clearance Diving Teams in the Falklands, Admiral of the Fleet Lord Fieldhouse GCB, GBE, the then Commander-in-Chief Fleet, said in wonderment to the Fleet Minewarfare & Clearance Diving Officer, Lt Cdr J H ‘Hamish’ Loudon MBE RN: “Who are these people and where do we get them from?”. 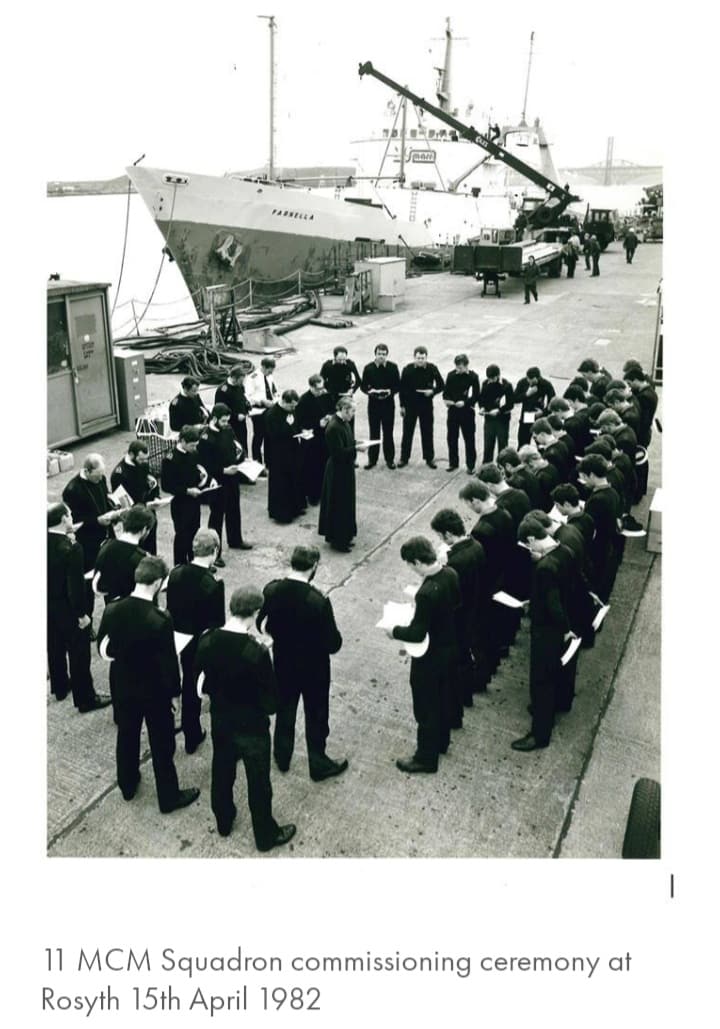 Sailing to and fro on their various often clandestine missions, carrying stores and personnel in the dark, with radar switched off and all lights extinguished for security, they frequently ran the risk of being rammed or fired on, by both enemy and friendly forces.

Acting as guinea pigs in channels, suspected of being mined and landing Special Forces raiding parties, they also swept 10 of the 21 deadly moored mines laid by the Argentinians in the approaches to Port Stanley; other mines had either broken adrift and floated away or failed to deploy properly.

When the Task Force was being prepared, in the event of hostilities, clearance divers would be required to conduct Explosive Ordnance Disposal (EOD), Battle Damage Assessment (BDA), Battle Damage Repair (BDR) and underwater reconnaissance in potential landing areas.

It was also recognised that minesweeping would be required, if the Argentinians laid sea mines in critical areas off the coast.

On 5 April 1982, Chris and his small MCM staff embarked in HMS Fearless and departed Portsmouth, with other elements of the Task Force.  Later on, he and his team were transferred to HMS Intrepid, but he was soon recalled to Fearless, because the Commodore needed his specialist advice ‘on tap’.

On 25 April 1982, the Agentinian garrison at Grytviken on South Georgia surrendered.

MCDO Lt (later Lt Cdr) David ‘Doc’ O’Connell, MBE RN, embarked in HMS Endurance, led a five-man team of ships’ divers, which spent three weeks clearing hazardous explosives and other materials from the submarine, before re-floating her so she could safely be towed out to sea and sunk. He was subsequently appointed an MBE.

“However, one of our nuclear powered submarines nearby heard them doing it. Where else had they laid them everyone wondered, what if the chosen landing approaches had been mined?

“These thoughts prompted an urgent need for mine countermeasures in the South Atlantic.

“Unfortunately the elderly ‘Ton’ Class coastal minesweepers and hunters in service at the time were unsuited for the South Atlantic weather, nor were any of the new replacements yet available.  “Accordingly, five Hull trawlers were requisitioned, some of which were fishing on the high seas when they had word.  “Each one was told to proceed to Rosyth and if needed were met by freezer trucks waiting on the jetty.

“They were emptied of catch and fishing gear before being fitted out as Minesweepers Auxiliary (MSA) and all within a couple of days.

“Three Fleet Clearance Diving Teams had deployed to the South Atlantic of which two were allocated to the Amphibious Task Group.

“The ship was kept well clear of hostilities in the nominated Tug, Repair and Logistics Area (TRALA) some 200 miles east of the Falkland Islands and out of range of the Argentine Air Force.

“But plans change and FCDT 3 was ordered to take passage in Royal Fleet Auxiliary (RFA) Sir Bedivere and head directly to the Falkland Islands at best speed.

“Once fuelled, the minesweeping trawlers headed south receiving vital minesweeping equipment necessary to stream an Oropesa sweep that was air dropped to them en route.”