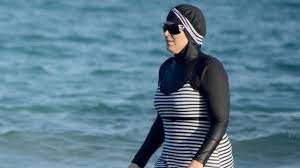 Elche town hall has authorised the use of the ‘burkini’ in all public swimming pools of the municipality, as of June 18.

This was stated in the Regulations for the Use of Municipal Sports Facilities, which includes all the rules published to date and has been approved by the government team made up of the PSOE and Compromís.

However, under the rules, “swimsuits below the knees will not be allowed in public pools, nor garments that are not specific to swimming, except for those with specific and express authorisation from the Department of Sports.”

The rule, which therefore bans Bermuda shorts and any other type of street clothing for hygiene reasons, makes an exception allowing women to wear the garment that covers their entire body except feet, hands, and face.

According to the government team, the burkini is an approved garment and, therefore, its use was already authorised, but now it is expressly included in the regulations that it can be accessed with garments below the knee if they are approved.

“Three years ago, there was controversy about the use of these garments, but as it is a bathing garment, no one who complies with the rules will be prevented from using the facilities,” explained the Councillor for Sports, Vicente Alberola.