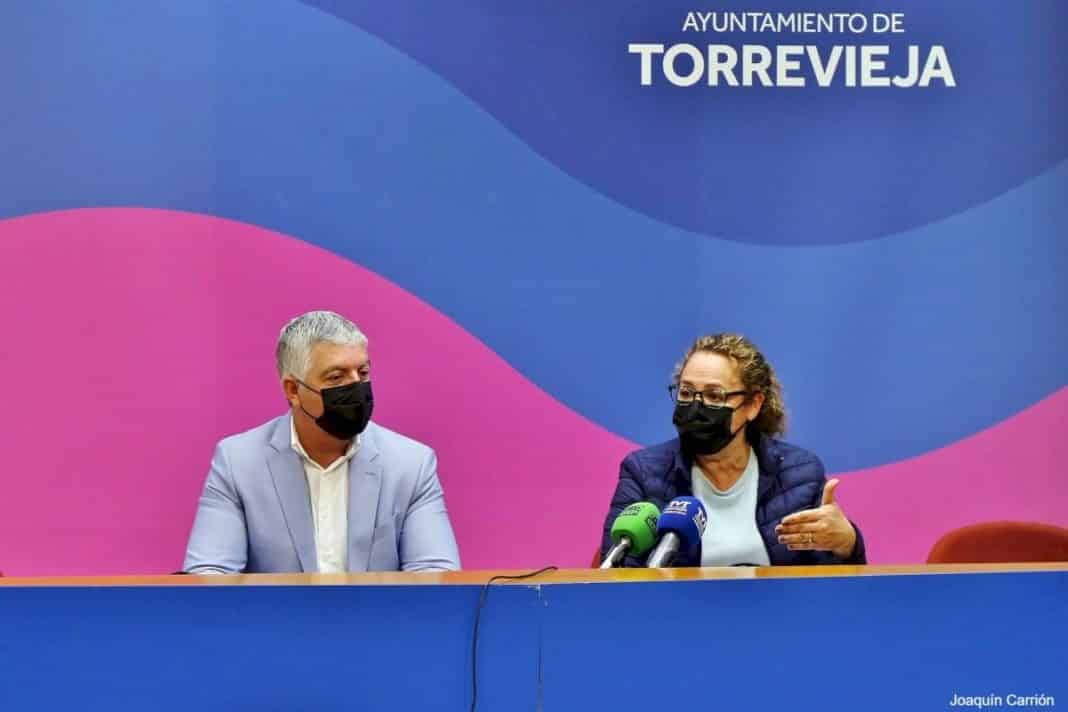 The Councillor for Transport, Beaches and Markets in Torrevieja, Antonio Vidal, and the Councillor for Parks and Gardens, Carmen Gómez, have presented a number of projects that they are going to develop in these municipal areas with the budget modification which incorporates almost 49 million euro.

Antonio Vidal has highlighted the item allocated to the regeneration of beaches, which is endowed with €1,038,000, to carry out an action on the Playa del Cura beach similar to the one already carried out on the Los Locos beach. It is a contribution of sand of more than 20,000m3, for which a preliminary study of the marine currents and the environmental impact will be carried out.

Because this project affects the immediate coastline, it is subject to the authorisation of provincial Costas department. In the words of the councillor “it is a complex action in which several administrations intervene, but there is a predisposition on both sides to improve this busy urban beach.”

Continuing with the beach area, the lifeguard booths will be replaced, a total of 8, and the acquisition of 5 watchtowers to complement and help improve the new lifeguard system on the beaches of Torrevieja.

Antonio Vidal has given a figure of €1,300,000 referring to controllers of access to beaches and promenades, it is the extension of the contract that provided service last summer and that meant that the beaches of Torrevieja were amongst the safest in Spain. “We maintain this item for security, since if the authorities were to implement preventive health measures again, we would not have the possibility of economically re-providing the beach control service,” Vidal explained.

The useful life of the infrastructure of the pedestrian pathway at La Mata has come to an end, so it is necessary to undertake action so that it can be travelled normally and that citizens can enjoy the walk in its entirety.

To this end, a proposal is being finalised to be studied and authorised by the Provincial Coastal Service, which would consist of the comprehensive repair of the entire section that would be pivoted on the existing base, materials resistant to the saline environment will be used to maintain the same layout.

Repairs have already been carried out on the section between Avenida de los Europeos and Avenida de Soria, as well as in the area of ​​the Molino del Agua park where the bridge was replaced, which had damage to its structure,

In addition, €421,000 is allocated to the Markets area for the replacement of infrastructures and goods for general use in the area where itinerant commerce is carried out every Friday. It consists of the elimination of flower beds and asphalt posts, as well as the repair of the damage caused by the rains.

The second parking lot enabled within the enclosure would be delimited, with the appropriate painting and signage. Among the actions to be carried out is also the creation of shaded and rest areas for users and clients.

In the area of ​​Parks and Gardens, councillor Carmen Gómez has highlighted the remodelling of existing green areas such as the green areas of Cabo Cervera where dry paving will be placed in the new pedestrian areas, the construction and planting of limited lateral planters with low curbs, the restoration of sports courts, as well as the placement of healthy games and street furniture.

In the area known as “Baños de Europa” the installation of sustainable irrigation will be carried out since the current one has reached the end of its useful life. In the Viñamar urbanisation (La Mata) the installation of the irrigation system will be replaced, as well as the reseeding of the lawn and the placement of street furniture.

Carmen Gómez wanted to highlight the first phase of the remodelling of the Parque de las Naciones with the complete restoration of the dragon slide, the paving of the corridors, as well as the study of the trees and the replacement of the lights.

In the Plaza de la Constitución, the first phase of an action that contemplates the replacement of the soil will be carried out, as it is a priority due to the state in which it is found due to the movement caused by the roots of the trees. Actions will also continue in the green area of ​​Nueva Torrevieja with the completion of the calisthenics park and the installation of bio-healthy exercises, children’s games and rest areas. The objective of the council is to allocate the area to sports use as the neighbours have requested.

Regarding the new maintenance contract for green areas, the councillor has indicated that “we are in the preparation of the maintenance specifications, irrigation installation and sources of the municipal area since Torrevieja has seen its amount increased by the inclusion of green areas until now they were not part of it.

In reference to children’s games, she has indicated that “we continue with the tender for the replacement after adapting the specifications to the current market situation”.