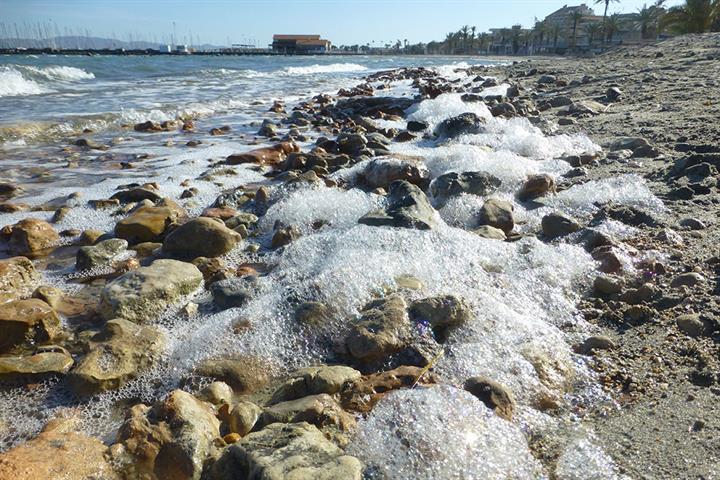 The Instituto Español de Oceanografía (Spanish Institute of Oceanography or IEO), has prepared a report at the request of the Ministry for the Ecological Transition and the Demographic Challenge (MITECO) as a result of the episode of torrential rains last March, which indicates the risk of an episode of exhaustion of oxygen and massive death of organisms in the Mar Menor.

The report, which updates the previous studies carried out by the IEO on the scientific monitoring of the state of the Mar Menor, focuses on the determining role of the contribution of nutrients and organic matter as the engine of eutrophication of the lagoon.

The authors point out that any analysis of the state of the lagoon must be contextualised in the eutrophication process that it has been suffering in recent decades due to the massive contribution of nutrients from human activity, based on intensive agriculture and mass tourism.

These substances, mainly nitrogen and phosphorus, enter the lagoon through surface runoff in the boulevards, through groundwater or by dragging water and materials from the basin during torrential rains such as those that have occurred in recent months, to cite a few examples.

Last March was the wettest in the Region of Murcia in the last 62 years and has also coincided with two particularly intense haze episodes. These climatic anomalies, together with the state of high concentration of nutrients already existing in the salty lagoon, form a perfect cocktail for the rapid growth of species such as macroalgae, and are the clearest example of the eutrophication process that the area has been experiencing for decades.

On the other hand, the report warns that the heavy rains also caused a sharp drop in salinity, a variable of great importance in the Mar Menor.

After the rainfall, and as a result of the rise in the water table, freshwater supplies continue to flow into the lagoon with a high content of nutrients, which will interfere with the seasonal dynamics of salinity in the lagoon system.

On the other hand, the IEO experts have detected a notable increase in the turbidity of the water column as of February 2022. This new episode responds fundamentally to the contributions of materials during the rainy episodes, but it could continue in the next weeks or even months by the development of phytoplankton communities.

In fact, the latest data available shows a sharp increase in chlorophyll which, although it is still lower than that recorded in events of explosive phytoplankton development, is likely to continue to grow due to the increase in temperatures and hours of sunshine typical of spring.

The IEO is a public research organisation dedicated to research in marine sciences, especially in relation to scientific knowledge of the oceans, the sustainability of fishery resources and the marine environment.

The IEO represents Spain in most international scientific and technological forums related to the sea and its resources.