This match featured husband and wife duo’s the Dollings, Billy and Lesley and the Spiers, Tony and Lesley, on opposing sides, Billys’ and Tony’s Horrors coming out on top. Andy Forrest set the tone, taking the first triple on D6, immediately cancelled out on D2 by super baker, Cheryl McGlynn.

The second half started with three straight wins and match points from Dolling D4, Graham Solomans 100, 60 out, and Forrest 100, D16. T. Spiers 2×100 proved insufficient against Lesley Dollings 95 and 48 game shot. The final two legs shared, Mike Tierney D12 and Sue Spiers nailing the Hellraisers fourth leg and MOTM as did Billy Dolling. Both couples survived the trauma and went home together.

Despite the scoreline, Milos put up a creditable performance against a strong Gap, one likely to earn points playing a lesser side. James Brown, who else but, opened the scoring with a lively 140 and 85 out, Gordon Cowan adding a further 140. The next three went the Gaps way via Sam Salt, D16, D10, and Brown using 3 arrows for a 68 shot out.

Chelsea Campbell halted the slide with a ton and D20, only for Cowan 100 to wrap up the first half on D20. Good scores from the Steves, Bailey and Formby, plus Campbell not quite enough though, to reduce the 1-5 half time result.

Carlos ” Esco ” ensured the draw on 40 after 95, 2×100, Salt closing the match on D16. Paul Moody D4 edged out Campbell in a scorcher, Cowan and Brown making it ten for the visitors. Richie McSweeney D20 somehow overcoming a free scoring Bliss Wright for the hosts. MOTM Campbell and Moody.

As usual Bob Smiths’ Dannys bar tuned up mob handed, to the point the furniture had to be rearranged to accomodate the travellers. A lively and friendly crowd, captain Bob gives them all a game sometime through the evening. With the emphasis on a good time by all, it doesn’t always benefit the scoreline.

Hyenas were in reasonable form, finding themselves 6 up prior to the mandatory fish n chips fayre. Mark Ellis excelling with 140, 3×100,95,85 and a D20. John Eyre supporting with two outs.

Like many teams will this term, the Totties came away from the champions venue winless. Some good scoring but no doubles from the visitors namely, Sharon Williams, Christine Hutchinson, Henni Oortwijn and MOTM , Kim Forbes were the highlights from the visitors. 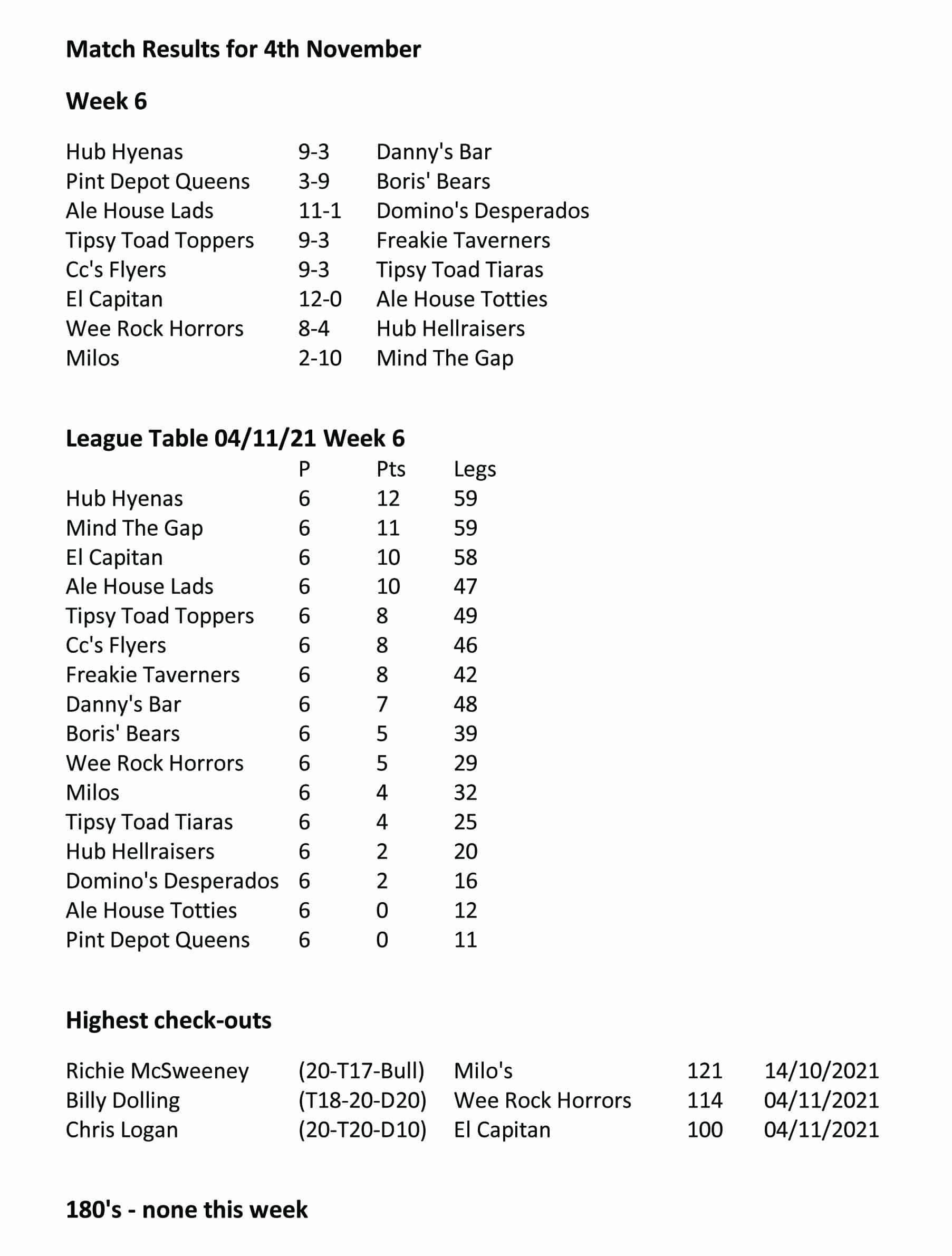 l thought this match would be a little closer, it did however contain plenty of high scoring from both sides. A total of 14 tons and 31 80+ scores, evidence of a tighter match than the result suggests.

Toppers move up 2 league places, level on points with Freakies but a superior leg advantage. First man ” Ton Machine” Lee Maiden, opened with 2×100 and D15, the lead erased by Michelle Halliday on D20.

Andy Gildea scored his 3rd ton of the night and D16, for victory and points, over an unlucky Willis, Steph Simpson securing the draw in the 1st single. Annette Dobson a nice 49 out and Livesy 100, D10 claimed the other 2 Freakie legs. Maiden managed the unusual feat of 4 winning doubles meriting him MOTM, Livesy awarded the visitors.

It’s really something to see young players watch their dad, pick up some darts and get the bug for ‘the arrows’.  CC’s Jesus Madrid is no exception and will certainly be one to watch in the coming seasons and tournaments along with the likes of Liam Lumb of Boris’ Bears.

With great style and ease, young Jesus got some decent scores 100, 120, 140 and a 2 darter (6-D7) in his singles against Sharon Marshall.  A chip off the old block, Dad Suso Madrid’s T11-1-D20 check-out gives the lad something to aspire but it won’t be long before the tables are turned.

Another notable performance from CC’s depths came from Charles Pritchett (2 x100, 121) who collected 3 leg points out of his 4 oche appearances.  The Tiaras were polished and sparkling and gave a great duet from Sharon Marshall (134) and Lisa Ivill in their pairs against Captain Cameron Nesbitt and Suso, but alas no triumph.  Once again it was the singles matches where the ladies shone, Simone de Lacy (105; D2), Wendy Hayward (D3) and MOTM Elizabeth Cowan (140; 16-D20) getting 3 jewels for the Tiaras and Lisa (85, 83) and Pat Schofield (100) narrowly missing out on theirs.

Mark’s music tastes are a little diverse, he struts his stuff to Disco Funk, spends hours listening to his massive collection of the works from Mozart, Beethoven, Bach etc. occasionally turning to Earth Wind and Fire. lt doesn’t stop there either, he’s shortly to see live, Paul Weller, Jools Holland, The Stranglers and a rendition of “Handels Messiah”.

Having visited Cuba and Turkey, the Far East beckons, where he can sample the culinary delights from Japan, Singapore and China. Talking of food, the ” Potters ” choice of dinner guests would include John Lennon and Martin Luther King, putting the world to rights, whilst being entertained by Stevie Wonder tinkling the “ivories”.

Mark has two sons, Josh and Luke both currently residing in the U.K., Josh a recent visitor to Costa Blanca. Mark enjoys a 14 golf handicap, so a perfect day for him would be 18 holes at Las Colinas, followed by a visit to the salubrious restaurant surroundings of El Meson de la Costa, Torrevieja, with friends.

During discussions with Mark regarding our presentation evening , l discovered he’s an accomplished Flautist, Guitarist and occasional Bagpiper and despite his protestations he will NOT however be our entertainment May next, l can assure all.