There are more than a few nervous milestones along the quivering pathway that leads from boyhood into manhood. The first kiss with a girl is a major signpost along that path – but there are others too. A teenage boy can be hit with a bout of gawkiness and self-consciousness as his voice ‘breaks’.

There are ‘rites of passage’ along that path, and in my youth, the big one here was ‘getting into the long trousers.’ This one doesn’t apply to today’s ‘nearly men’, as long trousers can be worn from the day they leave the nappies. Back in the day, it was oh so different.

Nobody wore a long trousers in primary school, except the master. After leaving national school, it now became a question of timing. Lads who were big for their age could take the big step a little sooner. I was small for my age, so covering my scabby knees wasn’t rushed. But it made no difference; big or small, for as soon as you got into long pants you could expect the jeering to start. ‘Who lifted you into them?’ became the regular salutation until neighbours and friends got used to the new you.

When I attended ‘finishing school’, ie; ‘The Tech’ in Castlepollard, there were only two first-year boys in short trousers – and of course I was one of them. 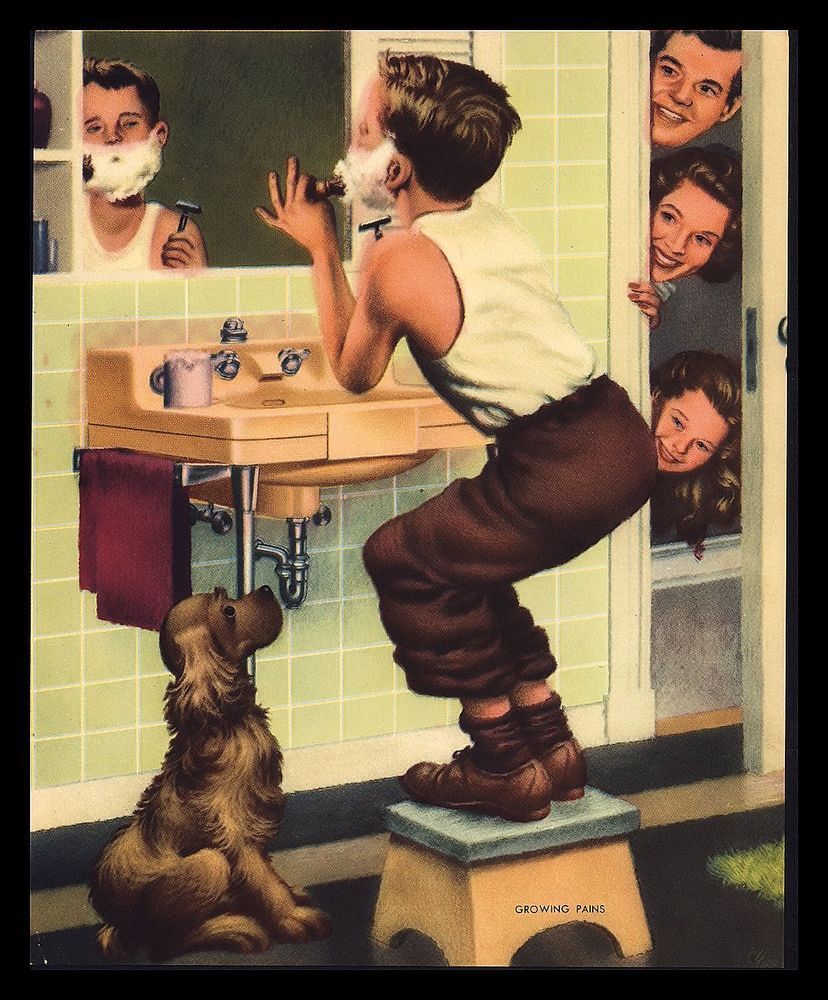 My parents bought me my first long trousers for a trip to Dublin when Joe Sherwin and I went up to do an exam for a position in Guinness’s. I felt great because nobody in Dublin, other than Aunt Kathleen had ever seen me in short trousers and nobody ‘slagged’ me!

The voice breaking, the first kiss, the long trousers – all milestones along the aforementioned path of life, but more than anything else surely the strongest claim on manhood has to be the first shave? My first shave – no more than the other examples, was not a simple event. Therein lies a story and you are going to hear about it for its first airing now!

A subplot to my main shaving story is that when I was about twelve years old, somebody gave my father a present of an expensive leather shaving set. It contained a razor, a shaving stick, oils, creams and stuff to me that smelled great! Turns out that Daddy was never interested in any such accoutrements! His well-worn razor, a ‘Mac Smile’ blade and a bar of soap was as far into modern civilisation as he intended going! After a period with the set being moved hither and thither, my mother gave it to me and told me to keep it until I was old enough to shave. I found a good hiding place for the leather case and every so often I would root it out, dust it down, and take a smell out of the little bottle of lotion!

I commenced my bar-apprenticeship in Delvin when I was fifteen. My superior, Francie Campbell, was staying ‘in digs’ with Tom and Mrs Fay. I was working for ten shillings a week – but the best part of my job was that my boss, Bertie Merlehen, was paying for my dinner every day in Fays. I was well fed by May Fay. She told me she was well used to young lads with big appetites down in Glenidan. I don’t know how much Bertie was paying May for my meals, but she definitely didn’t have much profit on me!

Yes … I know, Lads, this story is meant to be about shaving. Men started shaving between 60,000 and 100,000 years ago and they used sea shells as razors. I imagine the shells didn’t do as good a job as a ‘Mach 3’ and due to ‘beard rash’ on ladies faces the sales of Pond’s Cream must have soared during that period. My first shave was a much smoother affair.

One evening Tom (‘Star’) Fay was shaving in front of a mirror as I finished eating. This was the first time I had ever seen, or heard of an electric razor. Tom obviously noticed how intrigued I was by the operation and he offered to ‘give me a shave’. He was a noted prankster anyway. May was against it, telling him to ‘leave the young lad alone.’ Anyway, I was suitably excited by the prospect and offered up my boyish countenance. And that my friends, was how I had my very first shave!

Being young only comes once in life. The trick is to make it last as long as you can.