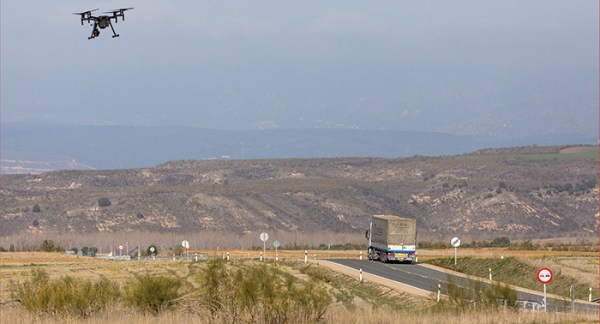 Since 2019, the DGT has used eleven drones to monitor, control and manage traffic. They are primarily intended for traffic surveillance and, according to the rules that regulate its operation, “in particular through these systems, the following will be intensified: surveillance in risky sections; those aimed at the protection of vulnerable users of roads in transit, in particular, cyclists, motorcyclists and pedestrians; monitoring distractions while driving; and speed controls”.

Three drones have the technical report from the Spanish Metrology Centre to monitor traffic and detect violations, while the remaining 8 are used to monitor and regulate traffic. In fact, between January to August 2020, the drones –which have flown more than 430 hours: 316 for surveillance and 55 for regulation– had captured 220 infractions, the majority for not respecting road priority (28%). They also highlight the incorrect use of seat belts (16%), the use of the mobile phone behind the wheel (12%) or not respecting the longitudinal markings of the road (12%). A clear example in the protection of vulnerable people is that 4% of the infractions captured by drones are for overtaking cyclists without respecting the minimum safety distance. This is how it works, step by step 1: CHOOSE THE SECTION TO WATCH Based on their data, the provincial heads of the DGT and the subsectors of the Traffic Group of the Civil Guard, are the ones who determine which sections would need drones to monitor the movement. With these data, and taking into account the limitations due to security reasons (uncontrolled airspace, far from aerodromes and airports, possibility of parking a unit to carry out the control …), a list of mission areas and a calendar of dates and sections is created. 2: A SAFE LAUNCH BASE Once the point to be monitored with the drones has been determined in advance and in accordance with the Provincial Traffic Headquarters, a point close to the section to be monitored is chosen where the van of the Air Media Unit (UMA) can be safely parked. There, said unit deploys a windsock –to control the direction and speed of the wind, which can affect the flight–, and marks a security perimeter on the ground where the drone will take off and land. 3: ASSEMBLE AND CHECK The next step is to assemble the drone (which travels disassembled and protected) and to check the operation and calibration of the device and the cameras that will serve to monitor the road and capture and record possible infractions. Afterwards, it is located in the safety area for take-off and, once the battery is installed – with a flight autonomy of about 20 minutes, depending on the characteristics of the flight and the weather – the device is ready to undertake the mission. 4: TWO OPERATORS The two operators involved in the surveillance make the drone take off, which on its flight will not cross the road – unless expressly authorised – nor will it fly above 120 meters, or near strategic places – airfields, airports, security facilities … – and always in the pilot’s field of vision. The drone is always operated by an accredited pilot who controls the flight; the camera can be controlled and managed either by an official of the UMA or by an agent of the Traffic Group of the Civil Guard, which determines the way of notifying the fine. 5: FLYING AND OBSERVING Then begins the most difficult part of the mission. The drone flies over the vicinity of the road at the point or points where surveillance is requested – for example, in our specific case it was a crossing regulated by a Stop sign. Meanwhile, the camera operator is dedicated to observing and monitoring the manoeuvres of the drivers, whose infractions are recorded on computer media in the equipment that moves the Air Resources Unit. 6: NOTIFY THE COMPLAINT Depending on the availability, or not, a patrol of the Traffic Group of the Civil Guard is located in the vicinity of the guarded road and, in the event of an infraction, following the instructions of the drone camera operator, stops the responsible driver and notifies them of the opening of the sanctioning file on site. Naturally, except in cases where it is impossible to do so determined by the corresponding regulations. The post The Mini Eye in the Sky first appeared on N332.es - Driving In Spain.