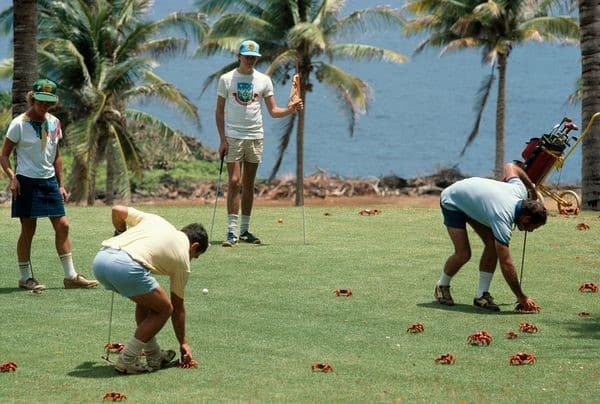 GOLF BUGGIES ARE PROVIDED  for getting about Fort Wilderness Camping Ground in the Walt Disney World Resort, Orlando, and every Christmas a parade of decorated buggies tours the huge site.  Every kind of amusement is provided at Fort Wilderness except, surprisingly, golf.

THE CHRISTMAS ISLAND golf course is situated 2600 kms northwest of Perth.  Cooled by the south east trade winds, the 9-hole par 64 course is perched on a volcanic plateau bordered by the Indian Ocean to the east and tropical jungle to the west.   Run entirely by volunteers, the course was first established in 1955 by Jack Pettigrew, who had cleared the land years before whilst being held prisoner by the Japanese forces.

120 million crabs live on the island and every year they scuttle to the sea causing disruption to what little traffic there is and providing unusual hazards everywhere on the course.  You are advised to either check the hole before retrieving your ball, or count your fingers afterwards.

CALLAWAY, named World’s Leading Brand at the 2020 World Golf Awards, have for once neglected the Bryson DeChambeaux of this world and designed their B21 range for average speed golfers.  The B21 driver is designed to deliver high launch, low spin and significant draw bias in a large, forgiving head shape with AI Designed FlashFace technology, Jailbreak bars to maximise ball speed and a Triaxial carbon crown, providing distance and accuracy.

The B21 fairway woods have increased offset aimed to reduce slice and increase distance regardless of swing speed, and Golf Monthly describes them as “Great fairway woods for most club golfers, especially if you struggle with a miss to the right or getting the ball up in the air.”

The B21 irons, the first to be designed with AI, are described as very forgiving but otherwise similar to Callaway’s cheaper Mavriks.  Anyway, they all cost a bomb so better get that letter off to Santa.

FINAL ROUND of the Joburg Open:  the two leading contenders, Joachim Hansen and local favourite Wilco Nienaber chatted amicably to each other all the way round until they tied at 19 under.   Then apparently the pleasantries dried up.  I can imagine  the conversation from then on:  Nienaber to Hansen in best Pythonesque tradition:  “I fart in your general direction, you Danish pastry, your mother was a hamster and your father smelt of elderberries!”  Hansen to Nienaber: “I wave my private parts at you, local yob-type son of a window dresser!”  Naturally, after Hansen won the championship the friendly chat was immediately resumed.

THE WORLD GOLF AWARDS, the first to be held in the capital of the UAE went ahead on 29th October  at the Royal Dubai Creek Golf and Yacht Club (can’t cancel their jollies just because of a pandemic.)  Saudi Arabia, one of the world’s most dynamic new golfing markets, missed out on the big prizes but secured the Vision Award for their “Outstanding strategic contribution and commitment to the world’s first national golf sustainability initiative.” (In other words better give them a gong for something.)

EXCERPT FROM  ‘Commander in Cheat,How golf explains Trump:’  by sportswriter Rick Reilly:   “Trump doesn’t just cheat at golf. He cheats like a three-card Monte dealer. He throws it, boots it, and moves it. He lies about his lies. At Winged Foot, where Trump is a member, the caddies got so used to seeing him kick his ball back onto the fairway they nicknamed him: “Pele.”

Available from Hachette books.  And a pretty good Hachet job it is.

Just to say that the generous golfers of Orihuela Costa raised over €7000 in a very difficult year.  Many thanks to everyone for a great effort!

Wishing you all a very Happy Christmas and hopefully more golfing in 2021 than we had in 2020!