Plenty of darts being played currently, unfortunately it’s all on television. Last weekend the BetVictor World Cup took place in the beautiful city of Salzburg Austria. Gerwyn Price and Jonny Clayton ( Wales ) triumphed over the England duo of Michael Smith and Rob Cross 3-0 in the final to claim the £ 70,000 first prize. Their joint average in the best of 5 format was 103, winning each of the opening singles, Price beating Smith 4-1, Clayton overcoming Cross 4-2, finally the doubles going the Welshmens way 4-3.

The big one to look forward to over the Christmas period is the P.D.C. World Championship at the usual venue of Alexandra Palace, London. Once again being sponsored by William Hill the event commences on December 18th concluding on January 4th 2021. A total prize fund of £ 2,500,000 will be shared by the 96 qualifiers, 1st round losers receive £ 7,500, runner up £ 200,000 and the winner £ 500,000. Serious cash, the sport now boasting several millionaires.

Peter Wright will be hoping to defend his title and is seeded number 2 behind 1st seed Michael van Gerwen. Players to watch out for is man of the moment Welshman Gerwyn Price (no. 3), Michael Smith and Nathan Aspinall. ln fact the player out of those four unlikely to win is the Dutchman, van Gerwen who is not exactly struggling, but not on his usual game.

lf l had to gamble my last 50 quid it would have to go on Price ( not my cup of tea ) but a prolific scorer, great set ups and clinical finishing. Van Gerwen of late, only seems to have two of the three attributes in his matches, not good enough at the standard required. The one who could surprise us all is Aspinall, the 29 year old from Stockton, England. Losing semi finalist in 2019 to Smith ( 3-6 ) and again in 2020 to M.V.G. ( 3-6 ), he could well go the distance. Expect to see him in the Quarters at least. 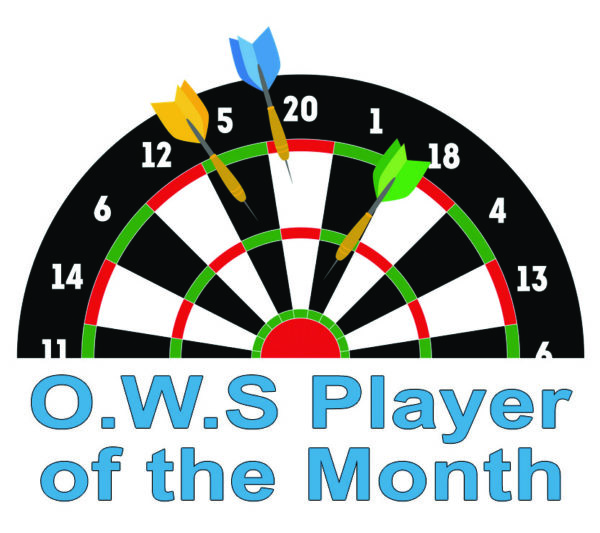 A new initiative to this season determined by nominations from team captains for consistent, outstanding, or improved performances. lndependently the committee place their top five nominees, using a points system, from which two are declared winners.

Kim received her prize at Chemies from league chair Paul Durrant with plenty of support from fellow Chicks. The Australian born Scot, has only been playing a year, but her improvement has been immense says Chicks skipper Winnie McKay. Married to Paul for 31 years, they left their Edinburgh home for Spain some 3 years ago, to live in the Villa Martin area. 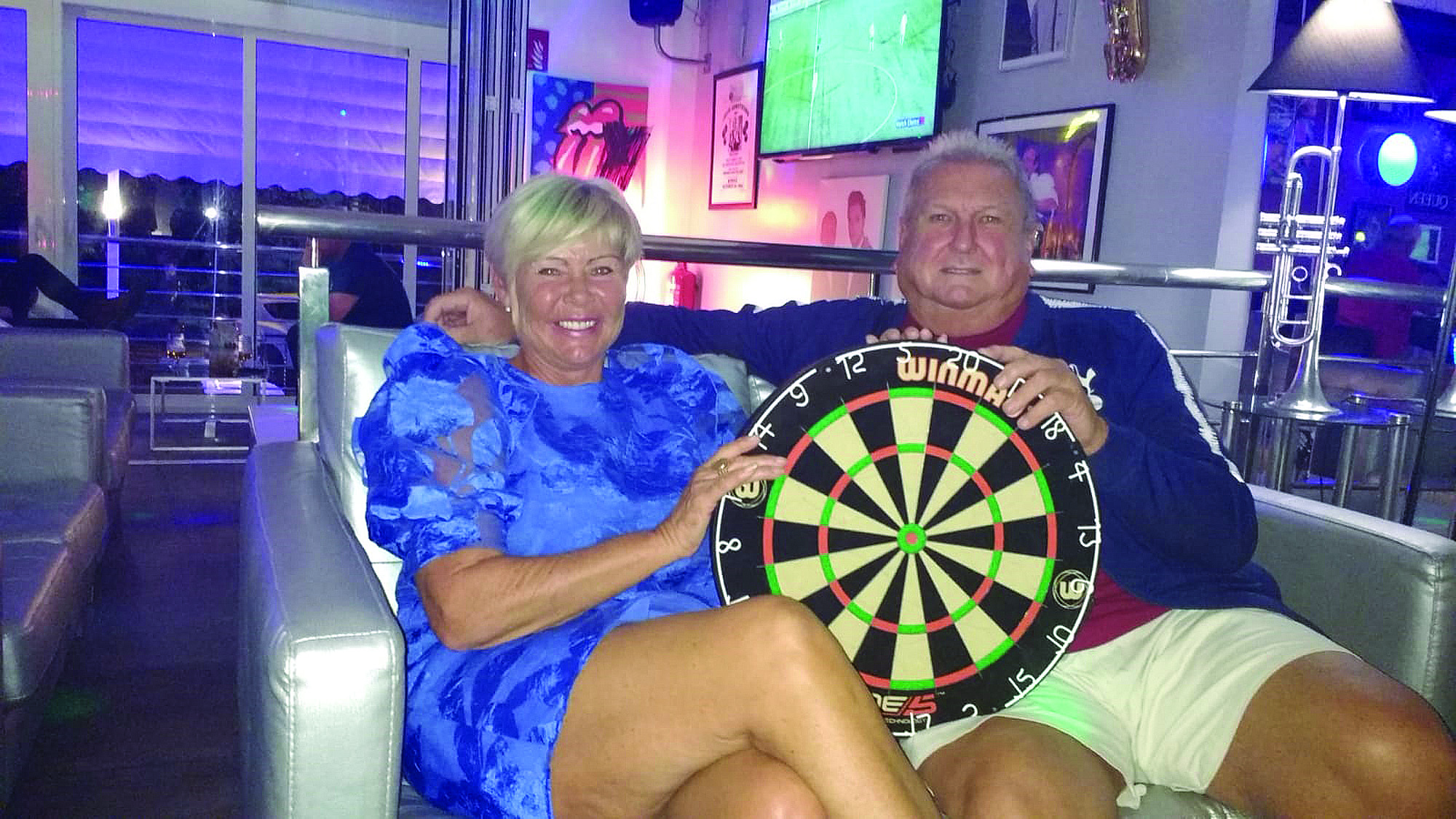 Apart from the odd Malibu or three, Kims other passion is  ” Northern Soul ” dance, a regular feature at Gino Rouzee’s Hi Life restaurant and music venue. The amiable Scot also likes a little controversy, naming the argumentative Piers Morgan as one of her favoured dinner party guests.

C.C.’s, Ken Skinner received his dartboard from league secretary Simone de Lacy at his home venue. A familiar face around the local dart scene was there to witness the event, Amanda his daughter, her sister Emma back in Kent. 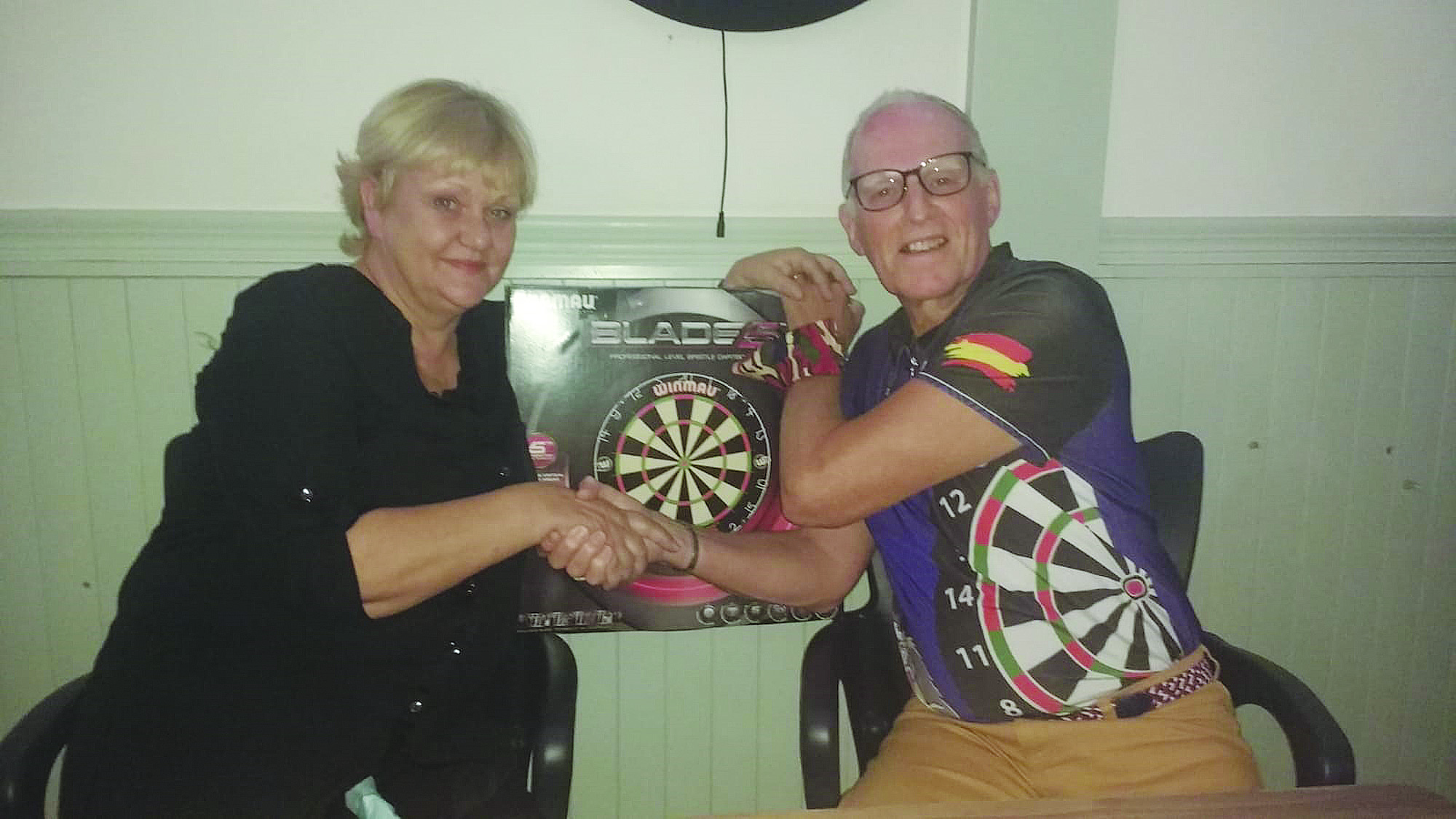 Ken is an accomplished sign writer, still keeping his hand in now, with regular commissions. Not surprisingly the 72 year old from Cambridge still prefers music from the 60’s and 70’s, having all Status Quo’s albums and a photo showing a wood carving he presented to Quo in their recording studio. Subject to the President in situ, the U.S.A. is the country he likes to visit.

An ideal day for the arrow sharpshooter, is lazing by the pool, being waited on by Kylie Minogue. Hope wife Jane doesn’t read this. Later in the evening ( energy allowing ) his three dinner guests would be father Jack, Frank Sinatra and Victoria Wood. A very interesting guy, Ken was nominated by Christine Pattison.

Bliss and partner James Brown make a formidable duo, both on the oche and businesswise at the well appointed La Zenia ” Gap ” bar, where James admits his other half wears the trousers. Having migrated with family from her home town of Blackburn, ( she’s a Rovers supporter ) , when twelve, the Lancashire lass now resides in Campoamor with James, honing her fluent Spanish linguistic skills.

As well as throwing some decent arrows herself, Bliss avidly watches the pro dart scene, naming 29 year old Nathan Aspinall as a must watch, preferring the rising darts star to Coronation Street any day, or night. Off the oche, relaxing with a Gin n Tonic, she wistfully imagines herself as Patrick Swayze’s co star, Jennifer Grey, in the blockbuster Dirty Dancing. Everyone remembers the scene where they dance together for the films hit song ( l’ve had ) ” The Time of My Life. ” 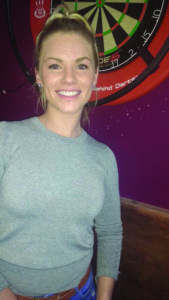 Obviously a helpless romantic, what else but dinner with James at the ” wallet busting ” fine dining eaterie of Torrevieja’s, Maison de la Costa, finishing off the evening with a nightcap at home. Talking food, dinner party invitations for the ” dirty dancer”  would be extended to Whitney Houston, Barack Obama and Michael Mclntyre, an interesting mixed triple.

lf a fourth guest were allowed the Tungsten Lass would welcome George Clooney, can’t think why. Ok he’s charming, good looking and wealthy, so what ! James you just need to go grey.

Given the opportunity away from the busy ” Gap,” Bliss would love to revisit the States, particularly New York, or the Caribbean, or time permitting ,Mexico, for some spicy fayre and a shot or two of Tequila.