The number of coronavirus cases diagnosed is of those diagnosed by PCR, the most reliable test to detect the virus. Up to last Thursday the cases of those diagnosed from antibody tests were added, but that figure is no longer used by the Ministry of Health in the calculation.

Director of the Centre for Coordination of Health Alerts and Emergencies, Fernando Simón said “We are in numbers that we have not seen for a long time. Today we have 288 deaths, for the first time in a long time, we are below 300, but although the data shows a downward trend”, he added that “as always, over a weekend you have to assess it cautiously.”

“We are moving forward in the evolution of this epidemic. We are passing phases and this is also evident in the way we communicate data. This Monday begins a new period where our objective is no longer to reach the top of the curve and bend it, but to consolidate and start thinking about how we are going to go to the next phase,” said Simon.

A further 62 patients have been discharged as the number of hospitalized and admitted to the ICU continues to decrease.

With this, there are now 433 deaths in the Alicante regions since the start of the pandemic, while the total number of cases amounts to 3,823. In the Community as a whole, deaths amount to 1,190, while those infected are 11,372.

The one death in the province is the lowest in weeks, although the same cannot be said for the rest of the Community, with ten people dying in Valencia and seven in Castellón.

The daily infections have not decreased in parallel either, since those announced today are 25 more than the 42 registered yesterday, although in Valencia the increase is much greater (133 today compared to 57 yesterday). In Castellón they have decreased from 118 to 49.

However, the Minister of Health, Ana Barceló , said yesterday that the performance of more tests allowed to identify more cases.

Discharges maintain an upward trend, while there are fewer hospitalized patients, reflecting that the impact of the pandemic on public health and the health system is gradually being reduced.

Between noon yesterday and this morning, 62 more people have overcome the disease in the province, which brings the accumulated discharges to 2,376, while those admitted to the province’s hospitals are 192, of whom 64 are in Intensive Care Units (ICU).

Nursing homes continue to be of concern, where contagions continue to accumulate among users and staff, as the number of deceased residents continues to increase. In the last 24 hours, 16 new cases of Covid-19 have been registered throughout the community among care home residents and six among staff, leaving the numbers of those affected, respectively, at 1,784 and 546.

Likewise, nine of the 18 deaths that have occurred in the autonomous territory – that is, exactly half – were residents of nursing homes. 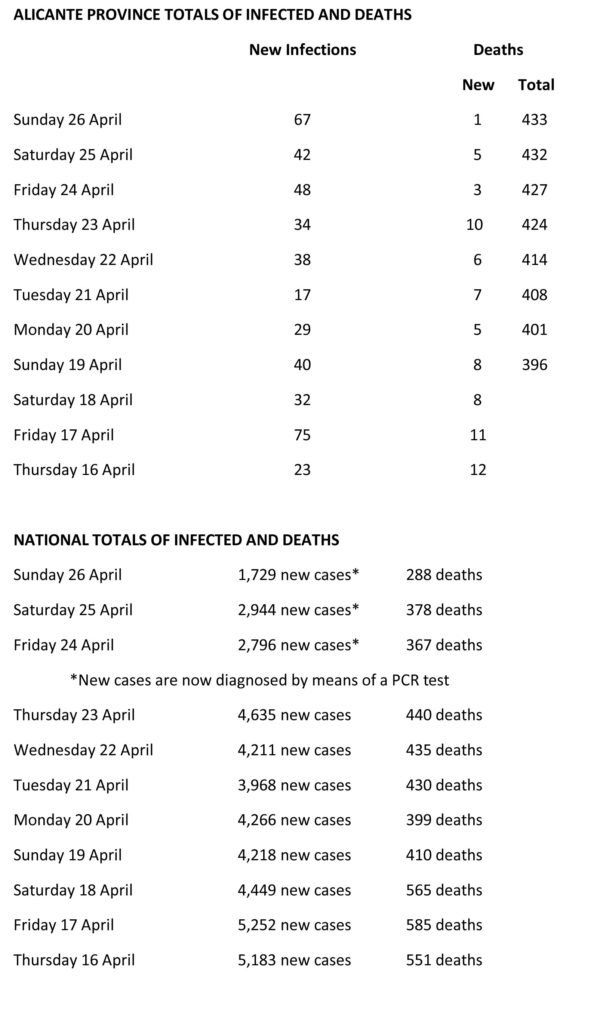