Chinese Shops in many parts of the region are taking measures to reassure the public and mitigate the phobia that has been generated as a result of the coronavirus, as Asian bazaar and restaurant closures continue to spread throughout the province

In the stores and restaurants that remain open many of the staff have begun to protect themselves from the virus with masks and latex gloves and even screens, to keep a distance between their customers, while many others have closed eith citing staff holidays or with no indication of when they are likely to reopen.

A message that is displayed in the windows of many Chinese businesses across Elche, Alicante, Torrevieja and other smaller towns in the area says:

“We feel that we need to use the masks to work. The reason is to better protect the entire population, because the Covid-19 virus has an incubation period during this period it can also be spread. The use of masks will reduce that spread. Thanks for your understanding”.

The proprietor of a Mobile Phone shop in the region told the Leader that he thinks such measures should be extended to all establishments in order to help contain the virus, but he regrets that they are not put into practice throughout Spain.

One local business has erected a clear plastic screen around the till so as not to have contact with the public. “I spend all day in front of people, I also have to protect myself,” one cashier said.

Chinese business owners say that the virus has affected them badly and while many have closed those that are able to remain open are being forced to lay off staff.

Ji Binbin, a local community leader said that even more Chinese businesses are expected to close in the coming weeks for fear of the spread of the coronavirus with many of them feeling that Spain is going to become a second Italy in terms of the rapid further spread of the disease.

Binbin added “As there is no forecast to re-open in the short term, they have had to reach agreements with their workers. In this there is no conflict because they expect to be re-hired when the businesses reopen”. 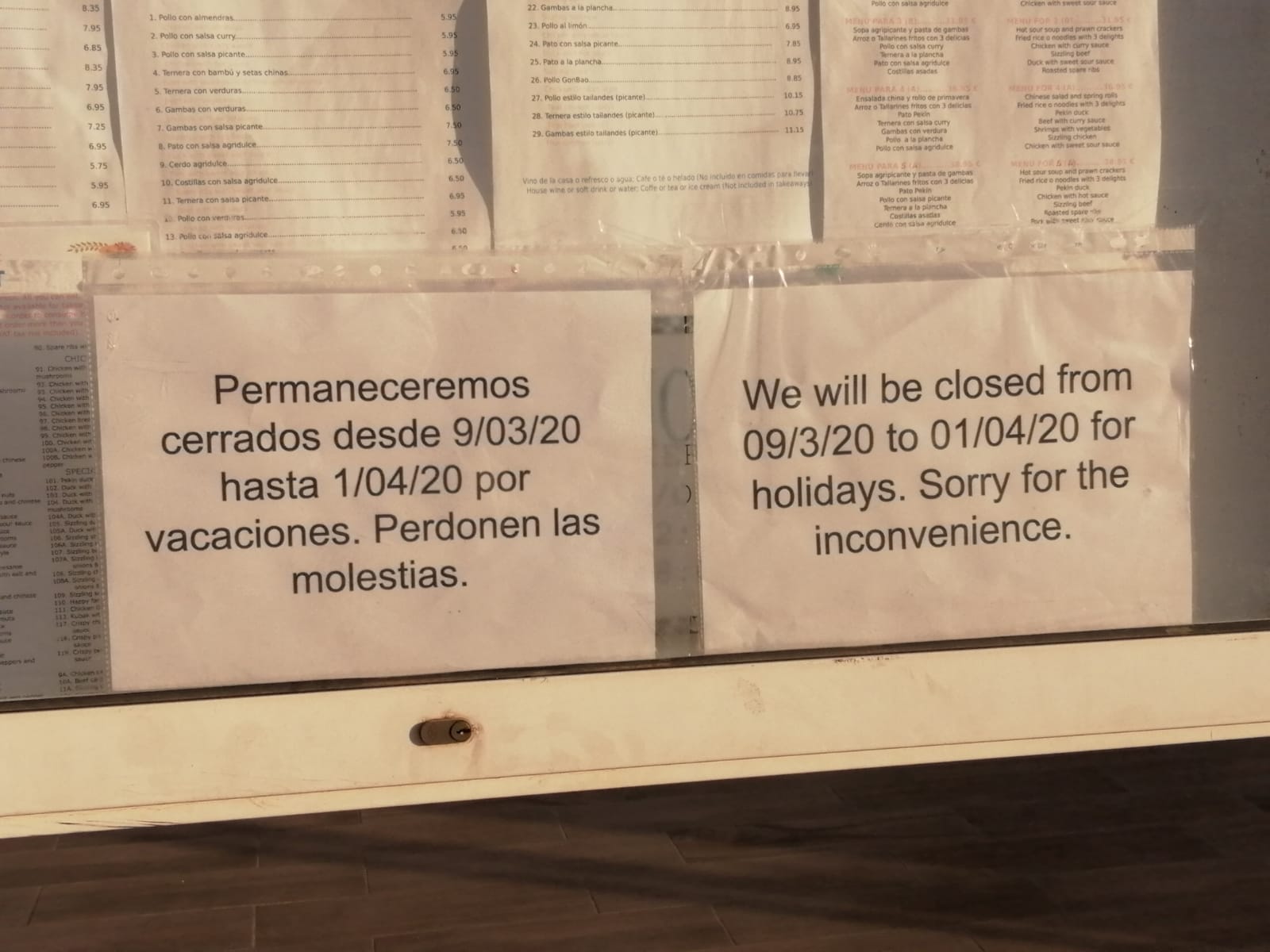 In many of these concerns they have chosen to simply place posters explaining that they are closed for holidays, as seems to be the case in Cabo Roig, PLaya Flamenca and La Zenia where Chinese Restaurants started closing on Monday and Tuesday of this week, all displaying similar notices referring to those staff holidays.

However a source told the Leader that the reason is much more likely to be that of customer confidence and shortages of food and other products, because the large majority of such businesses and their suppliers tend to import their goods direct from China.

As a result of the production slowdown in that country stocks are in extremely short supply with most being retained in China itself to feed the national population. Ports in Alicante, Valencia and Barcelona are therefore reporting a major slowdown in imports from China saying that they have dropped by as much as 50% from the amounts that came into the country earlier in the year.