Over 20,000 people demonstrated in Orihuela city centre on Saturday in protest at the imposition by the Valenciana Generalitat of the Law of Autonomous Multilingualism, the new regulations on teaching Valencian in schools, introduced by the Minister of Education, Vicent Marzà.

Protests also took place in many other towns and cities across the Community including Valencia, Alicante, Elche, Castelló, Requena, Utiel, Villajoyosa, Villena and Elda where a further 75,000 people are estimated to have been on the streets.

The demonstrators included Parent/Teacher Associations, many organisations representing the general public as well as Mayors, councillors and representatives of the Partido Popular, Ciudadanos and Vox including Isabel Bonig, Emilio Bascuñana and Eduardo Dolón, in addition to the mayor of Alicante, Luis Barcala.

Orihuela hosted the main march, convened by the Federation of Student Parent Associations (FAPA) Gabriel Miró of Alicante, under the slogan “For the right to choose our language”, which, according to Local Police sources, was attended by about 20,000 people.

People say that they are fighting for linguistic choice in schools and centres of education and the imposition of the curriculum in the Valencian language in such institutions does not respect the wishes of parents, who want their children to be educated in Spanish.

In a statement read out to protesters in front of the Orihuela Town Hall, the spokeswoman for parents, Sonia Terrero, demanded the repeal of the Multilingualism Law for the teaching of Valencian in the educational system, which is scheduled to be introduced during the coming school year. 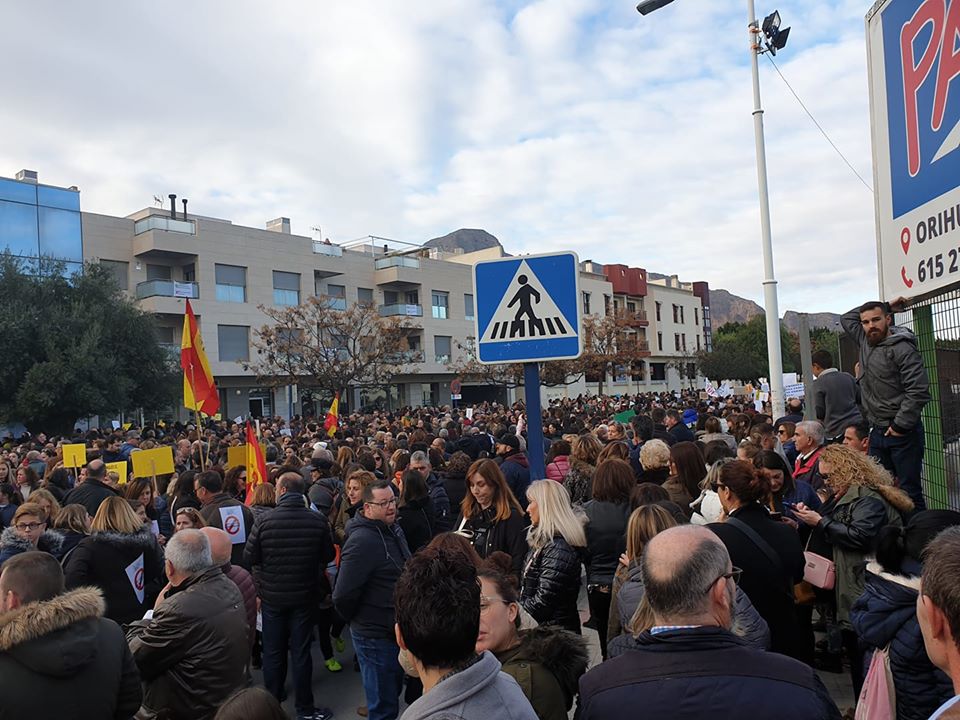 The statement went on to say that “the right of article 27 of the Constitution, which recognises freedom of education must be applied, and which is also recognised by the United Nations Organization, stating that parents should have the right to choose the type of education of their own children”.

President of the PP in the Valencian Community, Isabel Bonig, again reiterated her offer to parents to make available the legal services of the PP.

Social unrest in the region is growing day by day, and with it, the feeling of abandonment and isolation.

First it was the torrential rains of DANA during September and October, which devastated lives, properties, agriculture and many livelihoods, then came the Government’s water policy which fears the closure of the Tajo-Segura transfer, and which will lead to shortages of water in the region, and now, the multilingual decree that greatly affects an area where there is half a million people of Spanish-speaking predominance.

Many people now say that the feeling of abandonment that prevails in the Vega Baja will spread across other regions and provinces if President Ximo Puig does not succeed in stopping it. And that cannot be done with promises alone, only with a change in attitudes, especially that of the current Minister of Education, Vicent Marzà.

But while the protest was not the massive turnout expected by organisers, it was still the largest demonstration that has taken to the streets, in opposition to the government, in recent years, and to ignore it would be a serious mistake.

Valencia, we have a problem.