Sundays Remembrance Day Parade and Service on the 10th November 2019 was held at the Capilla de las Palmeras (Church of a thousand palms) in Mil Parmeras by the Orihuela Costa & District Branch of The Royal British Legion, at which many UK service association attended with their individual Standard (Flag) and included the Royal Naval Association Torrevieja Branch.

The service was conducted by Pastor Keith Brown and joined by dignitaries and officials of Pilar de la Horadada and Orihuela Ayuntamiento’s and the Royal British Legion.

The 100’s of congregation that exceeded the church capacity spilled into the grounds around the church and were hardy enough to brave the chilly northerly wind to listen, view and immerse themselves in the ceremony via a huge temporary screen and audio system whilst seated, all of which was graciously provided by the Pilar del la Horadada Ayuntamiento and is tremendously appreciated by all that were there.

This 75th anniversary of 1944 WWII was musically supported in the church by The Royal British Legion Phoenix Band and resoundingly assisted outside the church by the Torrevieja Pipes & Drums created awesome pride and pageantry while leading the parade of all the Standard’s to the church for the service and from the church after the service. 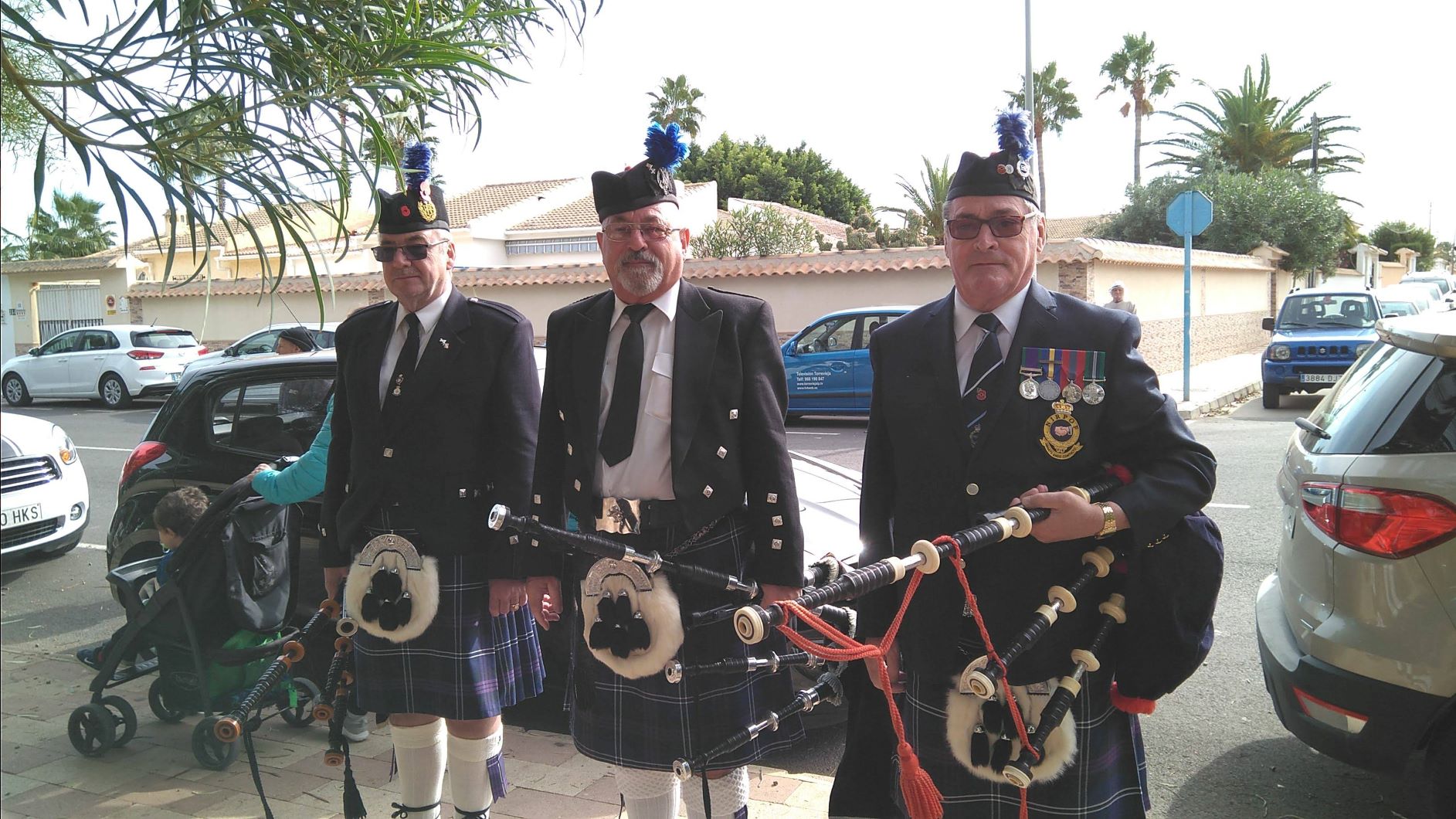 The ‘Lone Piper’ played some spectacular traditional laments during the laying of the poppies and wreaths, which reaffirmed the nostalgic tradition of ‘Remembering The Fallen’ and being ever grateful for their sacrifice by all affirming “We Will Remember Them”.

All the Standard bearers performed their roll on the procession both to and from the church with tremendous fortitude by maintaining dignified control of their respective standard in what can only be described as a ‘howling wind’.

As like other associations, the Royal Naval Association Torrevieja Branch are committed to demonstrating their dedication in upholding traditions and showing their sign of respect by parading their Standard and members attending not only UK but also Spanish official ceremonies.

Offertory proceeds from the amicable band of collectors went to The Royal British Legion Poopy Appeal. 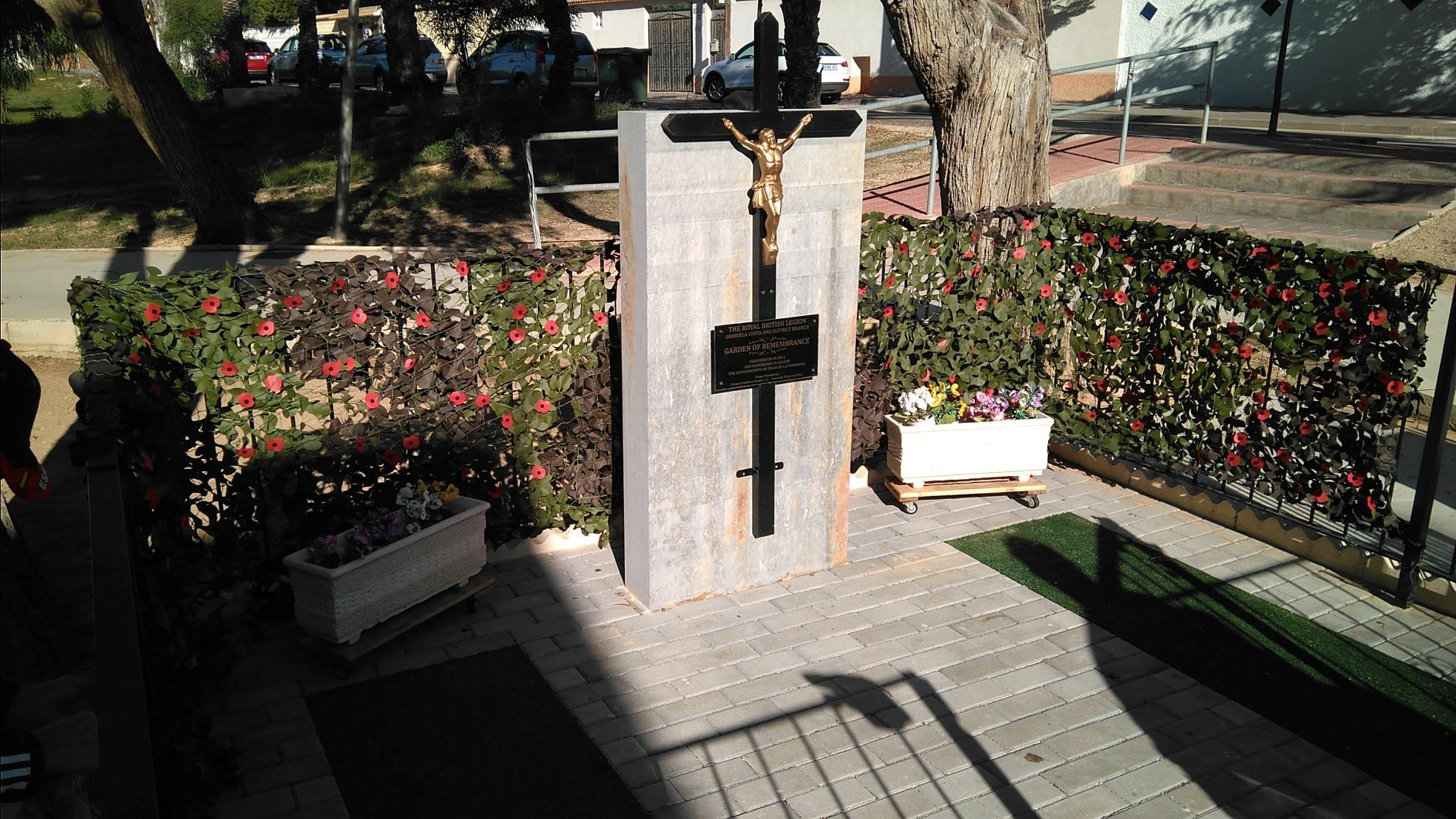 Father Richard conducted the service which was attended by dignitaries and officials of Torrevieja Ayuntamiento and the Royal British Legion.

This 100th Anniversary of the first ceremony that was inaugurated by King George V was musically supported during the service in the church by the Torrevieja Royal British Legion Concert Band and once again the Torrevieja Pipes & Drums provided outstanding music during the marching parade of Standards and the ‘Loan Piper’, who performed terrific renditions of laments during the formal laying of the poppy’s. 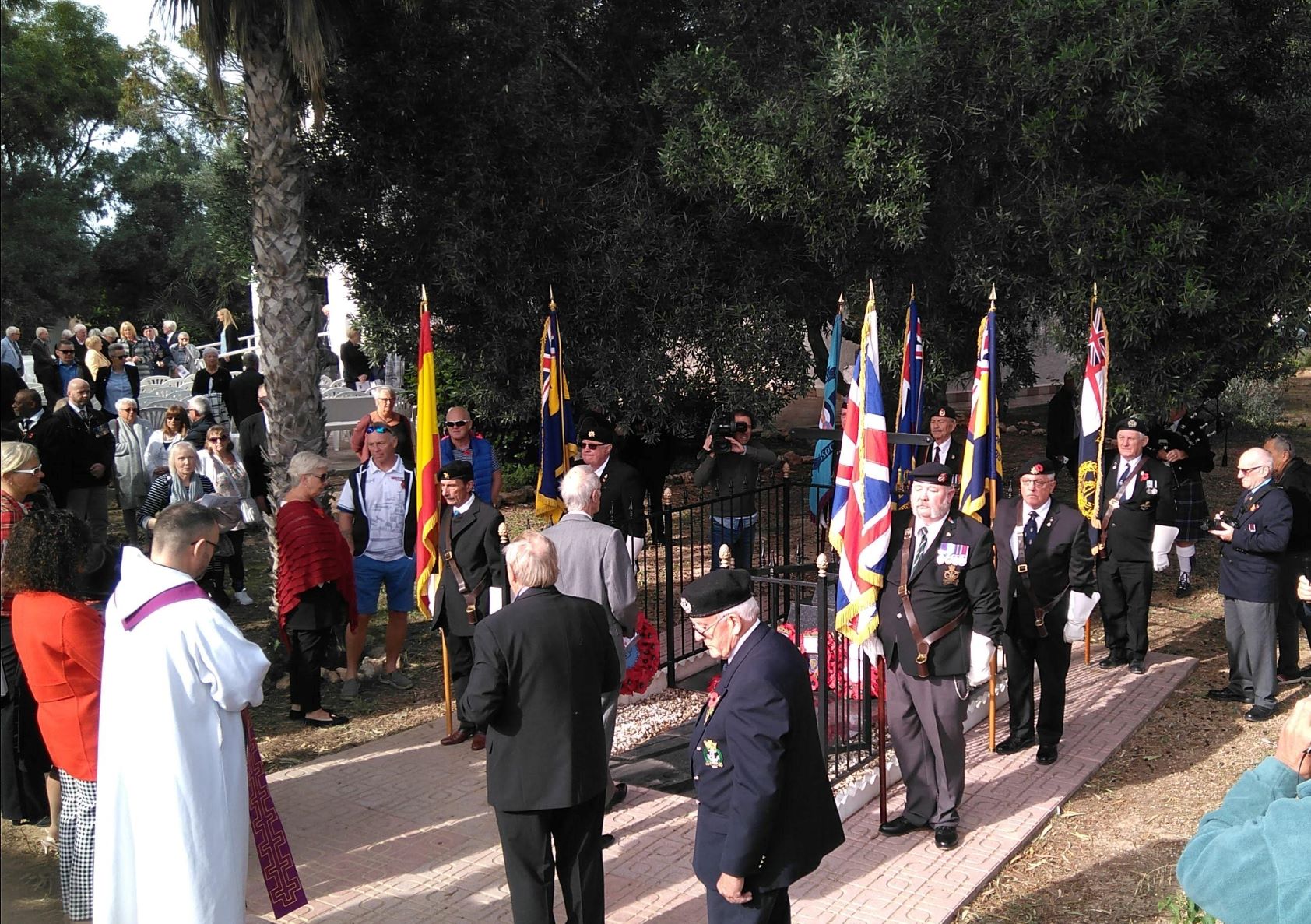 Offertory proceeds via the enthusiastic band of collectors went to The Royal British Legion Poopy Appeal.

It was a time for all to reflect and join in the act of Remembrance through the prayer and affirmation:

They shall grow not old,

As we that are left grow old,

Age shall not weary them,

Nor the years condemn,

At the going down of the sun

And in the morning,

We will remember them.

“Long may the tradition and sign of respect & gratitude be maintained”

It is no surprise that the Torrevieja Branch of the Royal Naval Association attend many formal events along the Costa Blanca and Costa Calida coast line as they are located between the two Costa’s and their members are formed from people who live along the coastal region between Alicante to Cartagena.

Subsequent to the Armistice Day parade and service the Royal Naval Association Torrevieja Branch members gathered at the Che Loco Restaurant at El Chaparal for a superb buffet meal and lots of convivial conversation.

Photos of these events and more information including that on Armistice Day & Remembrance Sunday can be found at www.rnatorrevieja.com

These events are just some of the many formal and informal events that take place during the year with the Royal Naval Association Torrevieja Branch, who also meet on the first Wednesday of each month as a membership and support forum.

With over 20,000 members across 300+ branches in the UK and overseas, we are a family of current and former Naval Service personnel, relatives and supporters of our country’s Royal Navy.

Whether we are catching up with friends at our regular social events; fund-raising; advising on welfare and employment matters, or just providing an arm around the shoulder, our natural willingness to help others stems from the tradition and camaraderie that only Naval Service life can instil. Everything we do is inextricably linked to our core values

Join Us – Our web site www.rnatorrevieja.com

To join us or get more information about this friendly and engaging group of people, even if you are Non-military or serving/veteran Merchant Navy or other nations Naval personnel who are all welcome to join and attend functions as an Associate Member, then contact either the Chairman Paul Edwards on 618644934, Membership Secretary, Danny Kay  on Tel 966716274 or email rosendanes@yahoo.co.uk  or the Secretary Margaret Forshaw on Tel 966921996.