AN earthquake measuring 4.7 on the Richter scale has hit Spain – in Costa del Sol areas of Marbella, Torre del Mar, Malaga and Torremolinos – one of TWENTY FIVE reported!

Emergency services were on standby but no injuries or damage has been reported.

In the wake of the earthquakes businesses took precautionary measures of evacuating staff.

The National Geographic Institute reported 25 earthquakes of less intensity were recorded from midnight on Friday in the area of Olvera and Pruna.

The epicentre was three miles from the town of Pruna, about 39 miles from Marbella.

Reports of the earthquake were also felt in Cordoba and Seville, capital and Camas, along with other Municipalities.

The earthquake has been confirmed by the National Geographic Institute.

In Olvera, eight kilometres from the epicentre, it was reported terraces and buildings shook. In Montellano, reports of ‘rattling, jerks’ were reported.

A resident in Malaga said the Terremoto was the first in 32 years.

The emergency services of Andalucia received calls from Cadiz, Seville, and Malaga following the 4.7 earthquake, and other ‘quakes felt.

The 112 centre in Andalucia said data from the National Geographic Institute (IGN), reports the earthquake occurred at 11.35am on Friday, at a depth of five kilometres and epicentre northwest of Olvera.

The tremor was initially located in the Sevillian Municipality of Pruna, with a magnitude of 4.7 degrees, although the usual review of the calculations made by the IGN technicians placed it in the province of Cádiz.

The town of Cadiz recorded other seismic movements of less intensity. 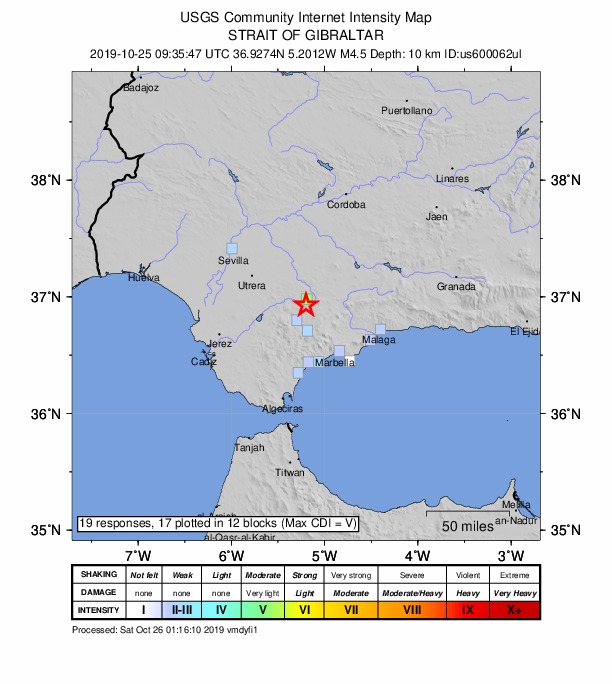 The Junta de Andalucia issued a ‘keep calm’ message which was echoed by the Andalusian Institute of Geophysics, which described the quake as a ‘microtremor’ – and part of a seismic swarm.

A spokesman said energy was being released on a phased basis – which was safer than having a build-up – which could culminate in a big earthquake.

Earthquakes are increasingly occurring, including in and around areas of the Costa Blanca and Costa Calida regions, with a plethora of activities reported during recent years.