A game that commenced with fireworks off the pitch and ended with a shock loss for leaders CD Montesinos at Saturday’s evening kick off at the “Cauldron”.

As early as the second minute, a deliberate hand ball in the Monte area gifted a pacey Bigastro side the lead. Keeper Carlos got a firm hand to the strike, but was unable to stop the squirming ball creeping over the line. Critically, that single goal was to remain an albatross around Monte’s neck for the rest of the game.

The half subsequently developed into an overly feisty affair with card happy referee adding to the dismal (from a footballing perspective) game, and although Monte huffed and puffed they failed to get back into. There were several half chances to draw level, but on the whole, Monte lacked the application that they showed last week against Crevillente.

The half petered out with Bigastro grimly holding on to their slender lead. 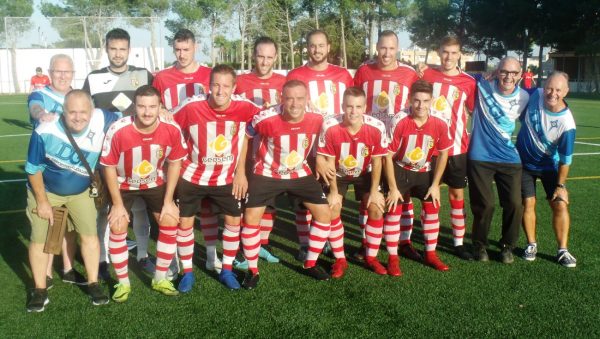 Monte for their part, tried doggedly to break down the opposition’s stubborn resistance and even when, later in the second half, Bigastro were reduced to 10 then 9 men via the shower of yellow and red cards, they couldn’t overcome a team that had simply “parked the bus” and showed only vague attacking intent.

A game that started with a bang pretty much ended with a whimper and Monte reluctantly gave up the early league top spot.

The Man of the Match was Adrian, sponsored by Penya DGL Los Montesinos