The repair of the Pascual Flores schooner, restoring it once again to a sail worthy condition, will cost 900,546 euros, according to a report commissioned by the City Council.

The report, which has cost the council just over 18,000 euros, examines the condition of each part of the replica ship that was originally built on a Torrevejense beach in 1917.

It concludes that the boat, moored in the port of Torrevieja, is in a state of “semi-abandonment” with only minimal maintenance work being carried out on it, tasks such as cleaning and checking waterways, but no painting, equipment startups, waterproofing or bilge. The cost includes putting the ship into a dry shipyard or boathouse, where the hull can also be examined for possible damage.

However, the City Council has agreed that all repairs will be carried out by the La Nao Foundation  which has also restored many other historical replicas such as the Nao Victoria, El Galeón and the Nao Santa María.

Although the agreement is yet to be finalised it is understood that the foundation will receive an annual economic amount – not yet determined – for a total of five years, to enable it to repair the ship and make it navigable once again, based on that budget of just over 900,000 euros.

Any additional funding will be met by the foundation itself in exchange for the use of the schooner for visits and travel around the world. 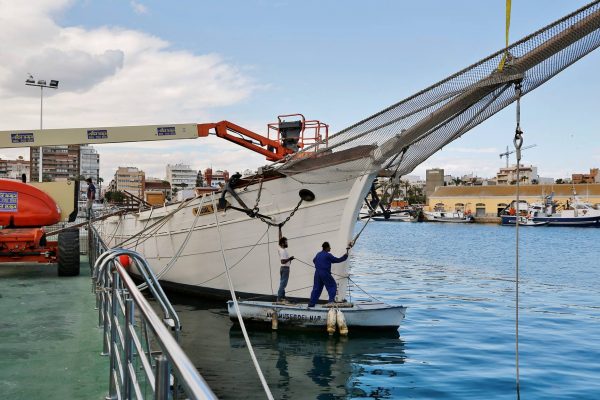 Once it is navigable the boat is expected to remain in its base port of Torrevieja for 120 days in the year and 180 days in national or foreign ports, and another 60 days at sea.

The La Nao Foundation estimates annual operating costs of 458. 000 euros per annum to which almost 100,000 must also be added for its maintenance. The foundation would be responsible for both under the agreement to be signed with the Torrevieja town hall, as well as for the crew.

Last week the Municipal Institute of Culture Joaquín Chapaprieta authorised the payment for the report on the state of the ship. The councillor for Culture, Antonio Quesada, said that “we are pending a budgetary modification that will go to an extraordinary plenary session or the next ordinary.”

The ship has been moored in Torrevieja since 2015 after being overhauled in the port of Algeciras. Apart from tests in 2008, the journeys to and from Algeciras are the only occasions that it has put to sea in all that time.

Despite the cost of repair the foundation recommends repairing the Pascual Flores for the historical significance it has and for the fact that the cost of its overhaul is significantly less than the cost of its construction, started in 2005 and completed in December 2008, that was in the region of 4.5 million euros.