Los Montesinos, Alicante, was hit by an earthquake of 3.2 on the Richter scale on Saturday evening that led to hundreds of people within the Vega Baja area turning to social media.

The earthquake at 23.13 shook houses in Los Montesinos, Algorfa, San Miguel and surrounding towns – it being the second ‘quake to hit the area in recent days.

Many worried residents affected contacted me – asking if any damage was caused by the tremor.

Hundreds of people were enjoying an evening in Los Montesinos town when the tremor began – that lasted a few seconds.

The 3.2 earthquake epicentre was west of Los Montesinos. 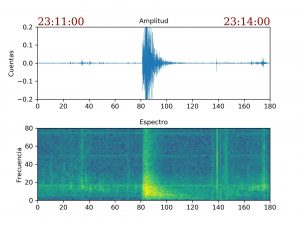 I reported just this week the shocking 6.6 Richter scale earthquake on March 21, 1829, in Torrevieja.

A warning that a Tsunami could occur was made by natural disasters expert Ignacio Aguirre, at a conference in Cantabria.

“Faced with the brutal devastating capacity of Tsunamis, there must be preparation strategies, before they occur. We must have a knowledge of the real risk that exists,” he warned.

Ignacio Aguirre, researcher from the Cantabria Institute of Environmental Hydraulics, spoke in the wake of southern Spain and the eastern Mediterranean (Balearics) regularly have seismic activity, although relatively low Richter scale readings.

A Tsunami warning centre, the National Geographic Institute, Spain, issues alerts to the General Directorate of Civil Protection and Emergencies.

An early warning system of the Indian Ocean, Caribbean Ocean and Atlantic Northwest and Mediterranean Ocean, was formed – a system in place, which includes Spain.

In 1829 the 6.6 Richter scale magnitude earthquake in Torrevieja also affected Guardamar and Almoradi. 386 people died and 375 were left injured.

If your vehicle´s ITV is about to expire, and...

The little people of San Miguel have been getting...

A lucky little dog has been rescued from the...