Recently the Provincial Grand Master of Valencia, RWBro Michael Shilan visited the annual summer school for underprivileged children in the depths of the countryside of Alicante. This is a slight departure from usual as the summer school is usually based in Guadalest, however, that has closed for a while for complete refurbishment.

The new site is located deep in the heart of the country in a very wild, yet beautiful location. The school itself is held in a stunning old building built in 1777 and still going strong. It has a marked similarity to ‘The Alamo’ being very much in a Mexican style.

This summer school financed entirely by the Provincial Grand Lodge of Valencia, has sponsored many children from around the Province from underprivileged backgrounds for the past few years. Each year the number of children has been increased, starting with just fifteen and now up to fifty-four.

These children are mainly from El Preventorio children’s home in Real de Gandia but this year we have also taken some underprivileged children from across the Province, who have been selected by the Red Cross

This is because there is an age restriction on visitors to the school and this year there are more than usual very young children at the home. As they were sadly unable to attend other children were invited to fill the places. These children come from all over the world including, Columbia, Guinea, Romania, Bulgaria, Ukraine, Russia, Hungary, Kazakhstan, Byelorussia and Venezuela and including Spain of course.

For ten days they will attend the summer school at absolutely no cost to their parents or carers. This money has been raised by the Masons holding dances, raffles, Ladies nights, donations and a lot of hard work throughout the year. Just last week five thousand euros were raised by the Provincial golf day. This one event sponsors around fifteen children. It should be noted that this is not a holiday, though to most of these children it will seem like one, many of them having never been to such a place before. However, they are expected to work and learn and are kept on the go from eight in the morning until midnight so they have very full days. 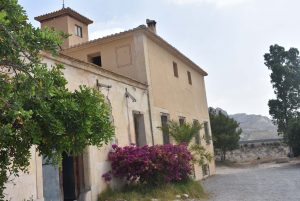 This year the whole school has been decorated in the style of Harry Potter’s school Hogwarts, and a great deal of effort has gone into making this as realistic as possible. It is incredible what they have achieved with a shoestring budget but with lots of enthusiasm. This is largely due to the efforts of Sr Juan Carlos Ortuño the owner of the Guadalest site who has moved his whole organisation to ensure a continuing service which the children can make use of and enjoy.

The Provincial Grand Master and his wife Muriel were extremely impressed with the location, building and facilities on offer. They had a tour of the very informal classrooms which were also designed to the theme of Harry Potter, even to arriving via platform 9 3/4!

There are lessons throughout the camp far too numerous to list them all but including, hiking, swimming, cookery, flora & fauna recognition, quidditch (???), night trekking, orientation, archery, making rockets and producing a newspaper.