10 boats and their crews turned out for the SAMM race day on November 4th, the most for a day in the Autumn season.

Again the format was for Average Lap Racing with the majority wanting a race time of 75 minutes. The wind was a light westerly of 4-6 knots when the race started and all boats got away well except little Rosita with Mick on board who was 3 minutes late over the line and the Sailfish ‘Sirocco’, Nik, Leon and Trefor, who eventually gave up trying and did not start.

The ‘Omega’, Brian and Kent’ soon took the lead hotly pursued by the others and there were some exciting moments as various boats jostled for position when rounding the marks. 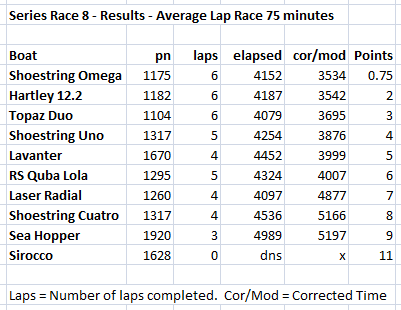 In the light wind, which had backed to the south west by the finish, the fastest boats completed 6 and the slowest 3 laps.

During the lunch break the wind went fully south, so blowing straight onshore, and started to build reaching 10 plus knots as the boats were trying to launch and get out to the start line. This required some very quick tacks back and forth across the channel, with the ‘Omega’ and Topaz getting in each other’s way. When the ‘Omega’ finally got out she unexpectedly turned back and did not compete.

By the 2.30pm start the wind had veered back to SW and increase to at least 12 knots and the waves started to build. Another great start by all boats which were flying around the course so fast the Race Officer had the support boat move a buoy to increase the length of lags 2 and 3. Again there was some close competition throughout the race, especially as the faster boats were lapping the slower. 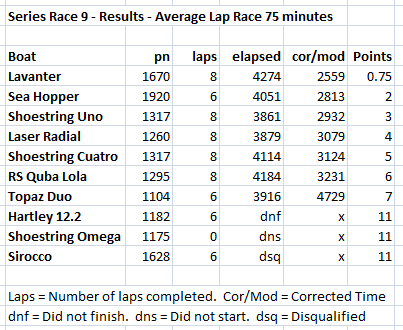 Close to the race end ‘Sirocco’ failed to go through the start/finish gate and, despite being alerted to the fact surprisingly carried on, she had to be disqualified. The ‘Topaz’ capsized 3 times in quick succession but Julian managed to right her each time and continue to finish the race.

Then the Hartley 12.2 capsized right on the last mark before finishing. Don managed to get her back up twice but could not for the third time as some of the lines had become tangled. A great shame after such a great race. He had become very cold, and had to be taken aboard the support boat, which also took his boat in tow, and bought both safely back to shore. All thanks to those on duty, helm Martin and crew Dave and Graeme.

In the increased wind five boats completed 8 laps and the other two finishers 6. The winner was the largest boat competing Lavanter, Robert and Ian, with the smallest boat Rosita a close second.

No photographs were taken as some people had left whilst Don and his boat were being recovered.

ONE OFF THE BUCKET LIST… aka The Pascual Flores…

CHRISTMAS IS COMING FOR SPANGLES!