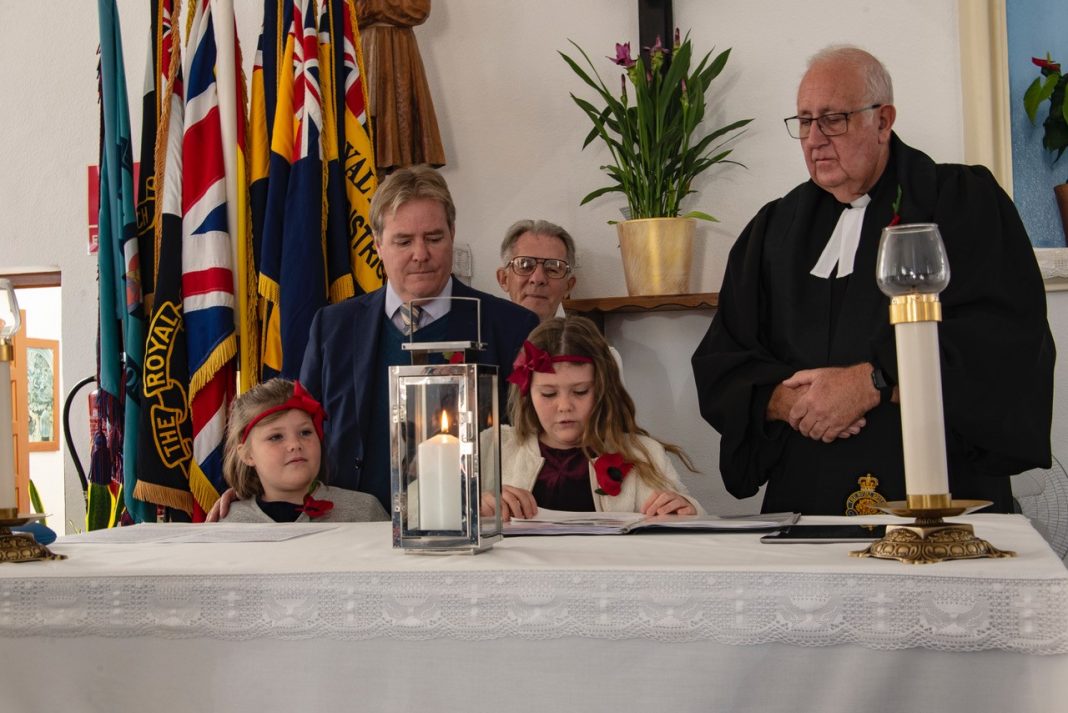 On Sunday, the National Service of Remembrance was held at the Cenotaph on Whitehall, London, to commemorate the contribution of British and Commonwealth military and civilian servicemen and women involved in the two World Wars and later conflicts.

This year, with Remembrance Sunday falling on the 100th anniversary of the end of the First World War, the event held a special significance, no more so than here in Spain where services were held across the entire length of the Costa Blanca. 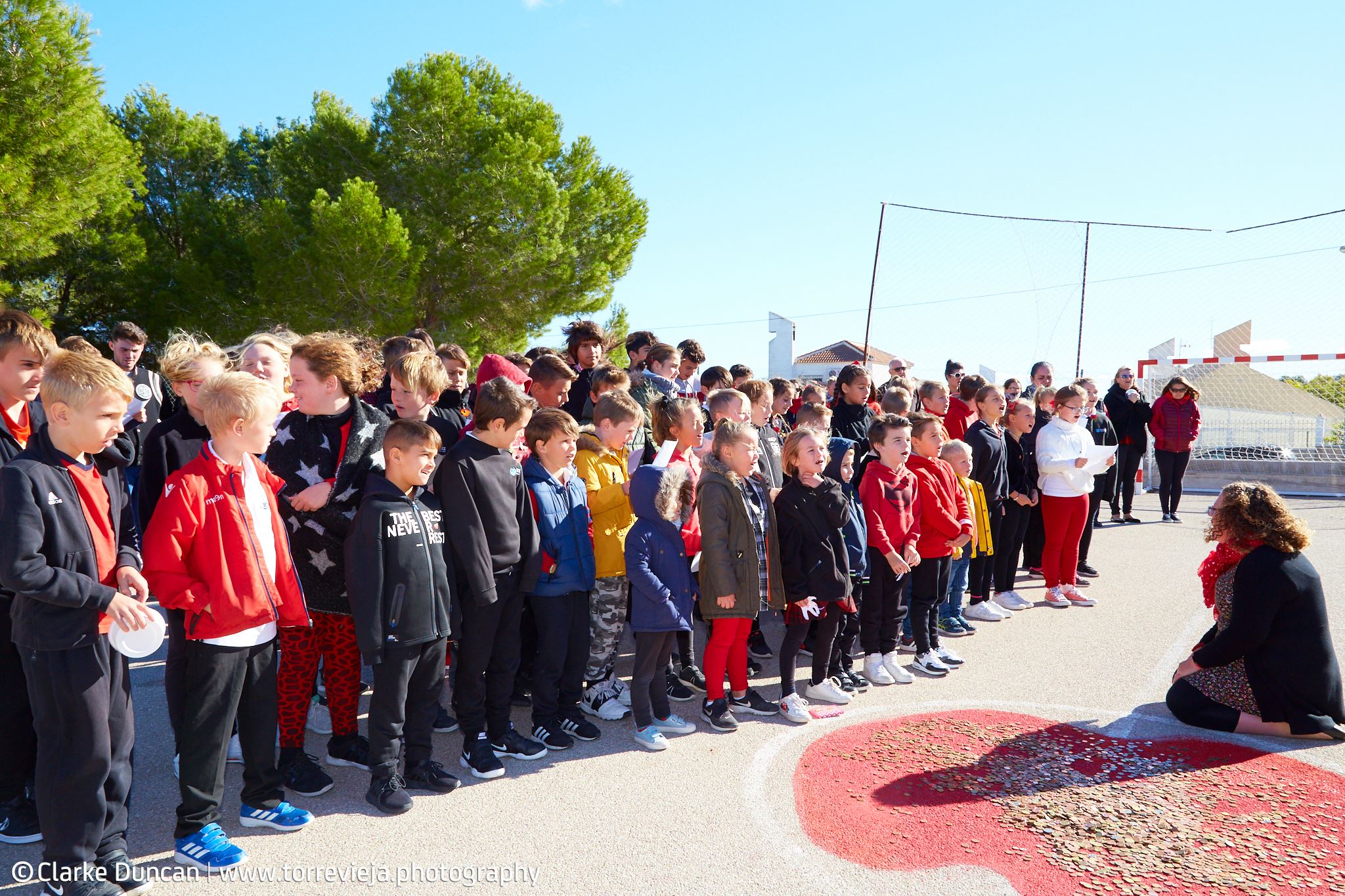 The first local event took place on Friday where children, staff and parents, from the Phoenix International School in San Miguel de Salinas, joined with members of The Orihuela Costa Branch of the Royal British Legion to pay their respects to the fallen. Accompanied by The RBL Band the children sang a selection of hymns and songs from the period, after which they read poems written by and dedicated to First World War veterans, as they took part in an outdoor service led by the RBL Chaplain of Spain North, Pastor Keith Brown.

On Saturday the commemoration moved to Torrevieja where the local RBL Branch held ceremony in a packed La Siesta Church, into which the RBL standards, as well as those of RAFA, RNA and RMA, were escorted by the splendid Torrevieja Pipes and Drums. 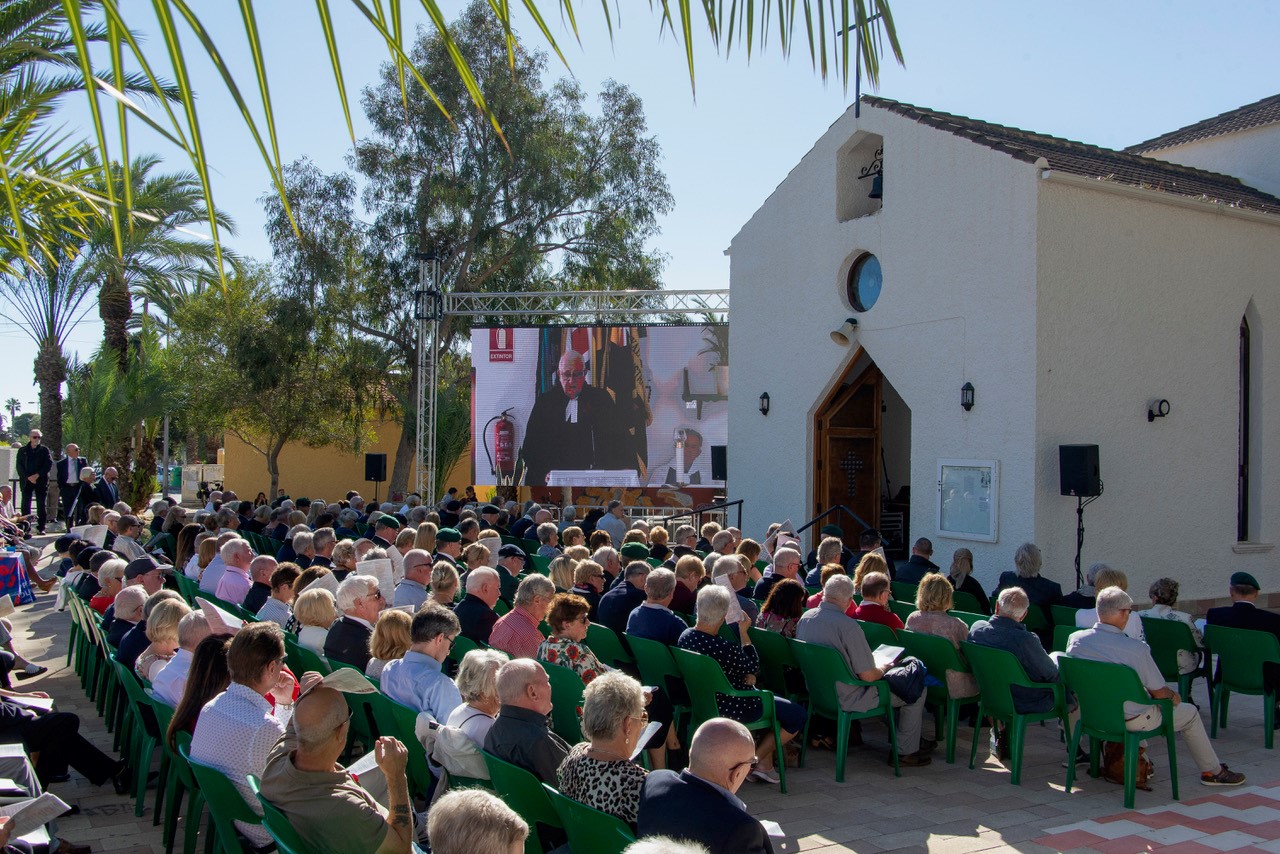 As they formed up in front of the altar the service got underway with a prayer from Father Richard Seabrook, officiating chaplain, followed by the RBL Exhortation and then, most significantly of all, the Last Post played by Ian Gibson of the JB Brass Band.

The music was provided by the Royal British Band in Spain led by David Last and the Crescendo International choir.

In his sermon, Fr Richard spoke of his connection to WW1 through his grandfather who served in the trenches in France before moving to Palestine as he proudly held aloft his campaign medals and photographs The lessons were read in English and Spanish by branch President Gill Burden and Debbie Winston after which a poem to the fallen was read by Carol Stockwell. Andy Kirkbride sang ‘Bring him home’ after which the standards, followed by dignitaries and wreath holders, moved to the cenotaph located in the church garden area, where the wreath laying ceremony was led by the Branch President. 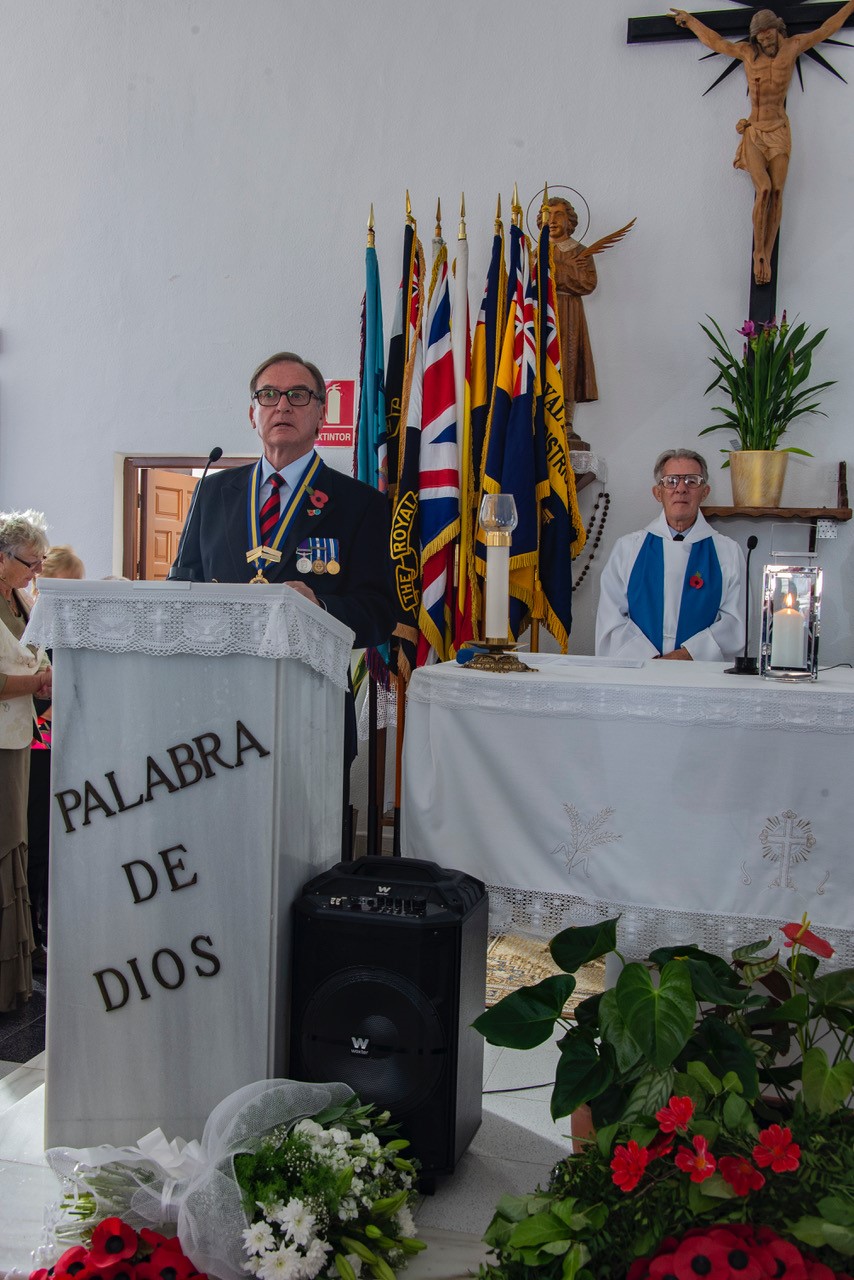 A carvery lunch followed for members of the RBL and their guests at the Club in Quesada.

Sunday morning’s focus of Remembrance was at the Capilla de las Mil Palmeras where the Orihuela Costa and District Branch held its annual service led by Pastor Keith Brown, with the event being relayed both on a large screen and by sound to a congregation of over 600 people.

Guests included the British Vice Consul Sara Munsterhjelm and the Chairman of the RBL Spain District North, Don Cubbon. They were joined by the mayor of Pilar de la Horadada, Ignacio Ramos, and five of his councillors along with Orihuela councillors Sofia Alvarez and Luisa Boné.

Gerald Turner of Blevins Franks, who sponsored the Order of Service, represented the business community, along with Anne Martinez Hoth, of Quiron Salud Hospital. 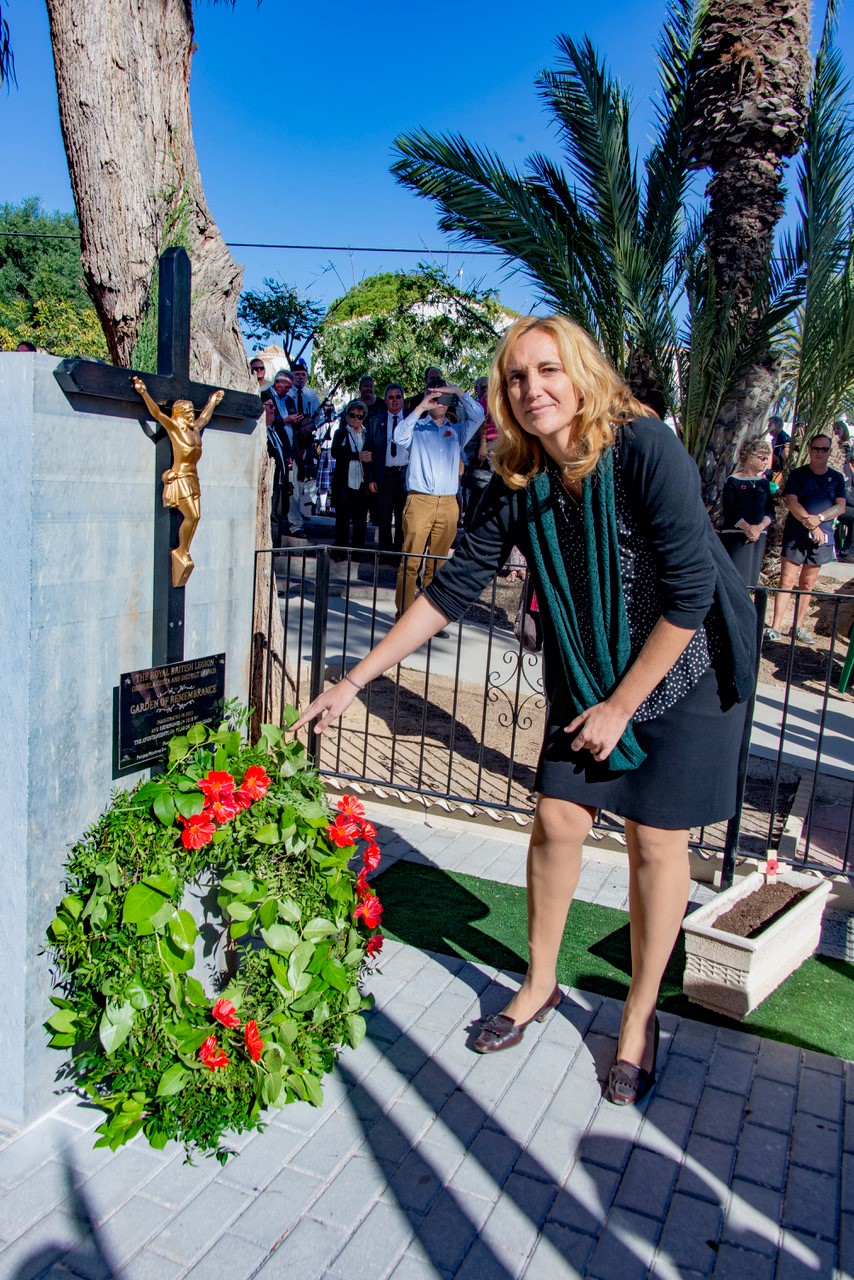 There was also a moving performance of ‘Bring him home’ faultlessly sung by RBL supporter Stevie Spit. The RBL Band in Spain again provided the musical accompaniment to the hymns led by their MD David Last.

Prior to the service, the RBL standards, as well as those of RAFA, RNA and RMA, were led to the church by the splendid Torrevieja Pipes and Drums.

As the service got underway the congregation was addressed by Mayor Ignacio Ramos. He said how pleased he was to have such a close relationship with the RBL and how much he, and the people of Spain, shared with their thoughts and sentiments at this time. Pastor Keith Brown responded by thanking the people of Pilar de la Horadada and Orihuela for the wonderful support they have provided in the holding this event.

The last post was performed by the Costa Blanca’s premier bugler Ian Gibson while the lament, ‘Lock Rannoch’, was played by the Torrevieja Pipes and Drums. Stevie Spit then brought the house down with his solo of the classic Remembrance melody from Les Miserables “Bring him home.” 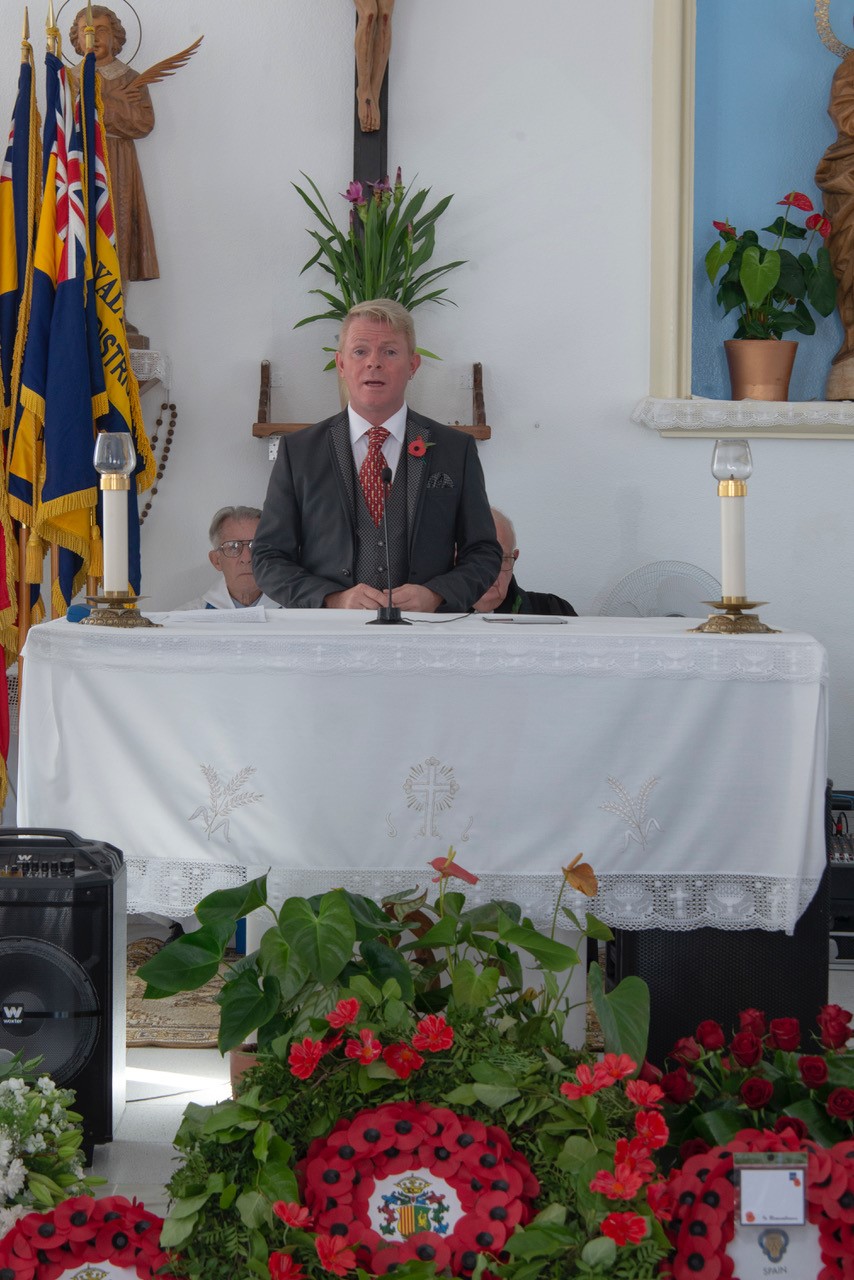 Two local schoolchildren, Angelina and Leticia, carried the peace candle to the altar, reciting a short prayer after they had done so which was also warmly received.

The service was concluded with the National Anthems of Spain and the United Kingdom after which the ceremony moved out to the brand new Garden of Remembrance, completely refurbished by the Ayuntamiento of Pilar de la Horadada, where dignitaries and guests laid their wreathes in remembrance after which branch and members of the public added their own poppy crosses in memory of family members and lost friends.

Flanked by a large number of the general public the Pipes and Drums then led over a hundred and fifty members of the congregation from the church to the Mil Palmeras Olympia Restaurant where members and guests  enjoyed a delightful buffet lunch.

It was on to Campoverde for the final event of the weekend where, on Sunday evening, where once again the event was well supported and following the last post, reveille and the laying of a wreath, many of the congregation stayed behind to enjoy refreshments in the church garden.

The National Service of Remembrance was originally conceived as a commemoration of the war dead of the First World War but after the Second World War the scope of the ceremony was extended to focus on the nation’s dead of both World Wars, and in 1980 it was widened once again to extend the remembrance to all who have suffered and died in conflict in the service of their country and all those who mourn. 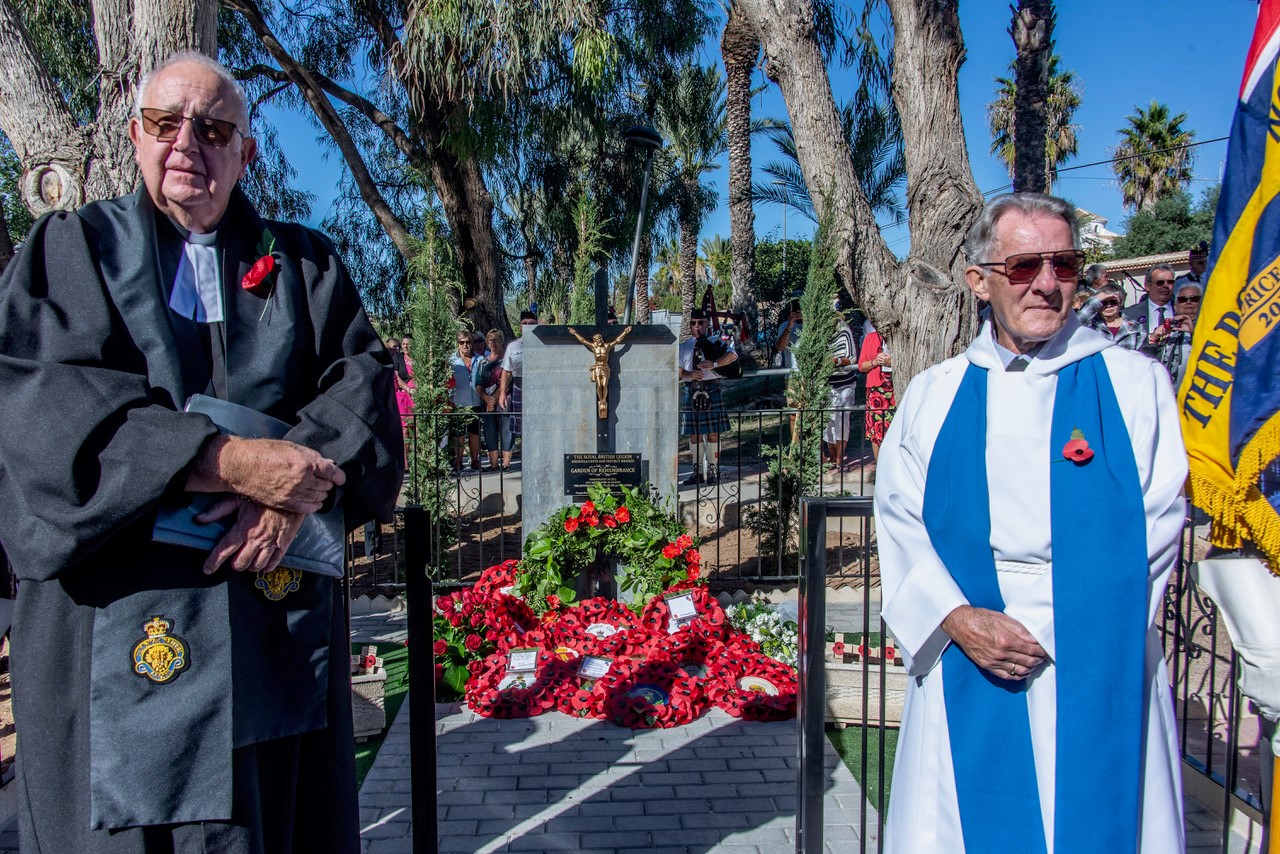 But of course Remembrance is not just about those who fought in the last two World Wars, it is also held in respect of those involved in the many other conflicts worldwide and those who are still fighting for peace and freedom even now.

It is also about all of us learning from the past and resolving to make the world a better place in which to live, and with so many more children becoming involved in the event here on the Costa Blanca we are now rather more assured that the future of remembrance is in increasingly safe hands.