Authorities in Guardamar del Segura are convinced that a third outbreak of fire in just the last four days is the work of a local arsonist. The most recent attack was on Thursday when, according to the mayor Jose Luis Sáez, forest brigades detected to three outbreaks in a small area of pinewood close to the location of the earlier fires.

Fortunately, on this occasion, following the intervention of firefighters from several stations in La Vega Baja, together with the support of aerial facilities, the fires were quickly extinguished

The area of the outbreak is very close to the forest nurseries, according to the Security Councillor, Ana Martinez.

The fire was detected at 5pm and was attended by firefighters from Orihuela and Almoradí, as well as the forest brigades stationed in Guardamar del Segura and Tibi. There was also the deployment of two aircraft which carried out discharges of water across the whole area. 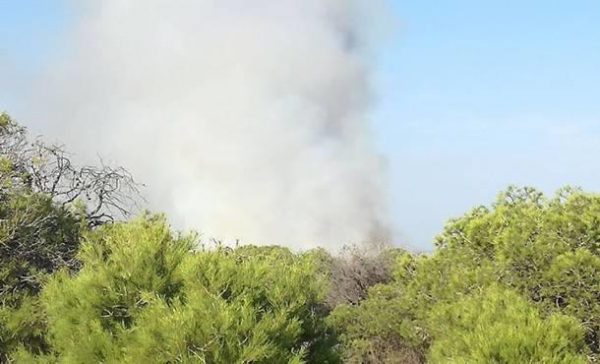 The flames were brought under control by 7 pm, although it surveillance work once again continued throughout the night to prevent the embers reigniting and to ensure that the arsonist didn’t go back to work.

The first fire was discovered on Sunday and was quickly extinguished. It too was initiated at a number of different points. One day later, on Monday, 10,660 meters of woodland and scrubland of the area were destroyed in a protected area which was regularly used by members of the public.

Firefighters were also called on Thursday to a pallet fire outside a factory in Los Montesinos in the Los Perez neighbourhood. Three fire tenders attended the scene from Orihuela together with a support vehicle from Torrevieja.

Together with the continued presence of firefighters at the woodyard blaze in Arneva, Orihuela, the last few days have stretched the local brigades to their limit. A spokesman said that the brigade we desperately needs the authorities to speed up the recruitment of additional staff that they have been promising in recent months before they reach a situation where they simply can’t cope.