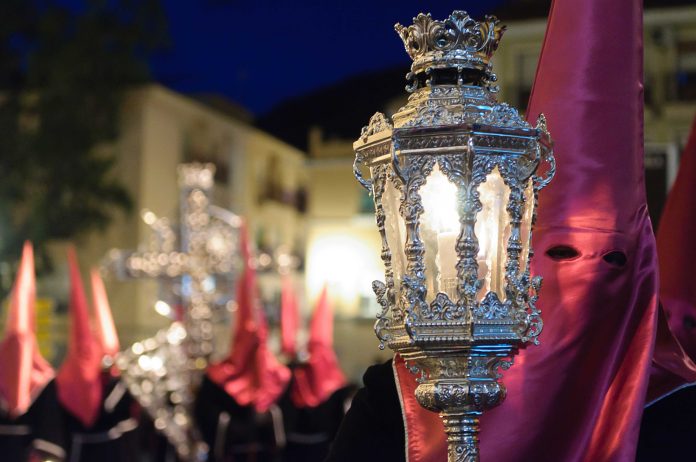 Orihuela’s Holy Week is one of Spain’s foremost religious and cultural events. It was acknowledged as being of International Tourist Interest in 2010 and there are a number of singularities which make it quite different from anything else on Earth. One example can be seen in those traditions which have been passed down over hundreds of years and which continue today.

One of the most moving processions is on Holy Thursday, starting at eleven o’clock in the evening: The Santísimo Cristo del Silencio. (Holy Christ of Silence). This is when one sees two long lines of devotees, dressed in their hooded gowns, covering their heads, walking through the crowds in complete silence. 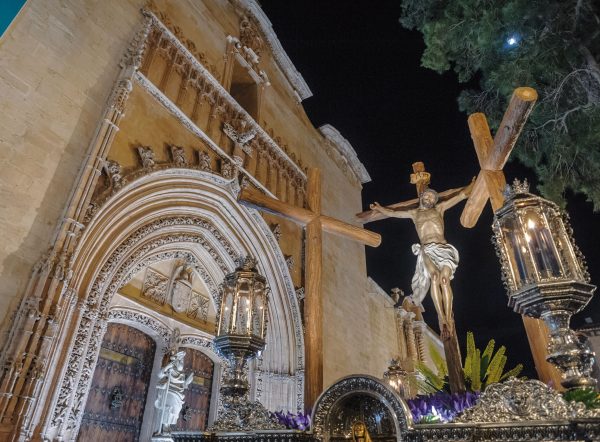 The only light along the route comes from the lanterns they hold, since the city remains in complete darkness after public lighting is turned off on all the streets where the procession passes. This is La Hermandad Penitencial del Silencio, (Penitential Brotherhood of Silence), which originated in 1940, inside one of the city’s three Gothic churches, the Church of Santiago.

This church is home to the only figure on display at this time: El Cristo del Consuelo, (The Christ of Comfort) the work of Jose Puchol (1795).As the figure passes, in the midst of an atmosphere of the deepest respect, the visitor can hear one of the most characteristic sounds of the Orihuela Holy Week, the so-called Canto de la Pasion, (Song of Passion), a transient masterpiece which can be traced back to the 16th Century and whose song of “hoarse angels” has been transmitted by means of the spoken word tradition, right up to our days.

As regards religious traditions, another procession stands out, that of the Santo Entierro de Cristo (The Holy Burial of Christ), on Holy Saturday. Nominated as a candidate for World Heritage classification, this is probably Orihuela’s most striking Holy Week procession.

It can be traced back to the beginning of the 17th Century, when, in an effort to acknowledge the merits, honour, fidelity and love for the city, the city’s governors decided to award the title of the Covered Knight. This honorary year-long post gives the holder the privilege of carrying a black flag with the city slogan and of wearing a dress coat and top hat, along the entire route, as well as inside the Cathedral, as the funeral procession makes its way in. It is a procession of official mourning in which the whole town council takes part. 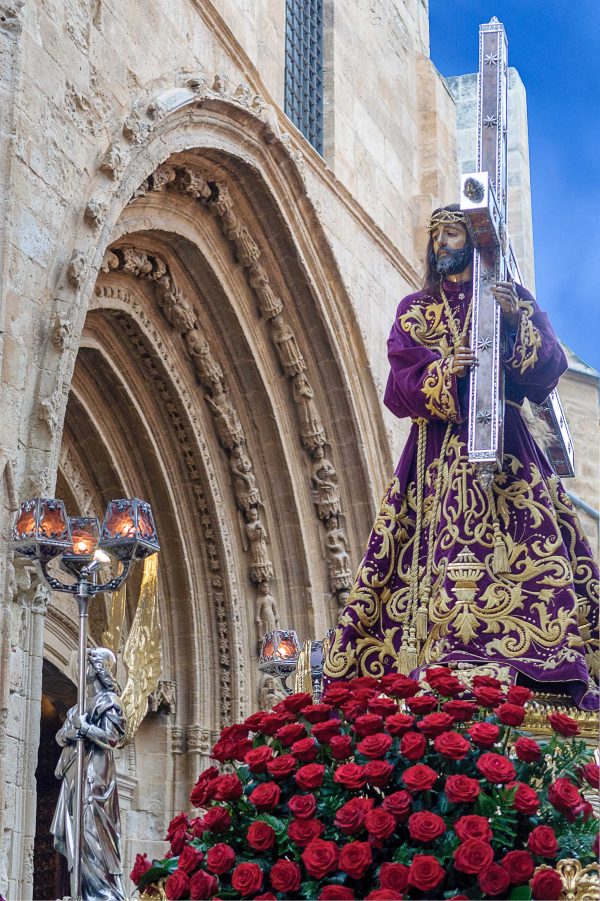 In tribute to this figure, in the square next to the Cathedral, one can see a bronze statue showing a walking man, dressed in a dress coat and top hat, carrying a flag.

There is, however, another aspect to this procession. It is not only the figure of the Covered Knight which stands out here. A striking procession makes its way through the streets, creating an air of great anticipation. It is the oldest procession in Orihuela’s Holy Week: “El Triunfo de la Cruz” (The Victory of the Cross) (1696). It is also known as “La Diablesa”, (The She Devil) with a cross on top of a globe, accompanied by a skeleton on the one side and by the figure of the Devil with breasts, on the other. This tableau, the only one of its kind in the world and of profound significance in the realm of alchemy, is featured every year on Spanish news bulletins.

Another tradition is that which represents the so-called Roman Centuria. Every day a group of Roman soldiers follows on at the end of the procession, with their spectacular, bright costumes. Once finished, it is customary for spectators to congregate en masse in the Plaza del Marques de Rafal, where the Centuria, accompanied by the sound of trumpets and drums, performs the so-called “Caracol” or snail, a circular march, which gets smaller and smaller, as it progresses. This is one of the sights of Orihuela’s Holy Week which simply cannot be missed.

This then, the Semana Santa of Orihuela, is a unique experience. The visual feast of colour and light in the Nazarenes’ tunics, the spectacular thrones or in the sunsets from the Seminary, the wafting scent of incense, the experience of the sound of the “twin” trumpets during the day or the Canto de Pasion at night. There is also the experience to be had by contemplating the extraordinary works of the great sculptor Francisco de Salzillo and so many others. Their realism provokes those who witness the sight, into feelings of pity, a sombre collective mood which envelopes both locals and visitors, just as it envelopes the face of Nuestro Padre Jesus Nazarene, Patron Saint of the city, which brings out, in us all, the Truth in the message of Jesus Christ.