Following an unbeaten run of 5 games at the start of the season, Thader have now gone 7 games without a victory.  But on a cold windy evening at mountainous Novelda last Saturday, they came very close to picking up at least a point.  This was a very different Thader of recent weeks, for they showed imagination, grit and determination from start to finish, but fell short right at the death.

An injury to Miguel and Rafa’s suspension, meant that Juan & Fran were recalled to the starting line-up.  Strong winds were playing havoc with long balls, which were swirling in all directions.

Novelda’s striker Puento gave early intention of his goal threat on 15 mins, when he shot wide of the far post, the first attempt on goal.  On 27 mins, Pedro was hauled down just outside the hosts penalty area, then from the free kick, Lloyd forced a good save.

Some 10 mins later, a wonder goal had the men from Rojales wondering just what had hit them!  With no apparent danger, Puento picked up a loose ball fully 35 yards from goal, spotted Chema off his goal, before taking advantage of the blustery conditions by launching the ball into the back of Thader’s net. 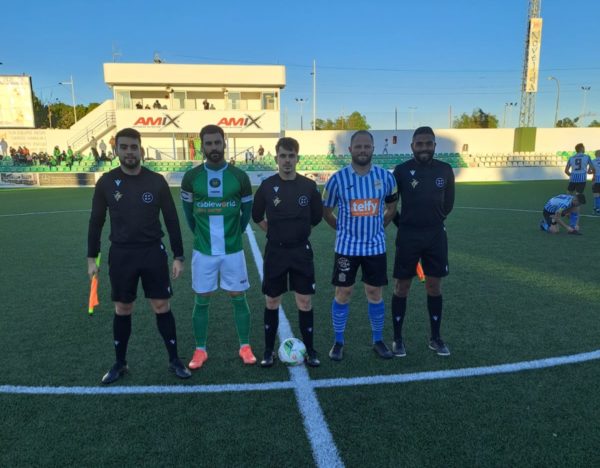 Shortly before half time, all hell broke loose when a Novelda goal was chalked off for offside, then straight from the free kick, Thader equalised.  A well worked move culminated in an assist by Quino to Pedro Juan, who slammed the ball home from an acute angle.  Protestations by Novelda players continued after the half time whistle, as a harassed set of match officials were forced to walk a hostile gauntlet towards their changing room.

I thanked god that the start of a new half signalled the end of mind blowing noisy modern Spanish music, which unfortunately gets louder and more repetitive every season (have they never heard of Pink Floyd?).

Straight from the off, Ruben saw his chip shot narrowly miss the target, as the visitors were spurred on from the earlier goal.  A well-deserved goal gave them the lead on 50 mins.  Once again it was the impressive Pedro Juan who earned the plaudits, this time his half-volleyed shot eased just inside the near post.  This end-to-end pulsating game showed no sign of letting up, when on 55 mins Novelda hit the post, then from the rebound, had a shot cleared off the line.

Man of the match Rosquin forced the Novelda keeper into 2 close range saves, but a defensive error allowed Jorge the chance to equalize for the hosts on the hour mark, which he accepted with glee.  Quino thought he’d scored on 65 mins, but alas the big Thader stiker was adjudged to be in an offside position.  Rosquin saw another effort flash wide, before Novelda had another effort ruled out for offside.  A triple Thader substitution on 75 mins was enforced, as legs were tiring.

With time running out, Novelda hit the post, Thader substitute Rulo had his effort tipped over the bar, then his team mate Lloyd forced a brilliant save from a long-range free kick.  Hearts were broken at the start of stoppage time, when an unmarked Manez, picked up a ball on the left wing, before drilling the ball past a shell shocked Chema at his near post.