The LeaderPutting YOU at the Heart of the Community
Sign in / Join
Subscribe
Home Entertainment Carnivals MOJACAR EXPERIENCES ITS SCARIEST AFTERNOON ON HALLOWEEN THANKS TO AMPA AND MOJÁCAR... 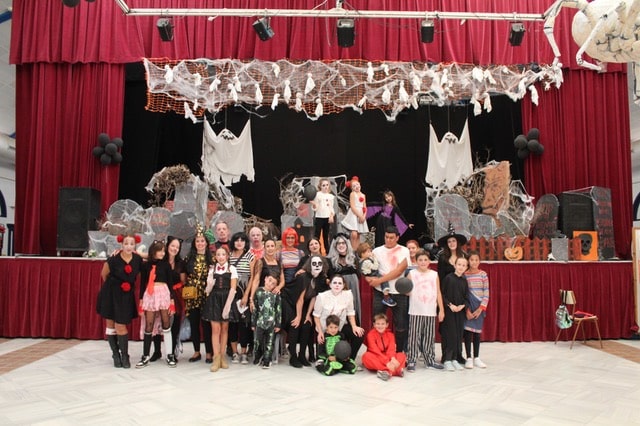 The children of Mojácar have been able to enjoy their own special Halloween party, one of the most anticipated dates of the school year, which brought together more than 300 people, between parents and little ones.

The Multi-Uses Centre was turned into a fantastic and terrifying setting, where the children of Mojácar, transformed into different and chilling characters, spent an afternoon full of fun.

The Mojácar Bartolomé Flores Public School “El Jalí” Pupil Parents’ Association, along with the local council, celebrated this festival with numerous activities: a fancy dress competition and decoration contest, and to continue the tradition of this festival, lots of sweet treats and sweets.

Some 50 children of all ages took part in the fancy dress competition. There were prizes for the best three, and the jury made up of Mojácar Mayor, Rosa María Cano, a member of AMPA and a volunteer parent, frankly had a difficult task.

There were also prizes for the best Halloween decorations made by the infant and primary school pupils. One of the novelties of this edition, which in all cases was a demonstration of the great imagination and skill of each of the participating courses.

It is worth highlighting the games prepared for the occasion, such as the crafts and bat shooting, among others, without missing the witch’s train for the youngest ones and the star attraction, “the panic room”, which was an absolute sensation and a complete success, standing out among all the activities.

An afternoon of terror, and above all sweet treats, sweets and popcorn, much of it provided by the parents themselves.

Paloma Ramos, President of the new Mojácar Bartolomé Flores School AMPA board, highlighted the efforts of many parents, who “have worked with great enthusiasm on this celebration, which is a very eagerly anticipated moment for the pupils.” She also expressed her gratitude for the collaboration and great assistance of Mojácar Council, which through the Festivities Department has collaborated intensively on the success of this celebration.

Mojácar is perhaps one of the pioneer municipalities in the celebration of Halloween. For more than 10 years the Mojácar children have been celebrating this ancient “Halloween night” of Anglo-Saxon origin.

The sizeable British population, always present in the municipality, could have been the reason for this early interest, taking into account that some of the first members of AMPA in Mojácar were English and brought along this tradition. Television and cinema have done the rest, and the truth is that these days, Halloween crept in with strength, to stay on the youngest ones’ calendar.

The “El Jalí” AMPA and the pupils of the Bartolomé Flores school are already thinking about the next Halloween celebration. However, the new team of this parents’ association has arrived with a great deal of energy and new plans in the portfolio. For another magical night like Christmas, they are preparing new activities, as well as others for throughout the school year